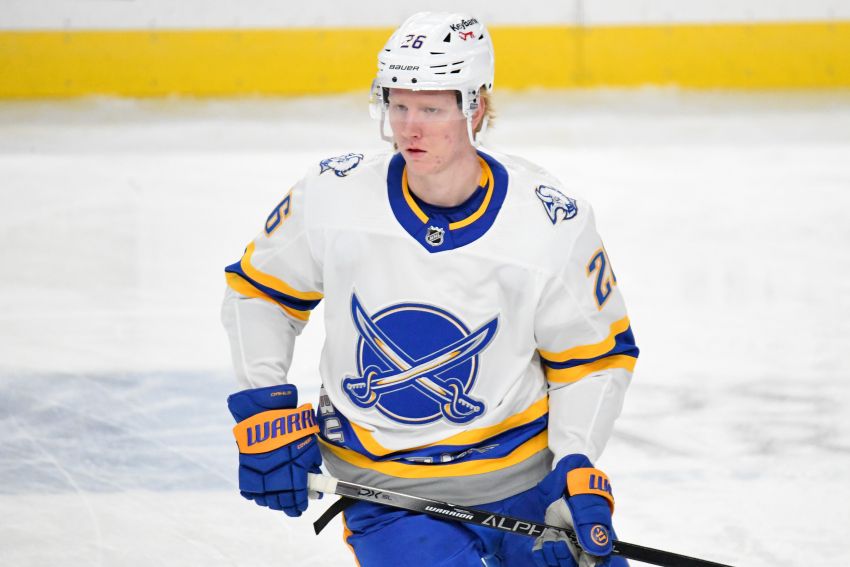 The hapless Sabres endured a brutal weekend, losing by scores of 3-0 to the Philadelphia Flyers on Saturday and Sunday afternoon at KeyBank Center.

At this point, 19 games into another dreary season, simply scoring a goal would be an accomplishment for the reeling Sabres. They haven’t scored since late in Thursday’s 4-3 overtime loss to the New Jersey Devils, a stretch of more than 125 minutes.

“I’m very embarrassed,” Dahlin said on a Zoom call. “This is not acceptable. This is the – it (stinks). It’s the worst.”

“It all comes down to competing,” Dahlin said. “Work for each other, be a good teammate. Right now, we have nothing to lose so we have to work our balls off every game. …

“Someone has to step up and make a hit, make a play, I don’t know. We have to find something.”

He added: “The team we have right now should not be losing like that.”

The Sabres will likely find themselves watching the playoffs for the 10th consecutive year. Only 37 games are left in what has quickly become another lost season.

“We need something – a fight, a goal maybe, something,” said Sabres captain Jack Eichel, who returned Sunday after a lower-body injury sidelined him two games. “Obviously, everyone’s gripping their stick right now. We haven’t really been able to build momentum and play with any confidence. It seems like we’re kind of just holding on every game. It’s been tough.”

The presence of Eichel, the offensive catalyst, failed to ignite them. Incredibly, the Flyers have shut out the Sabres in three of their four meetings this season.

On Sunday, other than a point-blank stop on winger Kyle Okposo, Flyers goalie Carter Hart enjoyed an easy afternoon.

The Sabres have been shut out or scored just one goal five times in the last nine games.

“It seems like we’re working,” Eichel said of the Sabres’ overall problems. “Like, everybody’s in the right mindset, it just doesn’t seem like we’re very connected as a group. We just got to dig deep. I don’t have a cliché answer for you. I don’t know. I’m trying to process this all myself, you know? It’s tough. I mean, if we had answers, I think we would be spitting them out. I don’t know. We’re trying to figure it out as well.

“It’s a really good group of guys in there and we’ve stuck together.”

Coach Ralph Krueger said the Sabres’ struggles have forced him to question his approach.

“The principles at play, or the core structure that we’re searching for, we embrace,” he said. “There’s no negotiation that it works in the National Hockey League – we’ve seen it. But if we drift from it and we’re not able to execute it, then we have to question the processes. We have to question the teaching, the methodology, the way we’re going to attack anything and, yeah, we’re that kind of coaching staff.”

The Sabres actually started well Sunday, holding the Flyers without a shot for the first seven minutes and pumping five on Hart. But they couldn’t muster a shot in the final nine minutes of the opening period.

“There was a semblance of our game early on and we just couldn’t sustain it after the early goal against second period,” Krueger said. “We slipped out of our structure, our culture and that is something that we need to get a better grasp on and figure out ways of getting our game back together.”

Eichel refused to pin the Sabres’ problems on coaching.

“The coach isn’t on the ice,” he said. “We’re on the ice playing together, moving the puck, executing. That’s the way I see it. It just seems like we’re off. It doesn’t seem like we’re on the same page. In a division like this where the checking is as tight as it is, it doesn’t allow for that.”

Eichel stood out just once Sunday, when he couldn’t pick up Couturier in front of goalie Jonas Johansson.

In 22 minutes, 18 seconds of ice time, Eichel registered three shots on goal. He centered Victor Olofsson and Sam Reinhart early Sunday before Jeff Skinner moved up from the fourth line and replaced Olofsson at left wing.

Eichel hurt what appeared to be his ankle in Tuesday’s 4-1 win in New Jersey. But when he was a late scratch Thursday, Krueger said Eichel suffered an injury in the pregame warm-up.

On Sunday, Eichel said he was hurt Tuesday in New Jersey.

The Sabres begin a five-game road trip Tuesday against the New York Rangers.