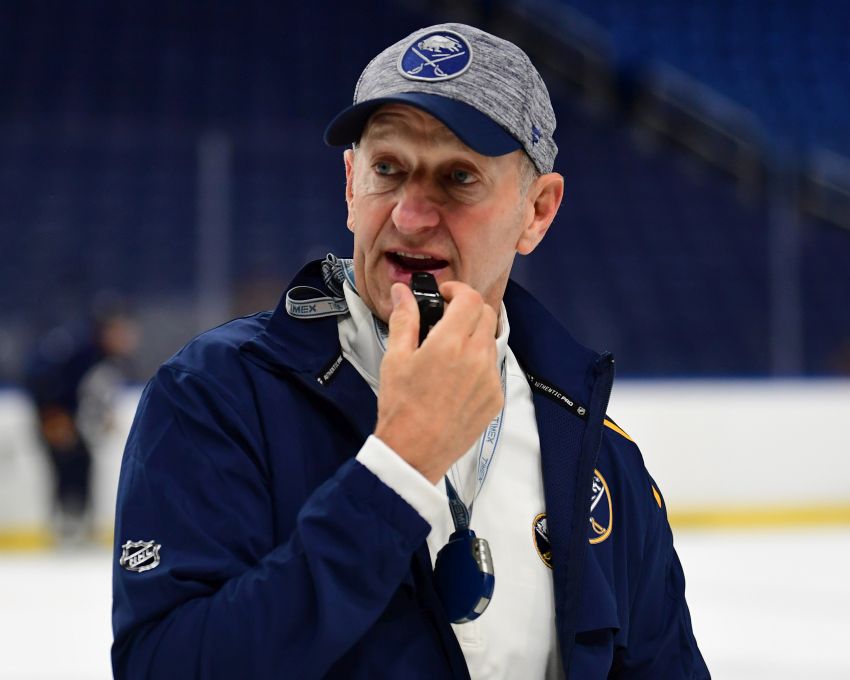 BUFFALO – In just three or four weeks, coach Ralph Krueger would like the Sabres’ brand of hockey to be easily identifiable.

“You underline the fact that we’re playing like this, this is Sabres hockey,” Krueger said Friday following the first sessions of training camp inside KeyBank Center.

That, of course, is no easy task for a new coach, let alone one that inherited a laughingstock.

The Sabres haven’t possessed a positive identity in a long time.

“The big thing is he wants to change the way the Sabres play,” Sabres winger Jimmy Vesey said. “The big thing he’s talked about is playing connected and playing fast. I think we have the personnel to do that.

“If we can play together as a five-man group when we’re on the ice and hang onto the puck and let our skill show through, then I think a lot of people are going to like what they see this year.”

Connection is a theme of Krueger’s. Above the doorway leading out of the dressing room to the ice, he has posted a sign with two swords touching that says “stay connected.”

“It begins off the ice,” Krueger said. “We have to work on that unity and it’s not going to happen overnight. We’ve got new players in the group, we’ve got a new mix coming in here … which takes a few weeks until it settles into a comfortable zone. We’ll work on that naturally.”

Krueger has designed a camp a bit different than his predecessors.

Instead of utilizing Harborcenter, the facility across the street with two ice pads, all but two camp practices are scheduled for KeyBank Center. In the middle of the sessions, the players retreat to the room for more instruction as the ice is resurfaced.

Krueger also didn’t use a white board to diagram while on the ice.

“I thought it was efficient and to the point,” Vesey said of Krueger’s practice. “I think everyone likes how the coaching staff is going about their business so far.”

As Krueger wrapped up the morning session, the first NHL practice he had run in about six and a half years, the players on the ice saluted him by tapping their stick.

“It was positive,” Krueger said. “At the end of the first session, I told the guys, ‘It’s been a long time coming.’”

“We’ve definitely spread everybody out here,” said Krueger, who had youngsters and veterans in each session.

Still, instead of reuniting captain Jack Eichel and 40-goal winger Jeff Skinner, one of the league’s best duos last season, he put the NHL All-Stars on different lines.

“It gives you a shot in the arm,” Vesey of playing with Eichel. “First day of camp, playing with Jack, he’s the captain. For me, I think it helps things go a little bit smoother just because I have some familiarity with him.

“I don’t know many guys here that well so being on the ice with him and being able to talk to him in-between drills or not being afraid to yell for the puck just makes things easier. I thought we had some good chemistry today.”

Vesey, who was acquired from the New York Rangers on July 1, grew up around Boston with Eichel.

The Sabres said in April that Bogosian, 29, would need five to six months to recover.

“He’s just training off-ice,” Krueger said. “We haven’t put a timeline on him yet.”