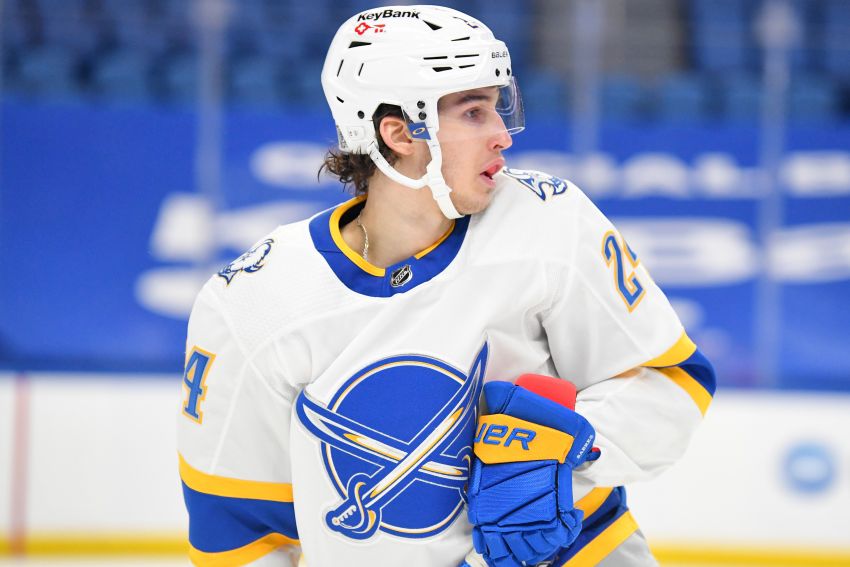 The Sabres have performed downright awful in Buffalo this season, compiling a wretched 2-7-2 record that ranks 29th in the NHL.

On the road, however, they have often looked like a different team, showcasing a calmer style while scoring more goals. They’re 4-3-1 away from KeyBank Center.

“The bubble lifestyle on the road actually is easier than the bubble we’re attempting to live in at home,” said coach Ralph Krueger, whose Sabres begin a five-game road trip tonight against the New York Rangers at Madison Square Garden.

The restrictions the COVID-19 pandemic forced the NHL to implement has made life on the road closer to what the players usually enjoy at home.

“We’ve really tightened the reigns here the last month on our movements even though we’re at home and not going out, not being in commercial buildings, trying to restrict family movements,” Krueger said on a Zoom call this morning. “When you go on the road, it seems to be closer to our normal existence. The players will be able to eat a meal together today for breakfast. They can have a meal with social distancing, of course. But they are eating lunch together, they are eating dinner together. Again, always with big spaces and lots of room.

“But there’s just more camaraderie on the road. There’s more time together. At home, it’s been difficult in that respect but for all teams, so it’s no excuse for us.”

The Sabres have endured a brutal week, losing three straight games. They haven’t scored a goal in more than 125 minutes. Their captain, Jack Eichel, contradicted Krueger’s assessment of his lower-body injury following Sunday afternoon’s 3-0 loss to the Philadelphia Flyers.

How can the Sabres reset things?

“The most important thing is to get back to the fundamentals when we’re unhappy with our games,” Krueger said. “The group has been strong in its communication, first of all amongst the players and with us coaches here. We feel a focused energy today, a refreshed energy also just being in Manhattan and coming into MSG, knowing there’s going to be some fans in the building tonight. All of those things add some bonus strength.”

The Sabres will play in front of fans tonight for the first time this season.

The Sabres have been monitoring Cozens’ workload. The rookie sat out Sunday to rest after playing five straight games.

“I try to take advantage of those days as much as I can, whether it’s just taking care of my body, letting my body rest a little bit,” Cozens said. “Watching the games from up top you can learn a lot. It definitely helps going into the next game.”

Krueger said: “At 20 years of age, we just felt it was a good game for him to take a step back.”

Cozens said he skated on the third line this morning beside center Cody Eakin and Tobias Rieder.

It’s unclear which players will be scratched tonight.

The Sabres scratched Miller on Sunday so they could add some energy after playing Saturday afternoon.

“We have spoken to the team earlier in the season about this potentially happening in compressed portions,” Krueger said. “Now, we didn’t expect this type of compression, the COVID break has added many games into our schedule that weren’t originally there, and so we need to be really cognizant of the energy of the players and health of the players.”