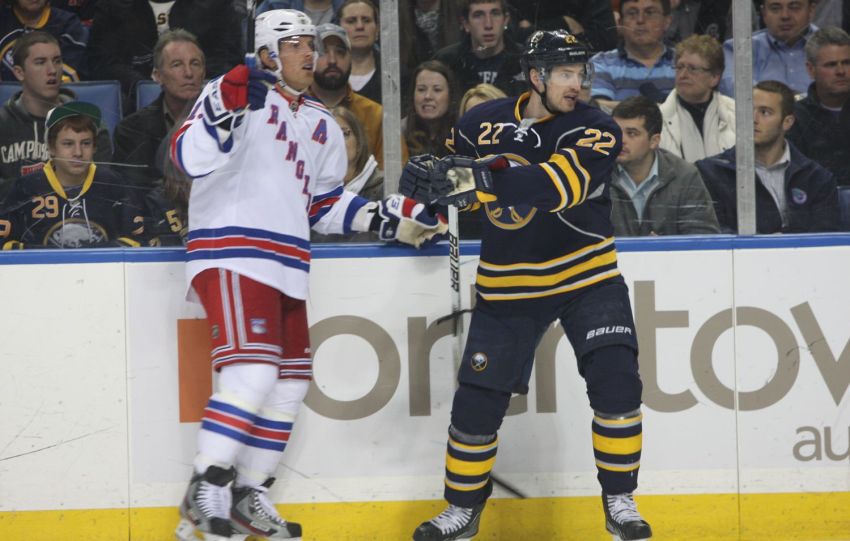 BUFFALO – Now that forward Brad Boyes has moved on, inking a one-year, $1 million contract with the New York Islanders and leaving behind a Sabres team he scored 14 goals for over 93 games, what the heck happened to the former NHL All-Star here?

Boyes, who signed the deal shortly after free agency opened Sunday, once ranked among the league’s most feared scorers, tallying 76 goals over a two-year span, including 43 in 2007-08.

The 30-year-old scored five of his Buffalo goals in his first 10 appearances. By the end, he had become a healthy scratch. In between, he switched between wing and center, never looking very comfortable following a rollicking start on the side.

Boyes, acquired at the 2011 trade deadline from St. Louis, had only eight goals and 23 points in 65 games last season.

“The biggest thing is Buffalo had a lot of depth, they had a lot of similar players – similar players to myself. It was tough to really fit in everybody. I was kind of the odd man out at times. It was what it was. It was a tough year. But I enjoyed being close to home (Mississauga, Ont.).”

Did he get along with Ruff? Boyes paused briefly.

“Umm, yeah, like, we didn’t dislike each other,” he said. “I didn’t have a lot of communication with Lindy. We didn’t speak very often. There wasn’t any friction or anything. There was just very little communication. That’s pretty much our relationship. We were fine. He just never really talked to me very much.”

Is that Ruff’s style?

“I don’t know. I assume that was his style,” Boyes said. “Certain guys he would talk to more and other guys he didn’t. For whatever reason, that’s the way it was.”

Boyes noted in a CBC.ca interview prior to signing he wanted to play for a coach “that I respect a lot.” That respect “starts with communicating with off-ice stuff.”

Naturally, Boyes is excited to join the Isles, a team that could off a top forward spot. Shortly after Boyes signed, they lost 67-point winger PA Parenteau to a four-year, $16 million deal from Colorado.

“(They offer) a position more suitable to my style, a top-six forward, a power-play situation,” Boyes said. “Those are two things that I think are something I’ll be able to put in.”

“I think it’ll be good,” said Boyes, who made $4 million last season.