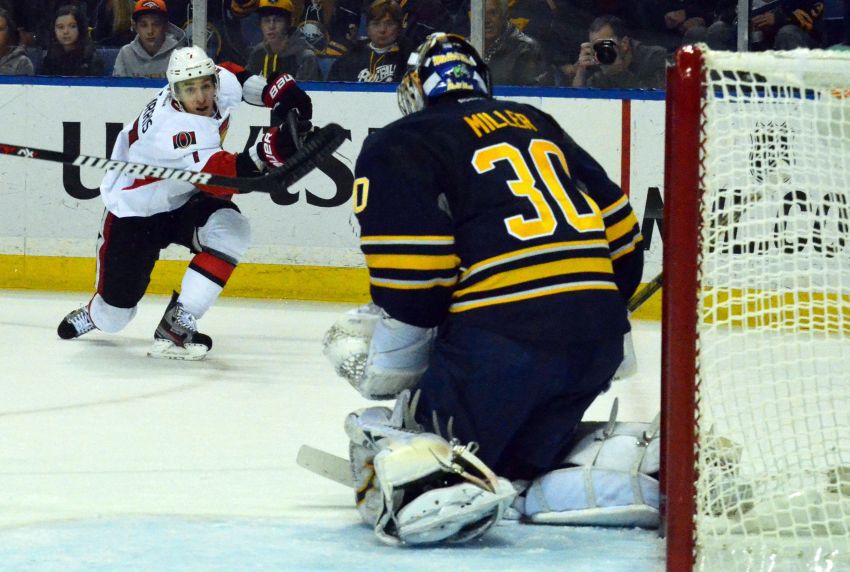 BUFFALO – The Sabres haven’t been able to buck the disturbing trend this season. Their second periods are terrible. During the opening 20 minutes Saturday afternoon inside the First Niagara Center, they dominated the Ottawa Senators, giving themselves a 2-0 lead after one period for the first time all year.

Then, halfway through the second period, the game was tied. The Senators grabbed their first lead at the 18:57 mark.

Incredibly, the Sabres have allowed 37 second-period goals during this forgettable campaign. By comparison, the Senators have let in 13.

Why are they so bad during the second period?

“We’ve got to put together a hell of stretch to just to have a chance to get in the playoffs. To go asleep there for 20 minutes is extremely disappointing.”

The Sabres battled back against the Senators, earning a consolation point. Drew Stafford tied the game 12:06 into the third period, his second goal of the game. Remember, the struggling winger had two goals in 27 games entering the tilt.

But with Christian Ehrhoff off for interference, Kyle Turris scored the winner on the power play, roofing a one-timer from the left circle past Sabres goalie Ryan Miller.

“I just have to tip my hat to Turris,” Miller said. “I thought I was there. That was straight up, bad angle, right over my shoulder next to my ear. So I don’t think I went over and slouched at all. I was pretty tall. I had to cover where I had to cover, and he hit it. I thought we were going to get through that one.”

Second-period goals by Patrick Wiercioch, Chris Phillips and Turris really cost the Sabres the game, though.

“We went away for 20 minutes,” said Weber, whose first goal opened the scoring 8:52 into the game. “Again, we battled back. We can’t be happy (to) keep coming back in games, getting points. We got up 2-0. That’s when you just got to put teams away. We need to win every one we got here.”

Interim coach Ron Rolston thought the Sabres’ first was one of their best periods this season.

“The second was probably one of our worst at the end of the day,” Rolston said. “We must’ve just gotten comfortable.”

Weber added: “I think we got a little comfortable there.”

The Senators entered the game reeling, losers of six of the last seven (1-2-4) with their three biggest stars – goalie Craig Anderson, defenseman Erik Karlsson and center Jason Spezza – all injured.

Weber opened the scoring, his first goal since Jan. 21, 2012 and sixth in his 154-game NHL career. The defenseman had never scored at home before.

Stafford followed at 15:16, directing a shot past Senators goalie Ben Bishop as he fell down in the crease.

“It was good for him confidence-wise, and I liked his first goal, where he was, getting to the net,” Rolston said about Stafford’s performance.

Stafford’s second score – he threw the puck on net from the left boards – handcuffed Bishop.

“Better late than never,” Stafford said about scoring. “But at the same time, I’ve been doing the same kind of things. Just finally to get a break it feels good. It’s just unfortunate we were unable to get the two points.”

The Sabres, who play the Capitals tonight in Washington, had a golden chance to win it late in regulation, but their awful, league-worst power play frittered away a third and final opportunity.

Rolston made the power play a focal point of practice during the three days between games.

“I think we were better in some areas, but not as good as we need to be, for sure,” Rolston said. “That’s got to be a difference-maker in the game.”

Weber added: “Once this group gets it going on the power play, it’s going to be a special group.”

Miller returned after a sinus infection relegated him to backup duty Tuesday.

“I feel fine,” said Miller, who made 30 saves. “It was really more of a case where I really hadn’t slept.”