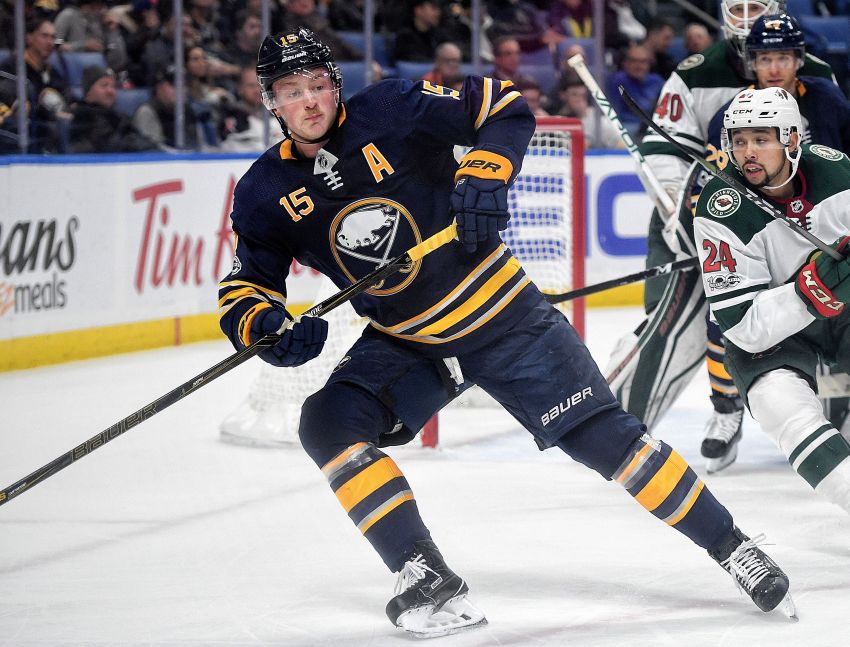 Eichel possesses a lethal wrist shot, a weapon the Sabres sorely want the slick youngster to utilize more frequently. Of course, plenty of players must develop a shooting mentality.

Following the second period of a victory that ended the Sabres’ seven-game losing streak, coach Phil Housley told his team to simply skate and get more pucks on net.

“We had opportunities to attack and we were turning the puck over around their blue line, and we said, ‘Just attack with wide speed and put the puck on net,’” Housley said.

Sure enough, Eichel, who has called himself a “pass-first guy,” skated through the neutral zone and shot the puck at the outside edge of the right circle.

“Jack shot the puck coming off the puck with wide speed,” Housley said of the winning goal in the Sabres’ first triumph since Nov. 7. “Anything can happen.”

After scoring once in 12 games, Eichel has goals in two straight outings and seven overall.

Eichel has been trying to shoot more, and early Friday, he unleashed several wicked shots that missed the net.

“Getting the puck to the net, you never know what’s going to happen,” Eichel said.

The Sabres’ rare triumph, just their sixth this season, was a complete team effort.

Center Jacob Josefson scored his first goal with the Sabres and just the 19th in his 284-game NHL career. The goal 14:16 into the second period, which capped a few strong shifts, was the fourth line’s third in two games.

“You can trace it back to four shifts before,” said Sabres winger Kyle Okposo, who assisted on Josefson’s goal. “We were rolling them at that point, everybody was working hard in the offensive zone.”

On a team with little secondary scoring, the goals from Josefson and winger Jordan Nolan, who scored twice Wednesday, have been “huge,” Okposo said.

So was ending a losing streak that probably felt endless. In recent days, the Sabres have acknowledged they must have more accountability, become mentally stronger and adhere to the game plan.

To Housley, just their third home win this trying season “was a great response.” The Sabres stayed in control all night, only allowing a goal with 19.3 seconds left.

“This team’s been through a lot in the short past here, it’s been a lot of challenges, lot of conversations, it’s time to put things into action,” he said. “I thought the guys responded well.”

Josefson said: “We stuck to what we talked about, it gave us the result we wanted.”

What else went right Friday before the capacity crowd of 19,070 inside KeyBank Center?

“Our puck decisions were really good,” said Okposo, whose long empty-net goal, just his third score this season, sealed it. “We didn’t stray from the game plan at all. Obviously, we didn’t really have any adversity tonight because we didn’t give up a goal (until late). …

“We did a good job just sticking to the game plan and really every line was playing well in the offensive zone.”

Eichel played well all over the ice, looking nothing like the player whose defensive effort has been questioned lately. Early on, he raced back to break up a two-on-one.

“In the last three games, (Jack) has played really well,” Housley said. “He’s made a choice he’s trying to play the right way. He’s been physical, he’s been active in the offensive zone, he’s been bringing his speed, which we continue to focus on through the neutral zone.

“He’s getting a lot more looks right now just because of the way he’s working. You can see he’s very determined right now.”

Eichel outplayed Oilers center Connor McDavid, the superstar he is often compared to. The Sabres held McDavid, the reigning Hart Trophy winner, pointless for only the sixth time this season.

“It’s a desperation game for us,” Eichel said. “We needed to make a statement to ourselves. It’s good to win at home.”

The Sabres play the Canadiens tonight in Montreal.