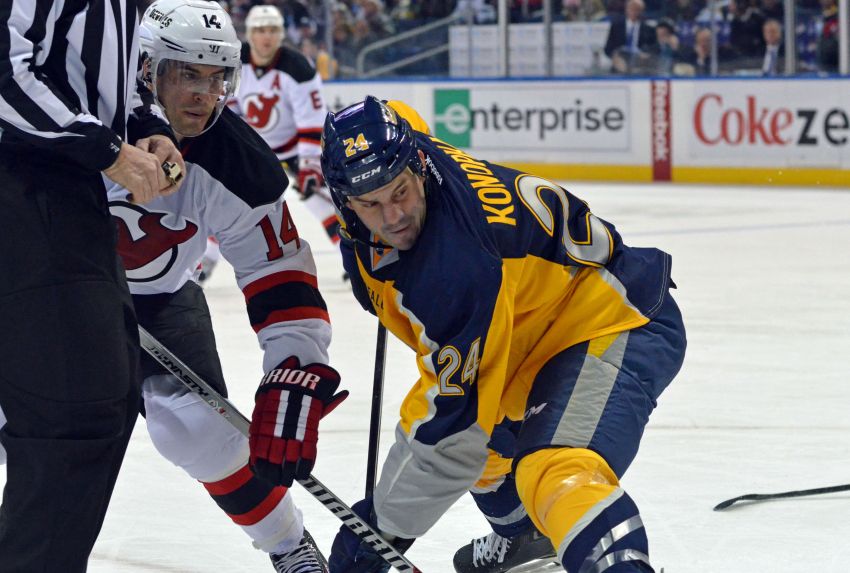 “The tough part was they said they could get me in Sunday,” Konopka, a waiver acquisition, said Saturday prior to his Sabres a debut, a 2-1 win against the New Jersey Devils inside the First Niagara Center. “I said, ‘That’s not going to work.’”

The 33-year-old eventually grabbed a one-hour nap at a nearby hotel before returning to the airport early Saturday morning, where he sat on the tarmac for two hours and slept a little more.

Konopka made it to Buffalo, though, arriving at the FNC as many of his teammates skated. He got on the ice late, and was still shaking hands and saying hello as he entered the dressing room following the morning skate.

Clearly, Konopka considers himself a local and is ecstatic about playing for the Sabres.

When the Minnesota Wild waived him Thursday, his birthday, Konopka immediately thought about Buffalo, which had the first claim.

Konopka said “a lot of people” would be coming to watch Saturday. The joke, someone told him, is he’ll be playing for free because of the ticket demand from family and friends.

“Hoppy’s not a huge flier,” Konopka joked. “So he wanted to drive. So my buddy who was down in Minnesota, he’s going to chauffeur Hoppy up to Buffalo the next couple days. He’s excited as well.”

Konopka, a fighter who also kills penalties and ranks among the NHL’s best faceoff men, said he’s “hard to play against.”

“It’s one of those things I pride myself on other players not wanting to play against me, not just because of the fighting and hitting, but just overall strength,” he said.

The Sabres made one change on the blue line, inserting rookie defenseman Brayden McNabb for Alexander Sulzer.