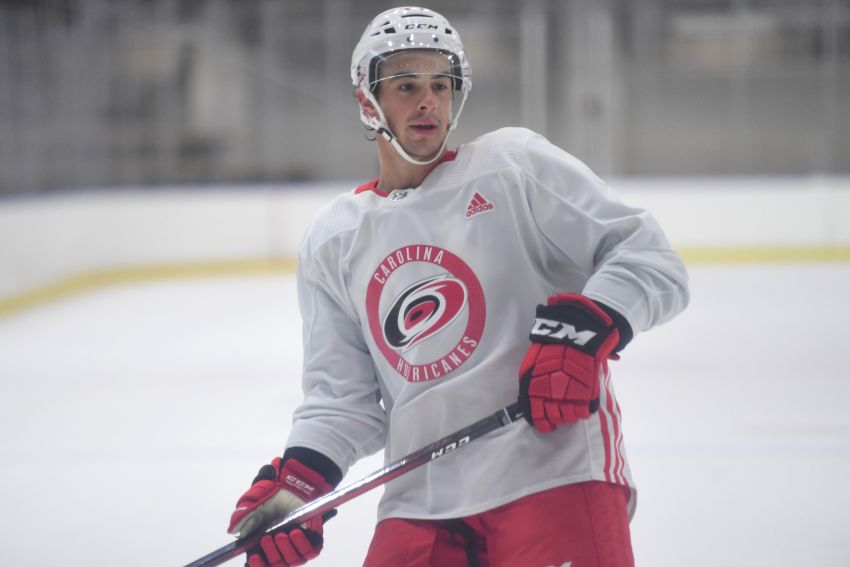 Andrew Poturalski is one of the AHL’s most prolific scorers. ©2021, Micheline Veluvolu

Having established himself as one of the AHL’s premier forwards, Andrew Poturalski enjoyed some intriguing options as a free agent. European teams pursued the Williamsville native earlier in the summer, offering him hefty six-figure contracts.

Still, Poturalski refused to let money cloud his judgment. If he grabbed the fattest deal and bolted overseas to the Kontinental Hockey League, a circuit comprised mostly of Russian teams, he could effectively be ending his hopes of ever cracking the NHL again. The 27-year-old knew he might always have regrets.

“If you’re chasing your dream and it doesn’t work out, it’s a lot easier to handle than to go over there and maybe not know what’s going on,” said Poturalski, who played two games for the Carolina Hurricanes in 2016-17. “You never know what can happen over there. I think if you are to go to Europe, you have to be fully prepared to be there for the rest of your career.”

Of course, Poturalski acknowledged, the big money offers were enticing. He has earned a base salary of $70,000 in the minors throughout much of his career. But he wasn’t prepared to move 5,000 miles overseas yet.

“Since I was a little kid, I want to play in the NHL,” said Poturalski, who led the AHL in scoring last season with the San Diego Gulls, the Anaheim Ducks’ farm team. “And it’s tough to get called up from St. Petersburg or wherever. Maybe that’s something for later down the road, but I’m not really focused on that right now. It’s hard turning down that kind of money, but it’s not about the money; it’s about fulfilling your dream.”

Poturalski’s one-year contracts with the Ducks the past two seasons guaranteed him $425,000 and were worth $350,000 in the minors, according to capfriendly.com.

“I was … just looking for the best opportunity to play in the NHL,” Poturalski said. “A lot of these teams sign guys to be AHL veterans and play like that and mentor the young guys, which I don’t have a problem doing. But at this point in my career, I want to play in the NHL. I felt that I’ve done a lot at the AHL level to at least get an opportunity at the next level to see if I can play.”

After an injury-riddled 2019-20 season – MCL and wrist problems limited him to just seven points in 17 games – Poturalski showcased his slick form again last year, registering nine goals and 43 points in 44 games. Despite being the AHL’s most prolific scorer, the hapless Ducks never recalled him or elevated him to the taxi squad NHL teams utilized because of the COVID-19 pandemic.

The snubs have helped Poturalski, who went undrafted, develop a chip on his shoulder. Since the start of of 2016-17, his first full season, the 221 points he has compiled rank sixth in the AHL.

“I definitely like to let my game speak for itself,” Poturalski said. “I really want to play in the NHL. It’s been my dream as a kid. That’s what we all play for and what we work for. And every guy can probably say they have a case as to why they could. I feel like I have a strong case for why I could.

“I just want to … keep battling and finally one day break through and prove a lot of people wrong that I can play.”

That long-awaited opportunity could materialize for Poturalski this season. He started training differently this offseason and believes he has improved his speed. While the Hurricanes have established themselves as a heavyweight, they’re short on depth. They’ll likely need help from the Chicago Wolves, their new AHL affiliate.

Wolves coach Ryan Warsofsky was assistant for the Charlotte Checkers during their Calder Cup campaign in 2018-19, when Poturalski set career highs by scoring 23 goals and 70 points in 72 games for the Hurricanes’ old affiliate. Poturalski was at his best during those playoffs, scoring 12 goals and 23 points in 18 contests.

“A guy like me, if I’m playing well, he’ll push for me to get an opportunity,” Poturalski said of Warsofsky. “At this point in my career, that’s all I’m looking for is an opportunity. For me, right now, it’s not about the money or anything else. I just want to get games and see if I can play in the NHL.”