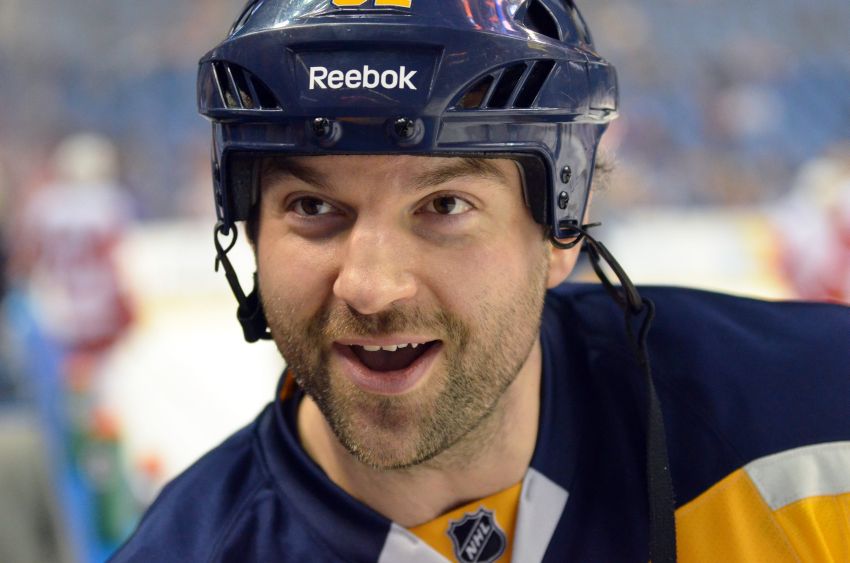 “I guess the people who have that in their mind they don’t really look at me as a hockey player ever,” Scott said Wednesday inside the First Niagara Center. “So it doesn’t really matter what I do. But I like to think I changed peoples’ minds out there. You hope so.”

Scott hopes fighting a career-low four times in a career-high 54 appearances has helped change some perceptions. For the first time in his six-year career, the 31-year-old has played regularly, mostly as a fourth-line winger. He even scored his second NHL goal and subbed at defense, his natural position.

“It’s been really fun,” Scott said after the Sabres prepared for tonight’s road game against the New York Rangers. “I think I’ve played fairly well, pretty consistent, not really any glaring mistakes, kind of bringing something different every game. So it’s been good.”

Of course, a couple of high-profile incidents this season – he ignited a preseason brawl in Toronto getting retribution for a teammate and earned a seven-game suspension for elbowing Boston’s Loui Eriksson in the head Oct. 23 – have hurt Scott’s reputation.

But the 6-foot-8 Scott has only scrapped 33 times in his 234-game career. Sabres center Zenon Konopka once fought 33 times in a season.

“I don’t fight that much,” said Scott, a healthy scratch Tuesday following 25 straight appearances. “I don’t really have that many opportunities. So to call me a goon who fights every game is not true. So I just think I’m big and when I do fight it’s kind of like people notice. It gets a lot of publicity.”

Fighting is down across the league. According to hockeyfights.com, there have been .39 fights a game in the NHL this season. That’s down from .48 last season and the lowest total since the league averaged .38 a game in 2005-06.

Scott isn’t exactly sure. But he thinks fewer fights have given tough guys a greater role.

“I think the guys who are tough guys realize we got to start playing a little more,” he said. “You can see they’re getting more ice time or starting to get a little more points, getting a little regular shift. It’s nice.”

Once they get that, Scott said, enforcers “feel like you don’t need to go out there and have a staged fight every game and just be pigeonholed in that category.”

“People are starting to realize they can play a little more,” he said. “I think that’s why it’s down a little bit.”

Scott said there will always be a role for someone to protect his teammates, although he believes “the days of the heavyweights are numbered.”

“That’s why guys are adapting and that’s why you see I’ve only fought (four) times this year but I’ve played in (almost) every game,” he said. “It’s one of those things where guys adapt and either sink or swim. That’s how it goes.”

Scott, an unrestricted free agent following the season, wants to play a third season with the Sabres.

“I love it here,” he said. “I don’t see myself playing anywhere else, hopefully.”

He added: “I’m not really a squeaky wheel. I just kind of go out there and bury my head and get the work done and wherever the coach puts me just do my best at it. Hopefully, they like what they see and they can extend my career here after this year. That’s the game and that’s the goal.”

The Sabres’ old regime signed Scott. Still, he has become a popular presence in the dressing room. For a rebuilding team, the veteran could be good for a group of youngsters.

“This is a situation where a lot of players on this team are given opportunities maybe they wouldn’t be given anywhere else,” Sabres coach Ted Nolan said. “So how you take advantage of it and what you do with it is totally up to the player. I played John a little bit more. …

“This is the start of building a team for the future and (we’ll) see who fits in, who doesn’t fit in, put people in positions, see how they react and see how they seize opportunities.”

One thought on “Tough guy John Scott happy with larger role, wants to return to Sabres”