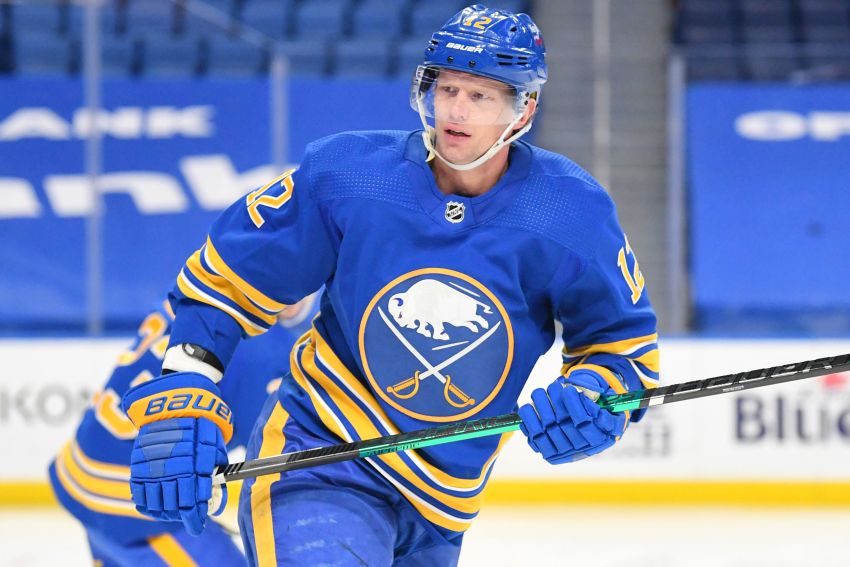 The Buffalo Sabres this afternoon traded veteran center Eric Staal to the Montreal Canadiens in exchange for third- and fifth-round picks in 2021.

The Sabres will retain $1.625 million of Staal’s $3 million salary. Staal, 36, did not practice with the Sabres today in Boston.

“Found out about Staalsy right before practice and just got off the ice to go wish him well,” Okposo said on a Zoom call. “He’s a character guy. He’s a really good person, he’s a good man. He’s had a heck of a career to date and he’s going to continue to play well. So I wish him nothing but the best.”

Staal has struggled this season, compiling three goals, 10 points and a minus-20 rating in 32 games for the hapless Sabres, who have lost 16 straight contests. He has a 23-game goal drought, having last scored Jan. 30.

“It’s been challenging,” Staal said last week of his season. “It hasn’t been good enough. I haven’t been good enough. Clearly, in my mind, I had envisioned things differently coming here and it just hasn’t come to fruition and it hasn’t lived up to those thoughts. I think that’s for sure been challenging, that’s been difficult, but that’s still no excuse. It doesn’t matter.

Staal’s acquisition from the Minnesota Wild on Sept. 16 in exchange for forward Marcus Johansson generated excitement. In Staal, rookie general manager Kevyn Adams brought in one of the NHL’s most decorated players and found a No. 2 center the Sabres sorely needed to play behind Jack Eichel.

But after a solid start, Staal and the Sabres started struggling. Right now, they have the NHL’s worst record, an awful 6-22-4 mark.

Adams knows Staal well, having won the Stanley Cup as teammates with the Carolina Hurricanes in 2006.

“The professionalism Eric displayed during his time with the Sabres was felt by everybody in our organization from top to bottom,” Adams said in a statement. “I know his leadership and demeanor were valued by our players, coaches and staff, and Eric’s impact on our young players is obvious. It was a pleasure to be around Eric again and I wish him and his family all the best.”