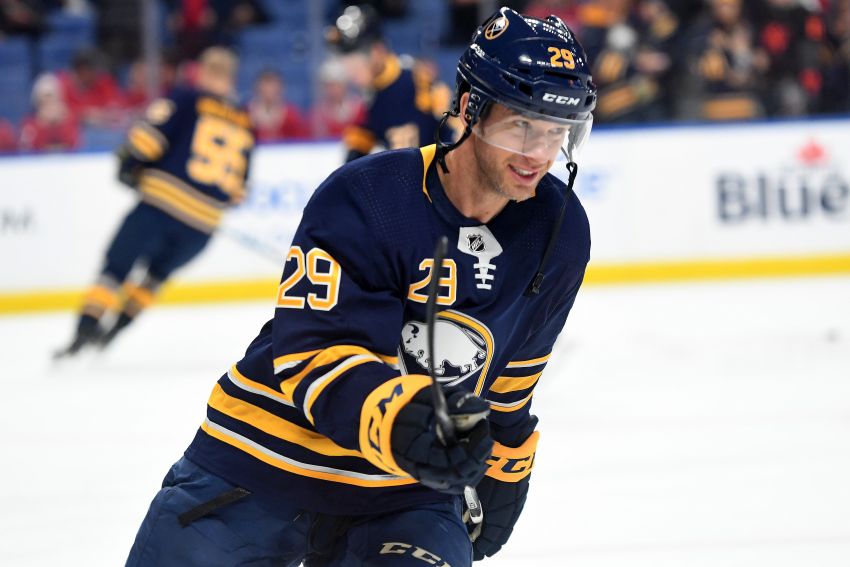 BUFFALO – In the not-so-distant past, the Sabres would’ve wilted in a game like Thursday’s wild 4-3 comeback victory against the Montreal Canadiens.

The upstart Sabres fell behind by one goal three times, including just 77 seconds into the tilt and again early in the third period. Each time, however, they rallied, refusing to deviate from their game plan.

After winger Sam Reinhart tied the game 13:07 into a third period in which the Sabres were dominating the Canadiens, a win felt likely. When Canadiens winger Joel Armia was whistled for tripping late, another triumph felt imminent before the crowd of 16,112 inside KeyBank Center.

“I think everyone in the building kind of sensed it that whole period we were taking over and driving the play,” said Sabres defenseman Jake McCabe, who had two assists.

Clearly, the Sabres kept building off a successful weekend in California. In beating Los Angeles and Anaheim, they showcased the same style, rarely blinking.

“We’re sticking to our game plan,” McCabe said. “Even if we fall down in a game like tonight, 3-2 late, you don’t see a change in us. That’s something that’s been a big difference from past years that I’ve been here. We might stray from our game plan and try to go off individually and not do our brand of hockey.

“Our brand of hockey prevailed tonight.”

Sabres coach Phil Housley said: “I just like the way the guys responded to the adversity and they kept working. … They found a way.”

Okposo said the Sabres bent but did not break. The he quickly corrected himself.

“I don’t even think we bent,” he said. “We just played the same way. That’s all we did. Sometimes you’re going to lose, but if you just keep playing the same way and not trying to take things into your own hands, you are going to have more success. We stuck to the game plan.”

He added: “It felt like we were in control the whole game.”

The Sabres rarely did that last season as they trudged to an awful 31st-place finish.

“Last year, we probably would’ve got in our shell and wouldn’t have had a pushback, a fightback,” said Sabres winger Jason Pominville, who scored twice. “But it’s a different team. The vibe in the room has been great since even before training camp started. The city’s been buzzing, the (Rasmus) Dahlin effect, all the new faces have been nice. It’s nice to have a start.”

A rejuvenated Pominville has buoyed the Sabres’ recent success. At 35, the winger is the team’s oldest player. But right now, just two three appearances away from hitting the 1,000-game milestone, he looks as good as ever.

Pominville scored twice at the net in the second period, answering center Max Domi’s first goal on the power play and Armia’s score.

Pominville, who’s playing on the top line, has compiled three goals and six points in the last three games.

On the winner, Pominville screened Antti Niemi, allowing Okposo’s wrist shot from above the right circle to whistle by the goalie.

“He’s been rewarded,” Housley said of Pominville’s penchant for going to the net. “Both goals, he went to the net hard. That’s one of the things we’ve been focusing on, driving to the net hard and stopping there and paying a price.”

Pominville’s second goal was his 497th point with the Sabres, tying him for 10th in franchise history with Thomas Vanek.

Sabres goalie Carter Hutton made 19 saves. Meanwhile, Niemi was busy all night, stopping 38 shots. In the third period, the Sabres outshot the Canadiens 15-4.