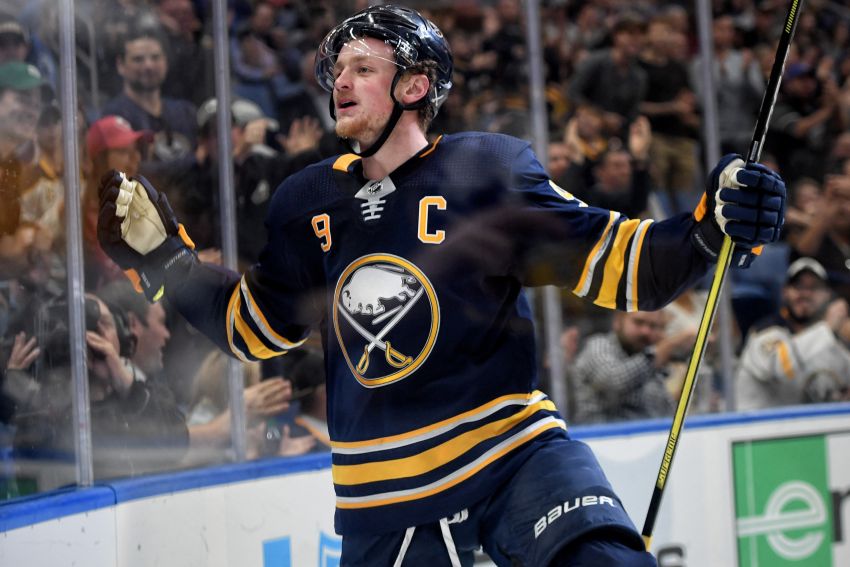 PITTSBURGH – By now, six games into the unlikeliest of winning streaks, the scorching Buffalo Sabres expect to conquer any deficit. Three goals? No problem. A rink they haven’t triumphed in since 2013? Big deal.

“There’s a bit of confidence now because we’ve done it a few times,” Sabres captain Jack Eichel said after his goal 45 seconds into overtime clinched a 5-4 victory over the reeling Penguins inside PPG Paints Arena.

Right now, the Sabres, the NHL’s laughingstock a year ago, are brimming with confidence and showcasing the qualities of a playoff team.

The Sabres have rallied from third-period deficits in three straight tilts – every game of their road trip – and five of their six victories. They’ve won six straight contests for the first time since Dec. 27, 2009 to Jan. 9, 2010.

The Sabres, who hadn’t won in Pittsburgh since April 23, 2013, looked finished after Tanner Pearson put the Penguins up 4-1 5:00 into the second period.

But the Sabres chipped away at a deficit that likely would’ve been insurmountable for them not long ago, getting goals from defensemen Zach Bogosian and Casey Nelson before the second period ended.

After that, the tying goal almost felt inevitable. Rookie center Casey Mittelstadt delivered it 11:12 into the third period, roofing a shot from the left circle past goalie Casey DeSmith.

“It’s a trust and a belief in each other,” Eichel said. “You look at the room, I think the guys are believing the next guy’s going to get the job done and set you up for your shifts. We’re a pretty tight bunch right now for how many new guys have come into this team.

“I think we’re getting really close right now and we’re doing it for each other, and I think that’s the biggest thing. Everyone out there doesn’t want to let the guy next to them down.”

The Sabres kept letting goalie Carter Hutton down early. Despite a slew of big saves, Derick Brassard opened the scoring 8:46 into the game before winger Tage Thompson’s first goal with the Sabres tied it.

Phil Kessel and Jake Guentzel scored before Pearson for the Penguins, who have lost four straight games and eight of the last nine.

Then at the 7:48 mark of the second period, Hutton stymied Kessel’s point-blank one-timer with his right skate, keeping the game at 4-1.

“I’m able to get across enough,” said Hutton, who made 36 saves. “I think Kessel doesn’t really get it where he wants it and I’m just able to get my toe on it. At that time, I think just my competitive nature comes out. …

“It’s a mental battle at that point, right? It’s 4-1 and things aren’t going my way. I feel like I’ve played a really good game. You give up four goals, it’s obviously frustrating, so you just try to mentally stay with it and battle and battle.

“And again, this team just proves (to) everybody how resilient we are. At that point, I think that was when they needed me.”

If Kessel had buried it, a four-goal deficit might’ve been too much to overcome.

“Whether it’s Hutts or (backup Linus Ullmark), they’ve both been playing really well, and anytime you can lean on that you’re a little more comfortable out there and you’re not scared of making a mistake or something like that,” Mittelstadt said.

What changed after the Sabres’ awful start?

“We played faster,” Housley said. “We got the puck up quicker. We weren’t bringing it back and retreating. We were on our toes and moving forward, playing that north brand of hockey.”

Eichel zoomed north on a two-on-one in overtime with winger Conor Sheary and scored his first goal in nine games, beating DeSmith under the arm.

Eichel has compiled a team-high 24 points in 21 games. Still, it was just his second goal in 18 contests and fifth overall.

“You start gripping your stick and thinking about it,” Eichel acknowledged. “I think you guys (the media) have been on me a little bit more than I’ve been on myself, the whole shooting percentage or whatever it is.

“Our team’s winning, so I’m not going to complain. I thought that was a heck of a road trip against three really good hockey teams.”

Sabres defenseman Marco Scandella left the contest with a lower-body injury after blocking Evgeni Malkin’s shot with his skate. Housley had no update.