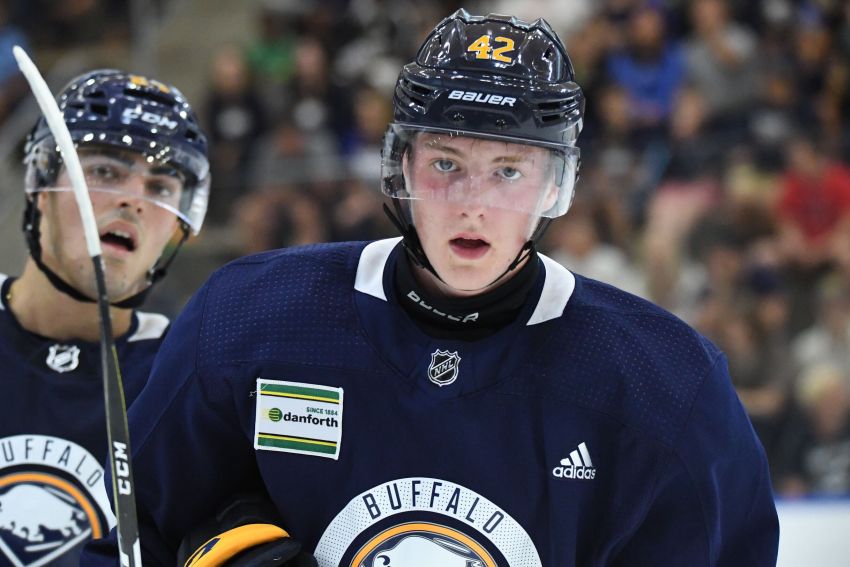 The Sabres drafted Matej Pekar in the fourth round. ©2018, Micheline Veluvolu

BUFFALO – Sabres prospect Matej Pekar said he was “still on the edge,” unsure whether he should join the Barrie Colts when he recently visited the Ontario Hockey League club.

When the Sabres drafted Pekar in the fourth round, 94th overall on June 23, he said he planned to play NCAA hockey this season at Miami University in Ohio. Then on June 28, the Colts, a junior team coached by Hall of Fame center Dale Hawerchuk, selected Pekar 108th in the Canadian Hockey League Import Draft.

Still, in July, Pekar said he would return to the United States Hockey League’s Muskegon Lumberjacks, according to accesshockeymi.com. The Czech won the junior league’s top rookie honors in 2017-18, compiling 14 goals and 54 points in 56 games.

But Pekar’s four-day visit to Barrie helped convince him the OHL would be a better career path.

“I just kind of realized that I want to focus on hockey, I want to face the best players I can and get pushed right now … as hard as I can,” he said. “That way I think should help me develop into hopefully an NHL player soon.”

While the OHL and USHL are both junior leagues, by joining the Colts, Pekar forfeited his NCAA eligibility.

“It was difficult,” he said of his decision. “I was on the edge. I talked to my parents. It was nice that my parents let me decide it by myself. I didn’t really have any pressure from my parents.

“They obviously want me to keep getting education. I kind of explained to them this is what I want to do. They said they’d support me either way.”

“I want to play as many games as I can against the best possible players,” Pekar said. “The games are going to push me and push me to my maximum.”

Pekar believes playing for Hawerchuk, who spent five seasons piling up points for the Sabres, will be special.

Joining Barrie allows Pekar to participate in rookie camp and the Prospects Challenge tournament, which the Sabres close this afternoon against the Pittsburgh Penguins.