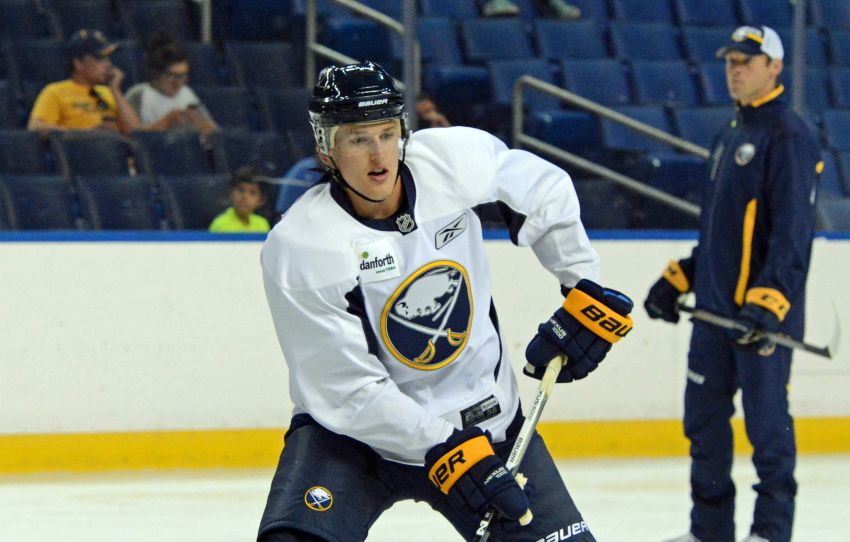 Hudson Fasching will be a junior next season. ©2015, Dan Hickling, Olean Times Herald

But the American, who scored 14 goals as a freshman during the University of Minnesota’s run to the 2014 national championship game, recently announced he will return to the Gophers for his junior season.

“It was kind of about being an experienced player,” Fasching said Monday inside the First Niagara Center.

The opportunity to develop leadership skills as a veteran enticed him back to college.

“Growing up, I was always the youngest kid on the team,” he said. “I kind of fit into that role. I never really grew to understand leadership and how to really fulfill that. So I think that for me this year’s kind of about growing not only as a player, but also as kind of a person and as a leader.”

Fasching, part of the Brayden McNabb trade with Los Angeles at the 2014 deadline, is one of the country’s top teenage prospects. The Minnesota native has represented Team USA at the last two world junior championships with Sabres prospect Jack Eichel, the second overall pick last month.

Eichel’s many talents have wowed Fasching.

“He does everything well,” Fasching said. “There’s not one thing you can say, ‘You know, he has a weakness.’ I think that’s what makes him so special.”

“He’s still the same kid,” Fasching said. “Obviously, he’s had to grow up. He’s obviously had a lot of attention. I think because of that he’s matured a little bit more quickly.”

He added: “He’s a little bit of a goofball sometimes. He messes around. But he means well, and when it comes down to it, he works hard.”