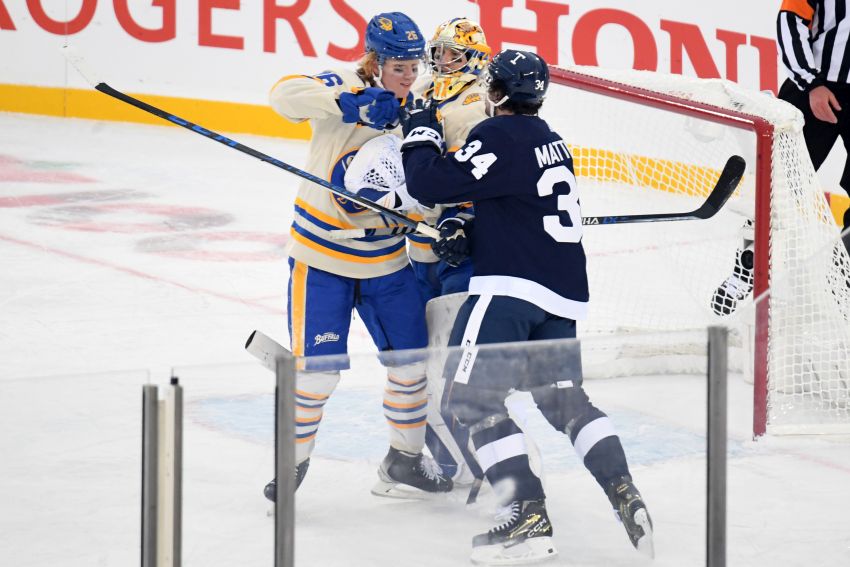 HAMILTON, Ont. – After absorbing a vicious cross-check in the neck from Auston Matthews, Buffalo Sabres defenseman Rasmus Dahlin did not need much time to cool off.

After the Leafs fell behind, they lost their cool in the waning minutes, and Matthews and Dahlin shoved each other near the net. When Matthews hit Dahlin, Sabres goalie Craig Anderson stepped in to separate them.

Matthews has a hearing today with the NHL Department of Player Safety.

Dahlin brushed off Matthews’ actions, chalking them up to being part of the game.

“It’s hockey,” he said. “You know, things happen out there, it goes fast. It was intense. So I’m fine. I’m just happy we won. I’m not too worried about that stuff.”

Matthews said he hadn’t seen a replay of the hit.

“It’s battling in front of the net,” he said. “I felt like I kind of rode up his shoulder and his shoulder pad rolled up a little bit. That’s hockey, it’s competitive out there, guys are physical and trying to compete.”

As few minutes later, Toronto’s Michael Bunting hit Sabres center Dylan Cozens after Cozens thumped Matthews. Cozens had to be restrained from going after Bunting during a melee.

“I just want to talk about Cuzzy, what he did,” Dahlin said. “You can really see we’re brothers in the locker room. We care about each other. We have something really good going on. Everyone wants to win together and it’s fun to be a part of, for sure.”

Sabres coach Don Granato said: “Cozens was competitive there at the end. There was nothing out of bounds there. We stayed within ourselves how we should have and I’m proud of our guys for that.”

Dahlin and Matthews getting into it, Anderson playing peacekeeper #LetsGoBuffalo #LeafsForever pic.twitter.com/ffyB9jEo2y

It has become tradition for teams participating in outdoor games to pick a theme and arrive at the venue in full costume.

The Sabres went all out, stepping off the bus and walking into Tim Hortons field in full Flint Tropics uniforms, just like Will Ferrell sported in the 2008 basketball movie Semi-Pro.

Whose idea was it? Apparently, after another team used an idea the Sabres liked, center Cody Eakin came up with dressing as basketball players.

“We were going to be lumberjacks or something or cowboys, I have no idea,” said Sabres winger Vinnie Hinostroza, who scored two goals and added an assist. But they did that so we had to change, and there was a couple skeptical ideas going around. And somebody brought up Semi-Pro, I think it might’ve been Eaks, yeah.

“Everyone just agreed and thought it was a good idea.”

Hinostroza said the Sabres enjoyed a fun bus ride over from the hotel in their costumes.

“You want to play well when you kind of come in looking like idiots,” he said. “We answered the bell, it was a great day.”

The Leafs dressed up like steel workers, a tribute to Hamilton.

Notes: Even with defenseman Mark Pysyk back in the lineup for the injured Casey Fitzgerald, Dahlin kept wearing an ‘A’ as an alternate captain. … Sabres winger Rasmus Asplund, who left Thursday’s 3-1 after blocking a shot, played Sunday. … Sabres center Mark Jankowski, a Hamilton native, skated in the pregame warm-up but was scratched. … The temperature was 28.5 degrees at the opening faceoff. … The wind forced the teams to change ends halfway through the third period.