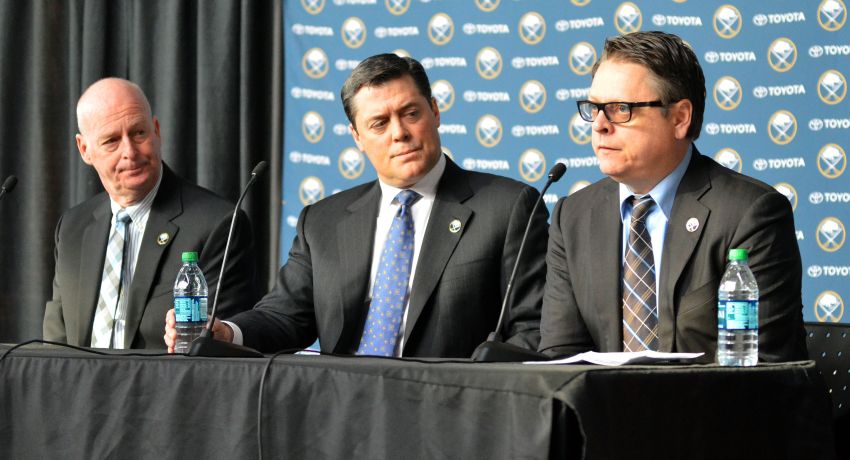 BUFFALO – The Sabres appointed Tim Murray their new general manager today, but not before making a surprise announcement.

Craig Patrick, a Hockey Hall of Famer and two-time Stanley Cup champion as Pittsburgh’s GM, has joined the team as a special assistant and advisor to the hockey department.

Here are some highlights from today’s new conference.

“You build a team through the draft. Good drafting allows you to trade well, and then you use free agency to put you over the top.”

“The market dictates (trades). I can’t go out right now and tell you I’m going to trade all the pending UFAs if there’s no market to trade them. If there’s a market and it makes sense, this team’s in last place right now, everybody can be traded. It has to make sense. You don’t just make trades for me to come in here and show you guys that I’m active and I think I’m smart. That’s not the way to go about it. I think our phones will ring off the hook here going forward on those guys.”

“I know Ted from arenas. I’ve seen him in arenas watching games, whether he was watching his kid or scouting for Sault. Ste. Marie. I’ve known him for a long time on a casual basis. He’s the coach of this team. I got the job last night. I’m going to come in here and try to establish a relationship with Ted, his coaching staff, get to know them. But he’s the coach right now. Whatever happens going forward will determine everything else. But there’s no preconceived notions.”

On getting his first job:

On the front office:

“It’s kind of the office of general manager, but Tim’s going to wear the hat. He’s earned it. He’s spent 20, 21 years on the road. He’s done every job to get to this points. His last job was as an assistant general manager, and he’s had some success everywhere he’s been, and he’s going to have success here in Buffalo.”

“I’ve rebuilt a lot of teams. I’m anxious to get started.”