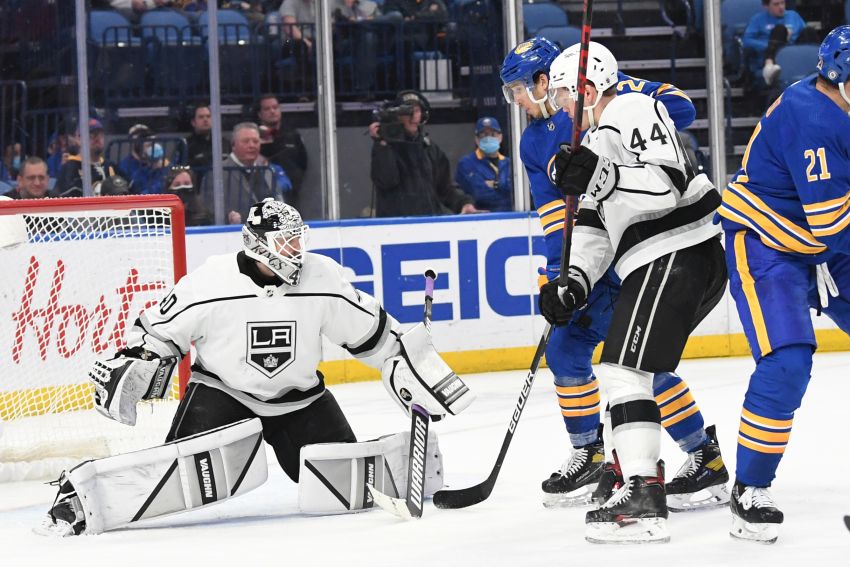 BUFFALO – For one game at least, the Sabres got a small taste of playoff hockey, playing a lock-it-down, grind-it-out affair against the Los Angeles Kings.

The Kings, one of the NHL’s biggest surprises this season, stifled the Sabres all afternoon, limiting scoring chances and showcasing rigid structure. When the visitors grabbed a 1-0 lead late in the second period, they were content with sitting on it.

“They know if we keep it 1-0, we win, and that’s as focused a shutdown effort as you’ll see,” Sabres coach Don Granato said following the Sunday’s 3-0 loss. “It was much like a playoff game. They needed the two points because they’re in a playoff race and that’s what they were playing for. They weren’t playing for anything else but how do we get this two points and slow this team down? They did a heck of a job in that and that’s something we can take from this.

“This is what it looks like in the playoffs. When a team gets up, they shut it down. We were challenged with that and we’ve got to learn from that.”

By their standards, the Sabres had been on a roll, winning two straight games and scoring 10 goals. They haven’t won three consecutive contests since starting the season 3-0.

Andreas Athanasiou opened the scoring 16:55 into the second period, beating Sabres goalie Dustin Tokarski under the crossbar on a two-on-one after defenseman Casey Fitzgerald deflected the puck.

Despite getting shut out for the sixth time this season, Granato believes the experience of playing a heavy team will be beneficial for the Sabres.

“The game, we struggled with some simple things under the pressure, the moment,” he said. “That’s why I say the video is good because you can get to that and say, ‘OK, we can learn from this, this is much simpler than maybe we perceived and felt.’”

The Sabres’ home stand offers them a chance to play some playoff-bound teams that possess different styles. Monday’s opponent, the Florida Panthers, plays a fast, wide-open game. On Friday, the Sabres beat the Minnesota Wild, a team that blends different elements of the Kings and Panthers.

Winger Kyle Okposo wants the Sabres to impose their own identity on their opponent.

“If you try to play somebody else’s game, more often than not you’re going to lose, unless you’re one of the two elite teams in the league.”

As part of the “Kids Day” festivities at KeyBank Center, children took over some duties from adults, including Okposo’s 5-year-old son, Odin, and his 8-year-old daughter, Ellie.

Odin stood next to his father and briefly addressed the Sabres in the dressing room prior to the game, telling them, “Try your best to win and try to get a ‘W’ and play with your heart.”

Then Odin, who wore a suit for the occasion, read the starting lineup, which included his father.

During the first intermission, the Sabres aired an interview Ellie did with her father.

Okposo sounded emotional – “That was pretty special,” he said – as he recalled the afternoon with his children.

“I was a pretty proud dad to be able to be in that setting as an 8- and a 5-year-old and be confident enough to speak how they did, and Odi coming into the locker room there was a special moment for me,” he said. “I’m going to remember that for the rest of my life.”

“Try to get a W and play with your heart.”

Eakin was questionable for the game after suffering an undisclosed injury in Friday’s 5-4 win and missing Saturday’s practice.

Notes: The crowd of 10,755 fans was the Sabres’ second-largest this season. … The Sabres drafted Petersen in 2013 but he refused to sign with them and became a free agent in 2017. … The Sabres have allowed 15 empty-net goals this season. … Sabres defenseman Henri Jokiharju (lower body) missed his fifth straight game. They also scratched center Mark Jankowski (healthy) for the fifth straight contest.

2 thoughts on “Sabres experience ‘playoff hockey’ in loss to Kings”