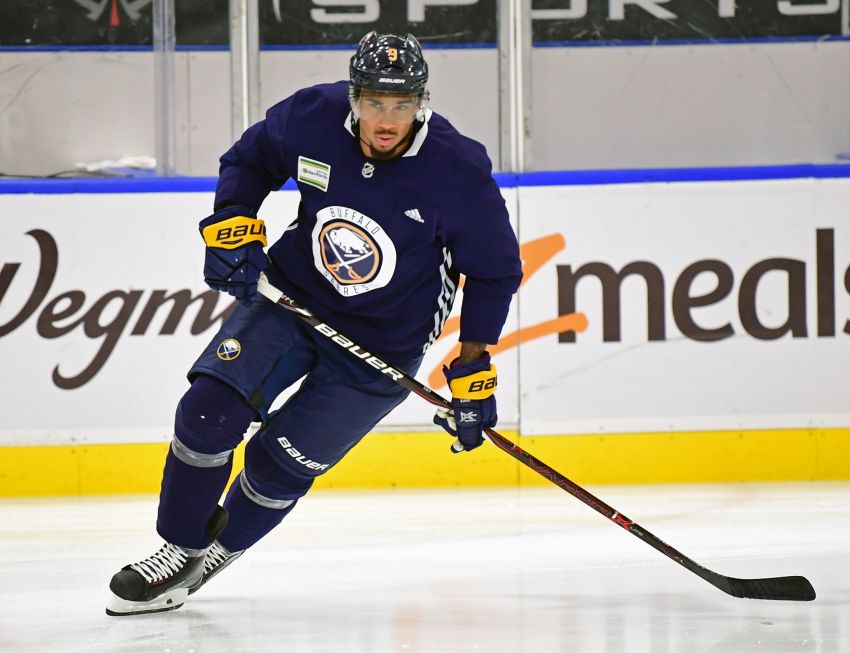 BUFFALO – Right now, Sabres winger Evander Kane is happy, healthy and one of the NHL’s most dynamic players.

He has already compiled nine goals and 15 points in the opening 15 games. Going back to last year, he has scored 37 times in his last 73 appearances, the league’s fourth-highest total in that span. His 30 even-strength goals rank second in that time.

Kane, who scored twice Tuesday, said the reason for his early success is simple.

“First time in four years I’ve played the first 15 games, that’s why,” he said Thursday after the Sabres prepared for tonight’s home tilt against the Florida Panthers. “I’ve been hurt every start of the season for the last four years.”

Nine seasons into an enigmatic career, Kane, 26, looks like the star many envisioned he would become when the Atlanta Thrashers drafted him fourth overall in 2009.

But how much longer will Kane be with the Sabres? He’s in the final season of the six-year, $31.5 million contract he signed with the Winnipeg Jets.

Given his recent exploits, Kane will likely earn a hefty raise – perhaps upwards of $7 million a season – as an unrestricted free agent. To fit Kane under their 2017-18 salary cap, the Sabres need to unload a huge contract.

So it’s believed the struggling Sabres will try to trade Kane at some point. Since the Colorado Avalanche dealt center Matt Duchene to the Ottawa Senators in a blockbuster three-way deal Sunday, Kane could be the best player available.

What does Kane make of his uncertain future?

“I don’t really think about that,” he said inside KeyBank Center. “For some reason, it doesn’t bother me at all, whether you believe me or not, it just doesn’t. I’m under contract, so I’m pretty comfortable right now and I’m really happy with where I’m at here in Buffalo and love the guys in the room and love what we’re trying to build here.”

Kane believes it’s too early to talk about staying in Buffalo on a long-term deal.

Barely a year ago, Kane possessed little trade value. In 2015-16, the Sabres benched him after he partied in Toronto and overslept practice. Kane was arrested in June 2016 following an incident at a local bar. Trespassing and harassment charges were later dropped.

On the ice, he mustered 20 goals in his first season with the Sabres.

Kane, however, has stayed out of trouble since then and quickly earned the respect of new Sabres coach Phil Housley, who believes the power forward leads by example.

“He’s just a true competitor,” Housley said of what he’s learned about Kane. “He really approaches the game the right way. He can score goals, too. He’s a gritty guy that goes into the areas a lot of people don’t go to. I really like what he brings, the physical element to his game.”

He added: “He’s been one of our most consistent guys up front.”

Kane has also been focused on becoming one of the NHL’s best talents.

“A lot of things have gone on – on and off the ice – over the past couple years that last year I wanted to put behind me and wanted to prove I’m an elite player in this league,” Kane said. “You can’t just do it for one year, you got to do it year after year. I just wanted to have a good start. Hopefully, I have some good luck on the injury side.”

Those injuries stymied Kane over the years. Last season, he went down opening night – “I go 40 mph into the boards, break four ribs,” he said – and struggled after returning too early. When he finally scored his first goal in his 13th game, he quickly morphed into one of the league’s best forwards, scoring 28 times in his final 58 contests.

Under Housley, he has reached a new level.

“Phil’s an honest guy,” Kane said. “He wants to win. Right now, we’re building toward doing that consistently, and I think it’s been a work in progress so far. I think we all see as a group in here and as a coaching staff potential, and we’re kind of on the cusp of breaking through that barrier.”