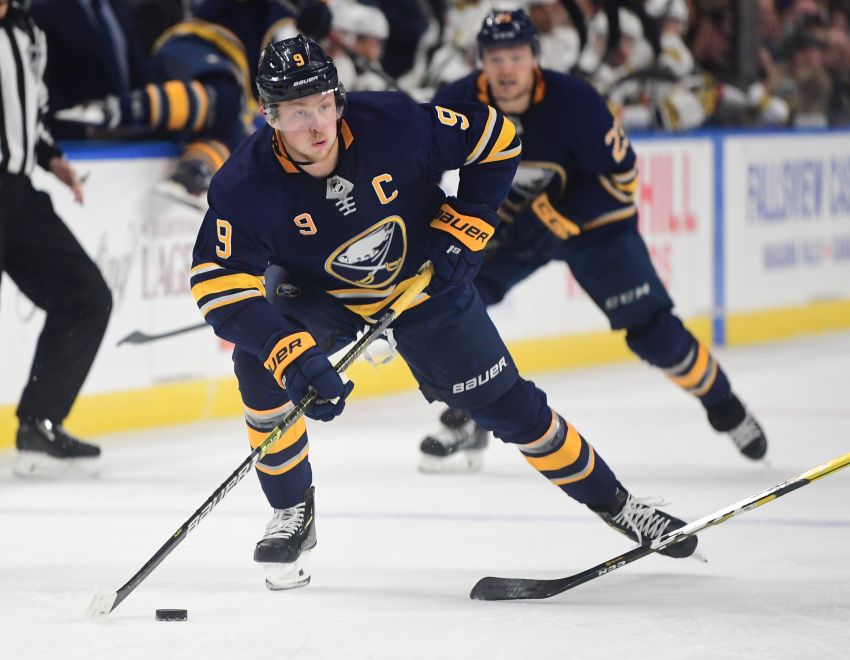 BUFFALO – Depth means coach Phil Housley can utilize his so-called fourth line for critical defensive zone faceoffs. It means the Sabres can replace former center Ryan O’Reilly’s minutes by committee. It means it can often be hard to distinguish between the first and fourth trios.

Right now, for the first time in years, the 2-1 Sabres possess depth up front and the ability to roll four lines.

“We’ve been rolling them pretty good,” center Evan Rodrigues said Wednesday after the Sabres prepared for tonight’s home tilt against the Colorado Avalanche. “Every line’s been contributing. I think it’s had some success early on.”

Housley said he likes that the Sabres can “push the pace and keep the tempo up.”

“That’s what we want to do, we want to be able to roll four lines,” he said.

Depth has helped the Sabres, who are over .500 for the first time since January 2013, get off to their best start in years. In fact, a win tonight will give them their first three-game winning streak since last Jan. 22 to 25.

That was the only time they put together three straight wins last season.

Through three games, it can be argued the line Rodrigues pivots between wingers Zemgus Girgensons and Jason Pominville has been the Sabres’ best.

On paper, it’s their fourth combination. But on the ice, Housley has been unafraid to throw the line out in any situation. The players have rewarded their coach, outplaying a line featuring first-round picks Casey Mittelstadt and Tage Thompson.

In the season opener, Rodrigues, Girgensons and Pominville created most of the Sabres’ offense early. On Saturday, Housley replaced Girgensons with newcomer Remi Elie. But on Monday afternoon, the trio was reunited and produced Pominville’s 278th NHL goal.

“You need … every line going, every line’s in the game, keep your shifts short and roll over every line,” Pominville said. “A lot of the good teams are doing it and they’ve had success doing it. It’s a long season. You can’t over overplay some of your other guys.”

Sabres captain Jack Eichel was on the ice too long – a career-high 25 minutes, 45 seconds – in Saturday’s 3-1 win against the New York Rangers.

Don’t expect the slick center to approach that mark again soon. He skated 19:11 in Monday’s 4-2 win against the Vegas Golden Knights inside KeyBank Center.

“A little bit had to do with special teams,” Housley said of Eichel’s ice time Saturday. “He would admit to it he’s out there a little bit too long. He’s got to monitor and manage his shift length.

“We’re going to look after that a little bit better. But sometimes you’re in the zone for a minute and a half. You have pressure, those things always arise. Certainly, we don’t want him playing that much.”

Eichel said: “The shorter your shift, the more fresh you are. I’m also on the ice to perform, so when I go over the bench I got to help our team do something.”

Housley, of course, still plans to lean on Eichel, who has been centering Conor Sheary and Sam Reinhart.

So far, Eichel’s ice time is up (22:09 compared to 20:09 last season). While that average will likely go down, he should absorb some of the nearly 21 minutes O’Reilly skated each contest a year ago.

The Sabres have also relied on veteran Patrik Berglund to fill the void left by trading O’Reilly. Berglund, 30, has been centering Jeff Skinner and Kyle Okposo on the second line.

“It’s kind of going to be by committee,” said Rodrigues, who skated 17:04 on Monday, the fourth-highest total of his career. “The guys that are going I’m sure will be relied upon to play more minutes. I think that just speaks to our depth this year on our team.

“We can go to anyone in the lineup and any one of the four lines and know that we’ll all play the right way, we’ll all do the little things.”

One thought on “Sabres’ depth has buoyed strong start”