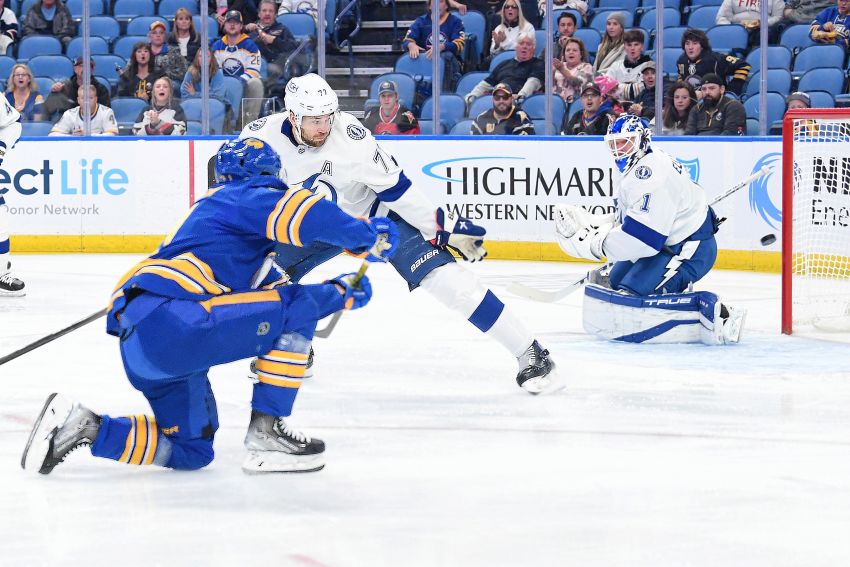 BUFFALO – In previous seasons, a message like Don Granato had for the Sabres during Monday’s second intermission might’ve been quickly forgotten or even dismissed.

But part of what makes this current group so different – besides the fact it has actually been, you know, winning – is it wants to hear from Granato and his staff. The players want to be challenged.

“Sometimes you’d love to give message and you can’t give it to them because they can’t – the saying in the famous movie, they can’t handle it,” Granato said after the Sabres beat the Tampa Bay Lightning 5-1, ending a seven-game losing steak against their Atlantic Division rival.

Right now, it appears the Sabres a few good men who want the truth.

When Granato addressed his players, the Sabres held a 2-1 lead over the two-time defending Stanley Cup champions. Still, they had mustered just three shots during the second period and went nearly 14 minutes without registering a single one.

They were showing the Lightning too much respect, and Granato let them know it.

“I had a message for them,” Granato said. “I didn’t like what was transpiring and felt we needed to respond. You certainly have to respect what they have over there. But there’s something to giving them too much respect, and that can’t happen. Can’t happen.”

So the Sabres digested the information and buried the Lightning, getting an early goal from winger Vinnie Hinostroza before defenseman Robert Hagg and winger Victor Olofsson, who also opened the scoring, added empty-netters.

“Donny came in after the second and kind of just told us, like, (you’re) kind of just letting them dictate what’s going to happen in the game,” Hinostroza said after scoring his first goal this season. “We got to go back, we got to hit them back, we got to get right in their face and make it hard for them, because the first period and half, two periods were really easy for them.”

Sabres winger Drake Caggiula, whose breakaway goal broke the 1-1 tie 19:22 into the second period, compared the first 40 minutes to a big brother beating up his little brother.

“Kind of just push back, push back,” he said after scoring his first goal. “We came back flying in the third and pushed back. That’s the way we need to play. We got to play in your face. We got to be the ones dictating the pace.”

Incredibly, the Sabres, a team picked by many to finish dead last, have roared out of the gate, beginning the season 4-1-1. They’re four points ahead of Tampa Bay, which hasn’t held a lead in regulation all season.

“We don’t really pay attention to what people say,” Hinostroza said. “From Day One, I mean, we know the group we have in here. All hardworking guys, all guys that want to be better than where they’re at in their career. No one’s been satisfied with what they’ve done. I think that goes for the coaches, GM, owners, down to every player on our team.

“So when you have a group like that that really wants to win and work hard for each other, you can accomplish a lot.”

Sabres goalie Craig Anderson said: “That’s the reigning Stanley Cup champs. That’s a great hockey team over there. … This is a tough league to play in, it’s a tough league to get wins in. Kudos to our guys for putting in the work tonight.”

Stellar goaltending has also helped the Sabres roar out of the gate. Anderson held them in the game early and stopped 35 shots overall.

“When you have a guy like that, both those guys behind you, it just gives you so much confidence,” Hinostroza said. “You’re not afraid to make plays. If you make a mistake, it’s not going to end up in the back of your net most of the time.”

The Sabres, who played four of their first five contests at home, open a four-game road trip Thursday against the Anaheim Ducks. On Monday, an engaged crowd of 7,417 fans often sounded much louder.

Home ice has clearly ignited the Sabres early. So has their new leadership group.

“We had to change the belief system,” Granato said. “That’s the No. 1 thing we had to do. We still have to do it. I mean, it’s still not – we don’t have any long body of work on this. So it’s still a major work in progress.

“But tonight, obviously, is one more night of hopeful reassurance that you can do things and the core guys, the core older guys really, really are key in that.”