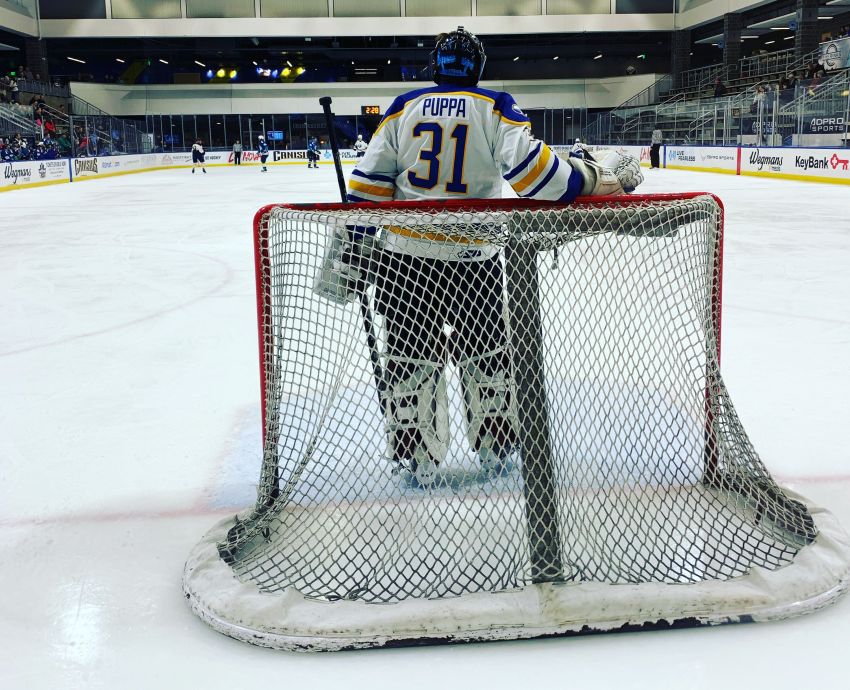 The small pads prevented Puppa from butterflying, the technique he utilized throughout his successful 15-year NHL career. He said the size 13 skates felt “like boats.” The long stick kept him from getting into the proper crouch.

Just getting on the ice again for a Sabres Alumni game held major significance. The former NHL All-Star hadn’t tended goal in 18 years.

In 2000, a bad back that still wreaks havoc forced a battered Puppa to retire from the Tampa Bay Lightning. He has experienced pain from his injuries – he also feels numbness in the arm he broke in 1989 – his entire post-hockey life.

Puppa’s wife, Meg, said she and their three children would regularly “roll” him into the back of the family’s Chevy Suburban and drive him to the chiropractor when his back gave out.

“So they lived the pain of his injuries and remember that,” said Meg Puppa, who grew up on Grand Island and met her husband while he played for the Sabres.

But their kids – they have two daughters, Ali and Isabel, and a son, Cory – don’t remember him playing. So Puppa’s outing had extra special meaning.

Earlier this year, Meg Puppa asked Daren if he missed hockey. Around the same time, he decided he would start helping out her brother, Michael Lee, a former high school and Junior A goalie, with the Elevation Goaltending Academy, which he started last year in Raleigh.

Daren Puppa is going to analyze video of students weekly and occasionally travel to North Carolina for more hands-on work.

His words shocked her.

But Daren Puppa, who was invited to Buffalo for some alumni events, was hellbent on doing it. He started rollerblading around their neighborhood in Tampa, ramping up his workouts and “training like he used to,” according to Meg Puppa.

Isabel Puppa, a graduate student at the University of Calgary, said her mother casually relayed her father’s plans to get back on the ice.

She added: “My dad didn’t think it was a big deal.”

But it was big deal for Puppa’s family.

When Isabel Puppa found out the rest of her family would be flying to Buffalo to watch him, she said, “I can’t miss this.”

She knows her father endures pain and tries to keep it to himself.

“It was kind of painful to watch him,” she said of everyday life growing up. “He doesn’t complain and he doesn’t really show it. … Knowing that he’s in pain and just seeing him go on and do everything anyway has always been really inspiring to me and hard to see.”

Sometimes Isabel Puppa, who grew up playing sports, would accompany her father to the chiropractor for her own treatment.

“It would take him like 30 minutes to get adjusted, whereas for me, it takes like five minutes,” she said.

Daren Puppa, who now works in real estate, called his return to the ice a “last-minute thing.” Since he hadn’t played for so long, other than having an old mask, he needed equipment. So he asked around.

“Get me some equipment, I’m going!” Puppa said.

A friend with the Colorado Avalanche sent some items back with the Sabres when they visited last month. The Sabres and Lightning also helped.

Puppa, a two-time Vezina Trophy finalist, wondered if he would hold up in “game” action. When he told people he was going to play again, they all told him, “Don’t get hurt!”

“First thing out of everybody’s mouth, like over and over and over,” he said. “I played in the NHL. I’m ready to play hopefully.”

Despite having no warm-up time, Puppa survived the 40-minute game, backstopping the Sabres to a win over the Esquires All-Attorney team in front of about 10 or 15 family members and friends. He only suffered a slightly swollen knee.

While Puppa couldn’t move like he used to, he still possessed enough agility to showcase the two-pad stack.

“That’s the only thing I had going,” joked Puppa, who plans to keep playing and is working on acquiring the proper-sized equipment.

Puppa said his family took pictures, video and ate up his comeback.

“They really enjoyed the fact that they go to see me, because I looked like a goalie,” he said. “Not quite the same movement.”

Isabel Puppa said she never thought she would see her father return to the ice.

“I knew how much pain (he experienced) and how injured he was,” she said. “It was really special, because he always came to one of my sports games growing up. He was always there. So it just felt really special to be able to actually see him play.”

The Sabres, who had Monday off, host the Nashville Predators tonight at KeyBank Center.