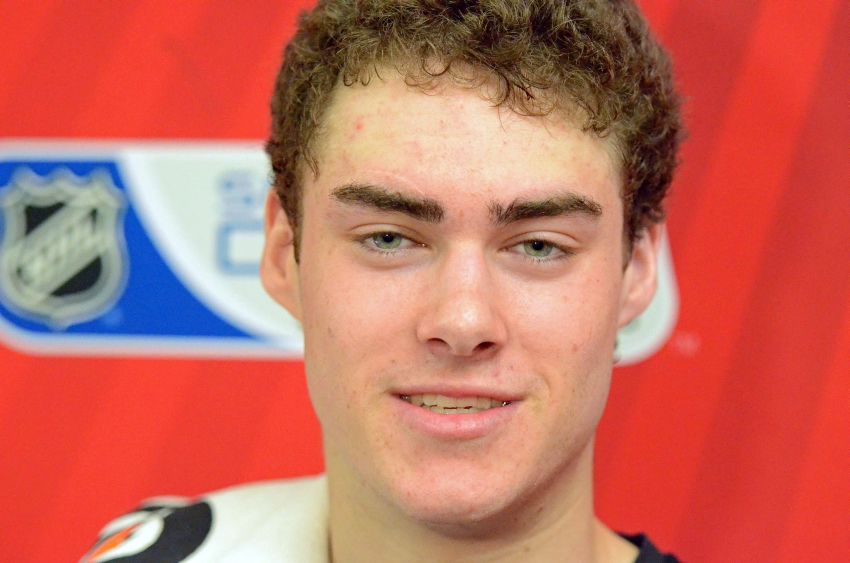 Luc Snuggerud will play for the University of Nebraska-Omaha next season. ©2014, Dan Hickling, Olean Times Herald

High school hockey is part of the fabric of Minnesota life. The championship is played before 19,000 fans in the Xcel Energy Center, an NHL rink that prominently displays the jerseys of all the state’s high school teams.

“That’s the whole goal, going to the state tournament and playing in front of 19,000 fans,” Snuggerud said at the combine inside the Toronto International Centre. “There’s really nothing like it. I got to experience it this year for the first time. It’s a huge adrenaline rush just going out there and seeing 19,000 people seeing you play hockey.”

What separates Minnesota from other places?

“You grew up with your buddies playing hockey all the way up,” Snuggerud said. “So you really have a good bond with them. So you’re going out there playing with each other, too, as much as yourself.”

Snuggerud is close with his uncle, who played 215 games with the Sabres from 1989-1992. A team Dave coached in the summer had five players drafted last year. Two more could be picked next week in Philadelphia, including Luc, the 42nd rated prospect among North American skaters.

“He knows what it takes to play in the NHL and be an NHL player,” said Luc Snuggerud, who will play at the University of Nebraska-Omaha next season.

Snuggerud, 6-feet and 180 pounds, calls himself “a really strong-skating defenseman.”

“I can see the ice well,” he said. “I like jumping up in the play and creating some offense and making good passes to teammates and stuff like that. Obviously, I’m a high-compete, hardworking guy. So those are two things I really pride myself in.”