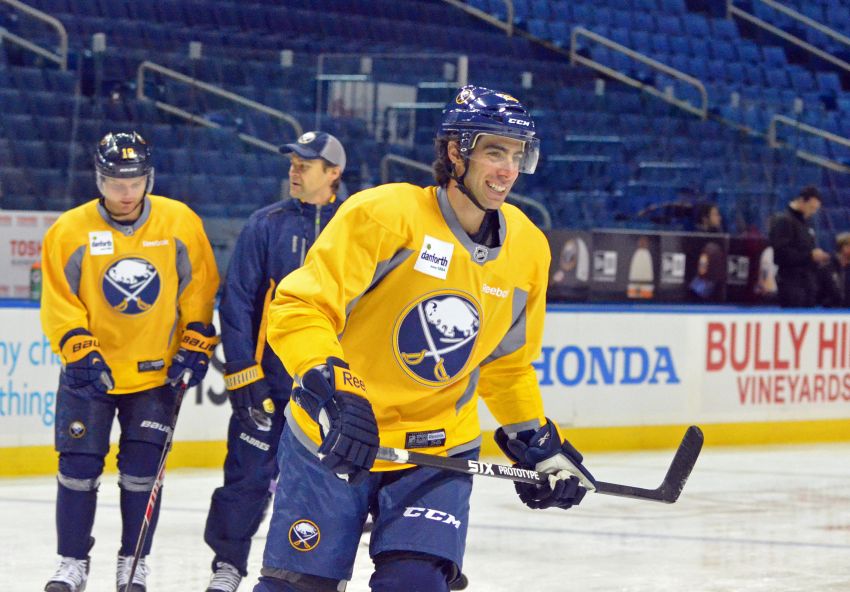 “I used to love coming to Bills games,” Moulson said this morning inside the First Niagara Center, less than a day after being acquired with two high draft picks from the New York Islanders for co-captain Thomas Vanek. “So it’s a great city. Who knows, it could be for a long time. We’ll see what they have in store.”

Like Vanek, Moulson’s an unrestricted free agent following the season. Given the Sabres’ sorry state, the rebuilding club might just dish the 29-year-old again in a few months.

Still, Moulson said it’s “exciting” to be part of the young group.

Ironically, Moulson, a three-time 30-goal scorer, will wear Vanek’s old No. 26 and skate in his spot on the left wing beside center Cody Hodgson tonight against coach Lindy Ruff and the Dallas Stars.

“I’m sure I’ll be around the net as usual,” Moulson said. “I don’t venture too far from there.”

Moulson joked he hopes Ruff’s return to Buffalo overshadows his night. He took a 4:30 a.m. ride to the airport and arrived in time to skate with his new teammates this morning. He was on the couch Sunday night when he learned of the trade, something he called “shocking.”

The Austrian called the trade “a bit of a shock,” although he wasn’t surprised and he “knew it was going to happen sooner or later.”

“We traded pretty much every veteran,” Vanek said. “The message was clear they were going for draft picks and youth.”