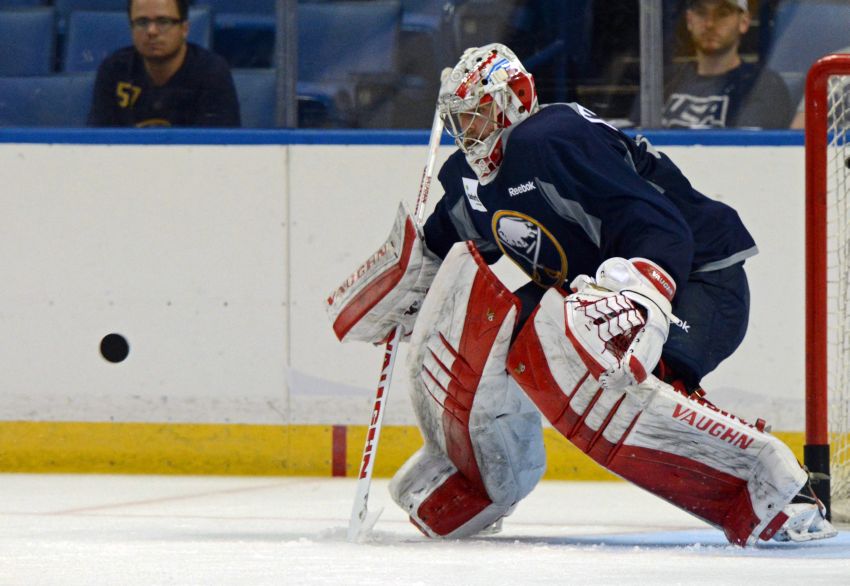 BUFFALO – Some of hockey’s biggest young names switched teams in the Sabres’ blockbuster seven-player trade with the Winnipeg Jets in February.

Lost in the hubbub was a college goalie the Jets quietly sent the Sabres in the Feb. 11 deal.

Remember this name: Jason Kasdorf, a 23-year-old Winnipeg native about to begin his senior season at R.P.I.

Kasdorf, a 2011 sixth-round pick by the Jets, was the best goalie during Friday’s development camp scrimmage, stopping every shot he faced in about 30 minutes of work.

He ended his night with a quick glove save, earning some loud cheers from the 17,115 fans inside the First Niagara Center as he skated off.

The Sabres passed on drafting a goalie last month partly because general manager Tim Murray wants the organization’s young ones to grow and separate themselves.

The 6-foot-4, 200-pound Kasdorf, who said he gets recognized as part of the trade, sees “lots of opportunity” with the Sabres.

“I definitely try not to focus too much on what other guys are doing or what they think of me,” Kasdorf said Tuesday. “I just try to be the best I can be today.”

Kasdorf experienced “a lot of mixed emotions” getting dealt. Leaving the Jets was “a little bit tough.”

“I was excited because Buffalo’s a great organization and they got a great history,” he said.

Kasdorf enjoyed a monster freshman season as the Engineers’ starter in 2012-13, going 14-5-2 with a 1.62 goals-against average and a .935 save percentage in 23 games. Appert believes Kasdorf was “arguably the best goalie in the country.”

But a dislocated shoulder sidelined Kasdorf all but two games in 2013-14. He struggled at times last season, posting some pedestrian numbers – 11-19-2, 2.97 and .902 – in 33 appearances. He also sprained his knee when his game was starting to return, Appert said.

“It was definitely tough missing a whole year of hockey and playing this year,” Kasdorf said. “It was nice to kind of get my feet under me. There was games where I was kind of feeling myself. Just a lot of inconsistencies, so I’m trying to work that out over the summer.”

Kasdorf works at using his size and athleticism in net.

“I think his goal and our goal with him is have him be a combination,” Appert said. “So when it’s time to use your size and play the angles and be smart, he can use his 6-4 size. But when it’s time to read the play and make athletic saves, he has the hockey intelligence and the athletic ability to do so.”

To Appert, “everything’s there” for Kasdorf to become an NHL goalie.

“Just in the last two years, he probably hasn’t been able to play quite as much to as he would like or we would like to get him into that rhythm he needs to be in to be that dominant college goalie,” he said.

Four of Appert’s college goalies have reached the NHL. He said Kasdorf’s better than or just as good as all of them.

“He has the size, the athleticism and the work ethic to be able to be an NHL goalie,” he said. “I think what his future is, our belief is he that he should be right at the top of college hockey this year, come back, have a healthy year and lead us to the national tournament.”

2 thoughts on “Jason Kasdorf could be Sabres’ best goalie prospect”