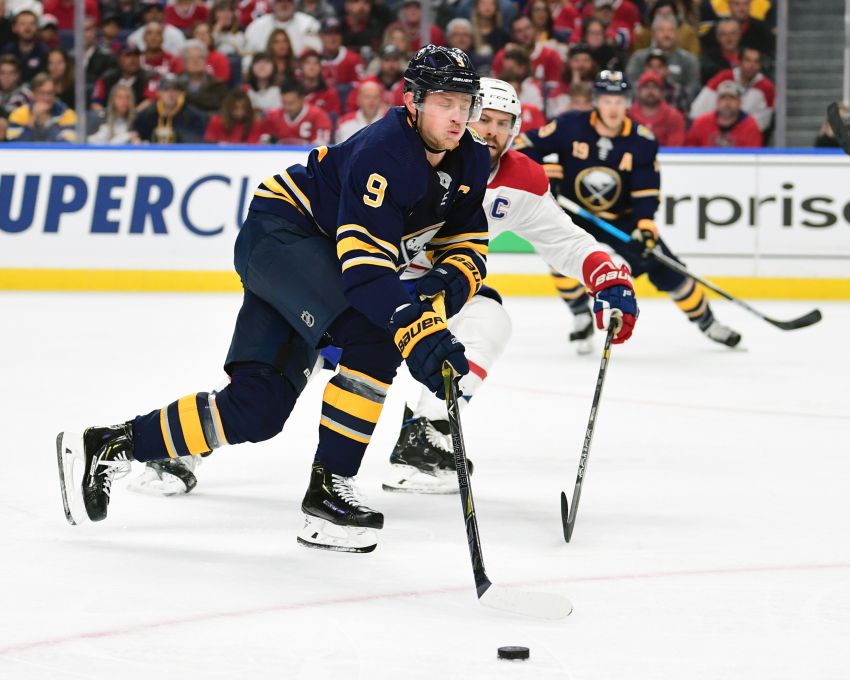 So, yes, on paper, Johansson’s one-timer from the right circle goes down as an even-strength score. But Danault hadn’t even gotten back into the play yet.

Make no mistake, it was a power-play goal.

The Sabres, as Wednesday’s effort illustrated, have a plenty of kinks to work out under new coach Ralph Krueger. Fresh off two strong wins to open the season, they’ve looked sloppy in their last two outings.

Following Monday’s 4-3 overtime road loss to the Columbus Blue Jackets, they blew a two-goal, third-period lead to the Canadiens.

But right now, the Sabres’ power play is downright lethal. It can keep them in any contest and has been perhaps the biggest factor in their best start in years.

So far, the Sabres have converted eight of their 15 power-play opportunities (53.3%). Only the New York Rangers, who have played two games, have scored at a higher rate (60%).

The Sabres have scored multiple power-play goals in three straight games for the first time since March 4 to 7, 2009.

An array of options has buoyed the Sabres’ success on the man advantage.

Everyone is on the ice is a threat. Keying on someone will just open up another guy.

“It’s difficult to defend against,” Krueger said. “We’re in a league of prescouting and analysis to the depths of (everybody knows what) somebody does, but on that power play you have no idea what’s going to come at you. They’re really good at not being stuck in a tunnel somewhere.”

Captain Jack Eichel can find the net or a teammate from just about anywhere. Winger Sam Reinhart is adroit at tipping pucks in close. Winger Jeff Skinner is terrific down low. Defensemen Rasmus Dahlin is quietly becoming one of the NHL’s best point men.

Then there’s rookie winger Victor Olofsson, whose goal from the right circle 5:04 into the game was his fourth on the power play this season and sixth in 10 NHL games.

The Swede, who possesses a dynamic shot, tied a record Wednesday by becoming the fourth player in NHL history to score his first six goals on the power play, joining Jeff Norton, Craig Norwich and Sylvain Turgeon.

“It’s fun, even though I want to score five-on-five, too,” Olofsson said. “Obviously, I’m happy.”

He added: “It’s a great power play right now. We got a lot of confidence out there. I feel like all give guys can score, which makes it hard to defend against.”

The Sabres have so much depth defenseman Rasmus Ristolainen, who has compiled four straight 40-point seasons, plays on the second unit.

“We’re just moving pucks quickly,” said Eichel, who enjoyed a two-goal, four-point night. “(We’re) just trying to put the opposition on their heels. I think we’re doing a good job retrieving pucks as well (and) not letting them get set up.”

Eichel, of course, has superstar-level talent, and he showcased it in the second period.

Following his power-play goal, Eichel grabbed the puck in Buffalo territory, skated through the neutral zone and beat Montreal goalie Keith Kinkaid on a one-on-three from the top of the slot.

“He can be so dominant,” Johansson said of Eichel. “He can take over the game. What he can do with the puck, with the size he’s got, it’s so impressive to watch. It’s fun to watch up close.”

Skinner scored the Sabres’ other goal, putting them up 4-2 47 seconds into the third period.

Then the Canadiens roared back before the bipartisan crowd of 15,838 inside KeyBank Center.

Center Jesperi Kotaniemi scored later in the period and defenseman Ben Chariot tied it at 12:54.