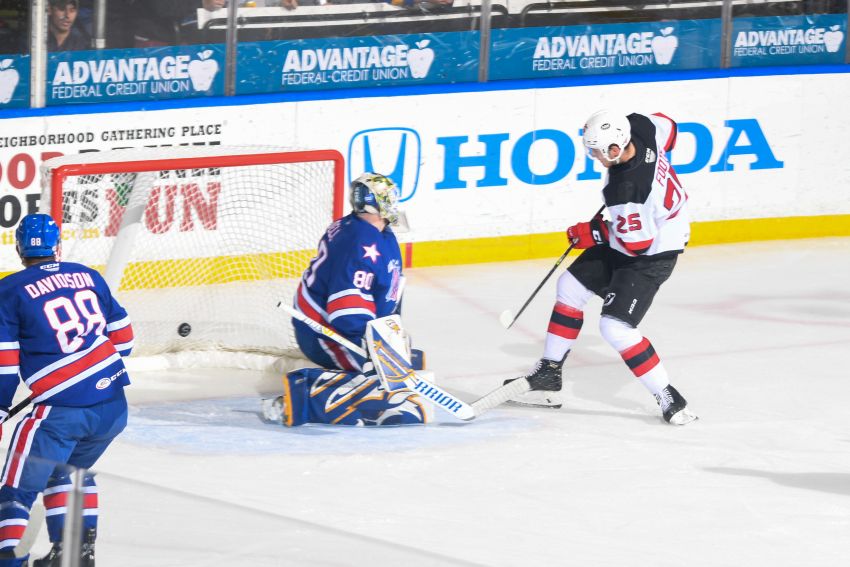 ROCHESTER – In opening up a series lead and putting the Utica Comets on the brink of elimination from the Calder Cup Playoffs, the Americans hadn’t seen the best out of the AHL powerhouse.

The top-seeded Comets only showcased flashes of their slick regular-season form throughout the first three games of best-of-five AHL North Division semifinal. In a do-or-die scenario Tuesday, you figured they would come out roaring.

Well, in Game 4, the Comets gave their most complete effort of the series, throttling the Amerks 4-2 and staving off elimination.

Don’t let the score fool you. The contest wasn’t that close. After falling behind 4-0 in the second period before the crowd of 8,791 fans at Blue Cross Arena, the Amerks scored two late goals.

Game 5 is Thursday in Utica. The Amerks hope they generated a little momentum that will carry over.

“As much as you talk to your team about it, I thought we had too many guys, especially in the first part of the game, on the heels from that level of just urgency, intensity and physicality,” Amerks coach Seth Appert said. “… There’s another level of competitiveness that a championship-caliber team rises to when their back is against the wall, and they did tonight and it took us too long to get to that level.”

The Amerks endured a season filled with adversity, overcoming injuries and significant recalls to eke into the playoffs on the last day of the regular season. The Buffalo Sabres’ affiliate just won its first playoff series since 2005 and has Utica on the ropes.

This has become the Amerks’ most significant season in 17 years, and players don’t want it to end.

“I love this team,” Amerks defenseman Jimmy Schuldt said. “We’ve been playing for each other all year. We’ve been dealing with a lot of adversity. This was a really disappointing one. We wanted to finish it off now.

“It’s going to be exciting to see what we can do with our backs against the wall in a hostile environment. It’s hard not to be excited for that.”

Amerks center Peyton Krebs said of Game 5: “It’s what you live for, right? It’s do or die, playoffs. Those are the moments you dream of as a kid. We want to make the most of it.”

Some other notes on Tuesday’s game are below.

“Jack’s facing (adversity), and I have full faith that he’s going to respond and play a heck of a game in Game 5,” Appert said.

Winger Arttu Ruotsalainen scored the Amerks’ other goal, his seventh goal and 10th point this postseason.

Dell, who’s subbing for injured goalie Ukko-Pekka Luukkonen, had played every minute of the playoffs.

“Simply a rest,” Appert said of the move. “That’s what I said in the locker room at the end of the second, I thought Dell competed his tail off. We didn’t play good enough in front of him. He kept it 1-0 for a long time.”

Mersch, who scored 26 regular-season goals, left the game with an upper-body injury and did not play Tuesday.

Tyce Thompson, 22, missed most of this season recovering from a shoulder injury. He played two games for the New Jersey Devils this year and seven last season, when he made his NHL debut against the Sabres.

– Ex-Sabres center center Brian Flynn is in his first season with Utica after spending three years in Switzerland.

Flynn, 33, played 159 games for the Sabres over parts of three years before they traded him to the Montreal Canadiens in 2014-15, their second tank season.