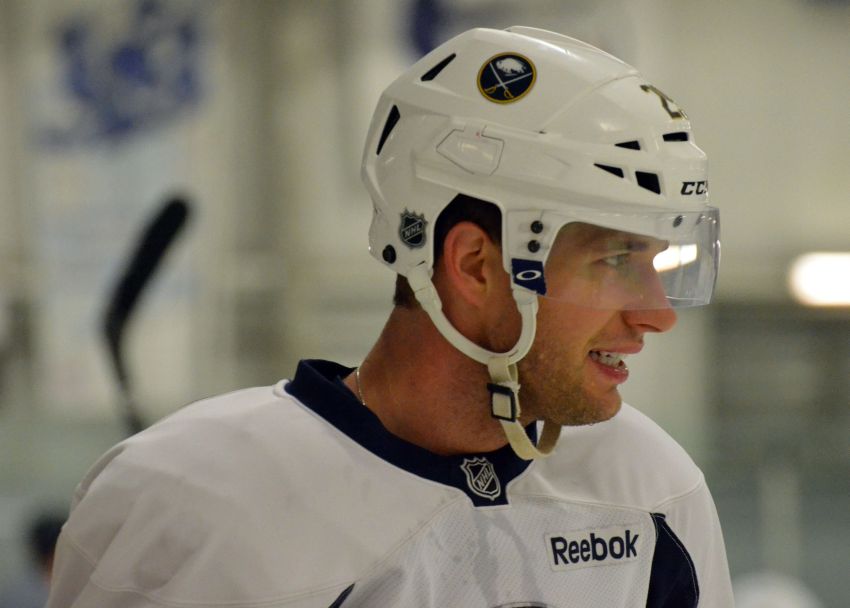 AMHERST – Like other players, Buffalo Sabres captain Jason Pominville heard some positive vibes when he learned the NHL had submitted a new, revamped collective bargaining agreement proposal to the NHL Players’ Association on Tuesday.

The 50-50 split of hockey-related revenue, down from 57 percent for the players under the old CBA, seemed fair and logical to some outside observers. The NBA and NFL both allocated money similarly following lockouts last year. The NHL’s offer is up from 43 percent in its initial July proposal. The league even wants to guarantee current player contracts with no rollbacks.

However, later Tuesday, the union briefed the locked-out players on the full proposal.

“I think there’s a lot of detail in it that doesn’t really advantage the players that much, and once you get to find out what they are and what it really means, I think there’s still a lot of work to be done,” Pominville said Wednesday after skating with seven other players inside the Northtown Center. “We can’t be too excited about it. But I think the good thing is that there is discussion.”

Obviously, the NHL’s offer won’t be accepted in its current form. In a letter to players obtained by TSN, NHLPA executive director Don Fehr called it “not quite as Draconian as their previous proposals” and said the new revenue split “would mean that players’ salaries would be cut by about $231 million” under last year’s numbers.

Still, the NHL’s offer represents progress in a work stoppage that had been devoid of any whatsoever.

“Optimistic, cautiously,” said Sabres defenseman Jordan Leopold, the team’s player rep. “It’s a start in the right direction. Possibly we get some sort of framework out of this and get a deal done.”

Leopold added: “Now we’re able to talk about it. That’s the main focus. We’re talking about core economics. That’s the thing that will get this deal done.”

“There’s a lot of other things that are up in the air that haven’t even been touched on,” he said. “But it’s a point to start, and it’s good way to bring back some of the ideas from our (earlier) proposal.”

Players have lots of questions, said Leopold, who was heading to a union meeting in Toronto after skating Wednesday.

“That’s where Don heavily weighs his opinion on things and … presents it to us and has us logically understand it in terms we could understand,” he said. “We’re not going to rush this. We have to go through it line by line and really figure out what’s in there, and then get some answers if we need to.”

They might want some answers to that potential 50-50 HRR split, the most contentious issue. The union had previously proposed accepting about 53 percent.

“It’s a dip, but 50 percent of what?” Leopold said. “That’s where the definition has to come down. If you look at 50 percent of the last HRR revenue numbers, we’re looking at different breakdowns going forward.”

Pominville added: “You hear 50-50. I think in any business you think it’s a pretty fair deal. I think the reality is there’s a lot much more to it than the 50-50. We got to see the details to understand it better.”

Naturally, players want a full 82-game schedule, something NHL commissioner Gary Bettman said is possible if a new CBA’s reached by Oct. 25. The season would begin Nov. 2, with teams playing one extra game every five weeks.

“I think it’s realistic,” Leopold said about possibly starting the season in 15 days. “Things can move very quickly. It just takes one offer, one phone call, whatever, to really spiral things forward. But we’ll see if we track any ground here in the next few days and see what we come up with.”

Thirty-three days into the lockout, the NHLPA’s still showing a unified front. The union fractured during the 2004-05 stoppage, and the owners crushed the players.

“Guys are informed and guys are involved,” Biron said. “That’s the difference probably from seven years ago.”

“For a lot of players like myself, we go on the ice and we practice and we know the hockey process of going through a season, 82 games, playoffs, all that,” he said. “But what has to be done in boardrooms and bargaining sessions and all that is a little bit foreign. And we’re educated to that, and we can see where the process is going. Now it’s taking shape.”

Sabres defenseman Alexander Sulzer has signed a deal to play with ERC Ingolstadt, a DEL club in his native Germany, during the lockout. Sulzer played five seasons in the DEL before coming to North America in 2007.