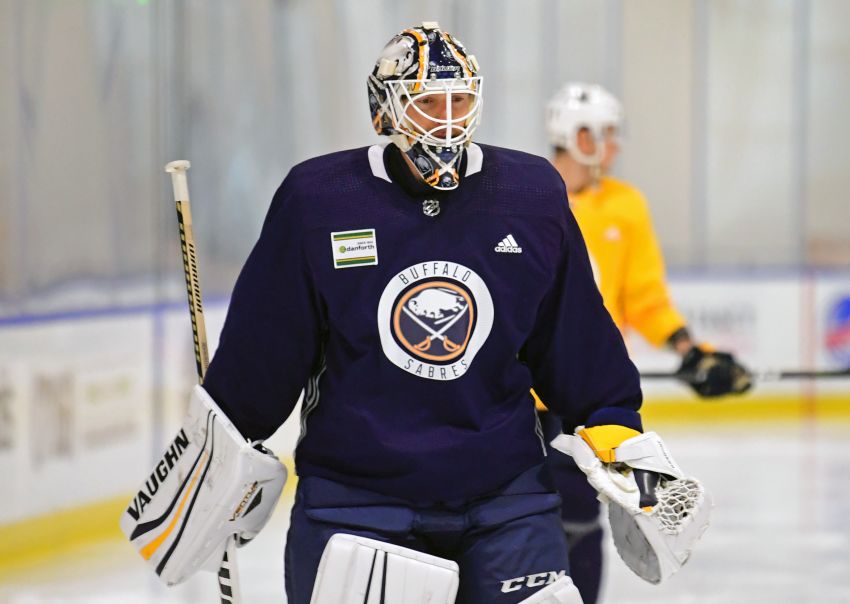 BUFFALO – In eight games this season, Sabres goalie Chad Johnson has accumulated some pretty weak numbers: 1-3-2 with a 3.55 goals-against average and an .885 save percentage.

Those statistics, even with scoring up six weeks into the season, won’t win many games.

Of course, the reeling Sabres, who rank last in the Eastern Conference, have allowed 3.5 goals a game as a team, the NHL’s third-worst total. Their porous defense consistently hangs the goalie out to dry.

Johnson understands goalies are usually judged by their numbers. Still, the backup refuses to let them define his season.

“I feel good about my game,” Johnson said this morning after preparing for tonight’s start against the Carolina Hurricanes. “Obviously, in this game, the numbers mean everything. Unless you’re watching the games from start to finish … it’s impossible (to judge).”

Johnson knows some outsiders have critical thoughts about his game. The opinions that matter most, however, are from within the Sabres.

“The feedback I’m getting from the coaching staff and (goalie coach) Andrew Allen is the most important,” Johnson said inside KeyBank Center. “My game is where it needs to be to have success. The numbers will be there to make everyone happy.”

The Sabres’ play this trying season hasn’t made many people happy. Fresh off Friday’s weak 3-1 loss in Detroit, they’re 0-2-2 in their last four games.

“We’ve been put in this position before and had a great response,” Sabres coach Phil Housley said. “You look at last night’s game, it didn’t sit well with me, I don’t think it sat well with them.”

Johnson said it can take months for a team like the Sabres with a coach and a slew of new players to come together.

“Around Christmastime, the chemistry’s there, the game plan, everyone buys in,” he said.

Look for newcomer Kyle Criscuolo to play more than the six minutes, 56 seconds he played Friday. Housley said the rookie center stood out in his NHL debut.

“In those minutes, I thought he was an effective player, playing well in the zone and finishing checks, bringing energy, he had a scoring chance in the second period,” Housley said. “We’re going to try to find more ice for him.”

In other injury news, forwards Alexander Nylander (lower body) and Evan Rodrigues (hand) made their season debuts in Friday in the Rochester Americans’ 4-2 home win against the Hartford Wolf Pack.