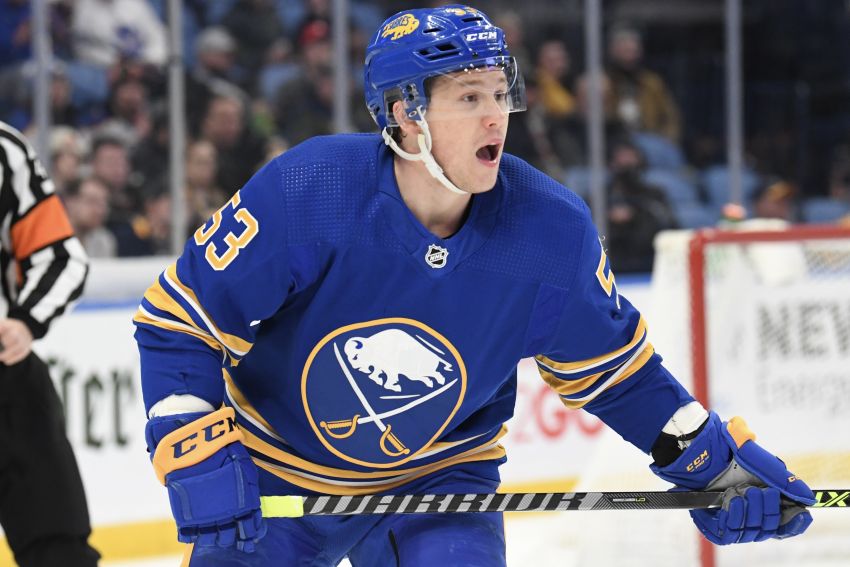 BUFFALO – Thursday’s 3-2 loss to the San Jose Sharks was just the Sabres’ fourth game in 20 days. Right now, they have six players sidelined by COVID-19 and another five out injured.

They’re rusty, having lost the rhythm of a season that rarely let up before COVID started wreaking havoc on the schedule again. And the rebuilding team was fielding one of the NHL’s weaker lineups before injuries and illness started decimating it.

The few thousand fans who braved the city’s first major snowstorm this winter and trekked to KeyBank Center were treated to a downright awful first-period performance by the Sabres.

The Sabres fell behind 3-0 by the 17:24 mark, committing gaffe after gaffe.

“It was not good,” said Sabres coach Don Granato, who sounded more agitated than he has all season. “We had some guys that made some mistakes that shouldn’t have been made. So I don’t want to fault the whole team for it. … The frustration you hear in my voice wasn’t the entire team. It was just some instances they were able to take advantage of.”

The Sabres found that urgency later on, creeping within one goal and outshooting the Sharks 22-5 during the third period. After winger Zemgus Girgensons’ power-play goal at 18:55, center Tage Thompson narrowly missed converting a loose puck in front of goalie Adin Hill in the waning seconds.

So what ignited the Sabres later in the contest?

“I don’t know, maybe the time on the clock,” Skinner said. “But (we had) a little more urgency, I think we had more aggressiveness on the forecheck and it allowed us to get pucks back.”

Goalie Ukko-Pekka Luukkonen kept the Sabres in the contest, making a spectacular save with his left skate or pad on Alexander Barabanov early in the second period.

Granato said he gave “no consideration” to pulling Luukkonen, who wasn’t given much help early.

“His body language was great,” Granato said. “His response, body language after a goal went in. He’s in the zone right now. He wants to play hockey. He’s hungry to play hockey and he believes in his ability right now, specifically at this level. And it’s fun to watch.”

Luukkonen said: “You appreciate that, that you get the chance to show you can still turn it around during the game.”

The Finn, who made 18 saves, said he refused to dwell on the early goals allowed.

“There’s really no point in looking back at those things. I mean, if they score one or two or three, it doesn’t matter,” Luukkonen said. “In the end, you just have to focus on the game in front of you. I think as a team, we have to be more ready for the first period.”

Granato said two players who were ready from the get-go, defensemen Rasmus Dahlin and Henri Jokiharju, “were exceptional.”

“They just elevated,” Granato said of Dahlin and Jokiharju, the team’s top defense pair. “It’s challenging. Obviously, everyone around the league seems to be dealing with health issues. We played to our limit. There were no healthy scratches tonight. Would love to get healthy and a little more competition in the lineup. …

“In the first period, I felt that some guys didn’t push hard enough individually. We need (to be) better there.”