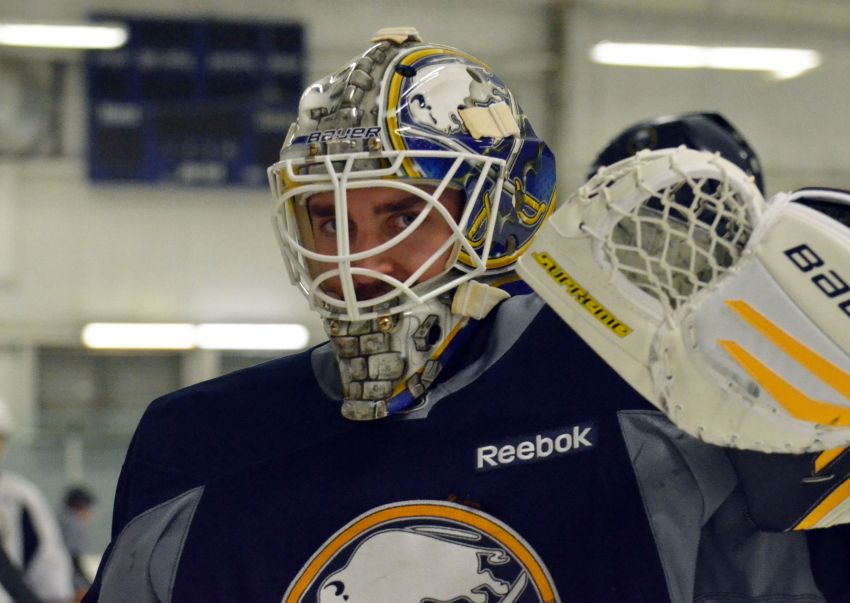 AMHERST – A deal had finally been reached. After two weeks of prodding from his friend, locked-out Sabres goalie Jhonas Enroth agreed he would play one game for a local pizzeria’s beer league team.

On Tuesday, an excited Enroth announced the “one-game contract” to his more than 20,000 Twitter followers.

Playing with no insurance would be too risky.

“My agent called me like 20 minutes after I tweeted that and said, ‘No go,’” Enroth said Wednesday after skating with eight other Sabres inside the Northtown Center.

Enroth should be playing real games soon, however. The 24-year-old’s returning home to Sweden on Friday and could have a contract with a club as soon as next week, he said.

He’s hoping to play in the Swedish Elite League, which he rates No. 3 in the world behind the NHL and KHL.

“If I would go back and play for that league, it would be awesome,” said Enroth, who played in the SEL before coming to North America in 2008. “It would be great to play there during a lockout.”

But is Enroth really excited about the experience?

“Not really,” he acknowledged. “I wish we were playing (NHL games). But it’s going to be nice to go home, see your friends and family like that. I’m excited for that.”

There’s little genuine excitement from any NHL players these days. With the lockout 19 days old and opening night coming up next week, everyone’s bracing for the worst.

“I think you might see games started getting canceled and a lot of money being lost for everyone,” Sabres captain Jason Pominville said.

Whether it’s this week or next, games will be deleted from the schedule. Zero progress has been made during the brief collective bargaining agreement talks. A war of words keeps intensifying. The situation is becoming toxic, some close observers have said.

Pominville, usually a big optimist, can’t be one now.

“I try to stay positive and everything,” he said, “but I don’t think it’s going in the right direction. … As of right now, it doesn’t look too good.”

Right now, however, the NHLPA may be as united as the group has ever been.

Everyone’s not on the ice, however. Practicing isn’t easy for the 10 or so guys left in town.

Pominville gets to play a game tonight in La Tournée des Joueurs, a charity exhibition series pitting players from Montreal against the rest of Quebec.

The winger scored twice last week and enjoyed the experience. Fans packed a 1,300-seat rink outside Montreal. Some even waited in line more than two hours before tickets became available.

“The buildup to this has been great,” Pominville said. “It’s $20 to go see a hockey game basically in your backyard. Not a lot of people have the chance to pay $200, $300 to see NHL hockey at the Bell Centre (in Montreal).”

Pominville’s Montreal team will skate before 2,500 fans tonight and 4,000 on Friday, he said. Spectators like the fast-paced action.

“We don’t want to hurt each other,” Pominville said. “Guys are careful. The pace of the game is fast. Guys work hard. It’s a little bit more of a system game than if we would play shinny. It’s pretty good.”

Pominville’s still exploring his European options. The cost of insurance and the difficulty finding a team isn’t helping, though. Leopold recently worked out insurance arrangements if he decides to go overseas.