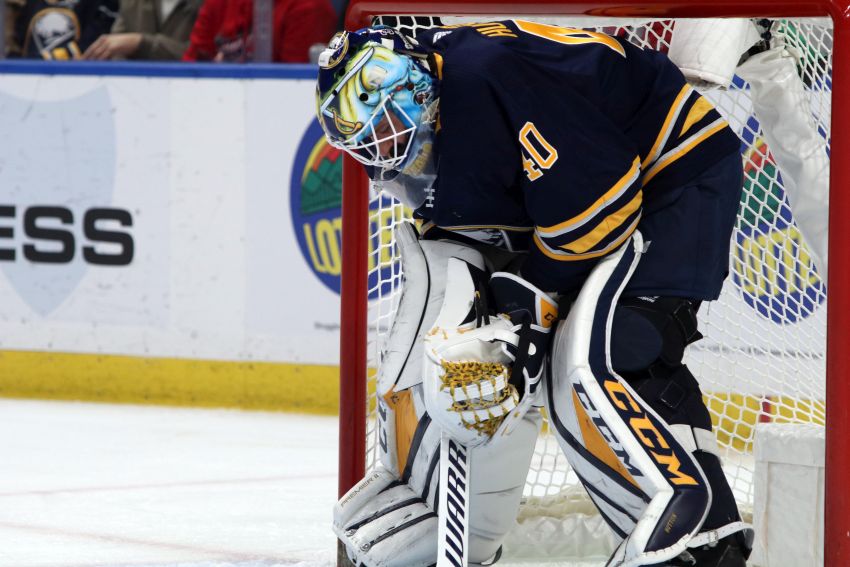 BUFFALO – Late in the second period of Thursday’s ugly 5-0 loss to the Pittsburgh Penguins, a disgruntled fan had enough of the Sabres’ awful performance and gave Jason Botterill his unvarnished thoughts.

“Botterill, this is garbage!” the fan yelled to the general manager, who was sitting in a nearby box, as the Sabres trudged to their third consecutive shutout loss, one of the lowest points in franchise history.

Right now, few would argue that fan’s take. Having not scored a goal 197:40, a stunning stretch of futility, the Sabres are the NHL’s worst team.

Did we mention the Sabres have lost six straight games? Remember, they ranked first overall in late November.

Their in-season regression has been shocking. They could become the first team in NHL history to have a 10-game winning and losing streak in the same campaign.

On Thursday before a crowd of 18,680 inside KeyBank Center, the hapless Sabres, who played without suspended captain Jack Eichel, showed little interest in paying the price needed to generate goals.

“I just think more pride, get to the net,” veteran winger Jason Pominville said of what the Sabres must do to score.

Pominville, 36, is Sabres’ most experienced player. His words hold weight. He mentioned pride at least four times during his comments following the Sabres’ 12th loss in the last 14 outings (2-10-2).

“We gave up two power-play goals and a point shot with an unbelievable screen by them,” Pominville said. “That’s winning hockey. That’s what we got to get back to. We’ve got to have more pride to get to that area, get our nose dirty.

“I mean, it’s a tough league to score in. You’ve got to pay a price to get to the net and we got to get pucks there. Right now, we’re definitely not doing it enough.”

Sabres coach Phil Housley said: “We continue to talk about getting … in front of the net. I think we didn’t do that, whether it was off the rush, we didn’t drive and stop there and play the puck. We could’ve created our own chances more by getting to the net. We got to scrape and claw. We got to get dirty now.”

That has been a huge issue for months. Clearly, the message isn’t getting through.

So have the Sabres, who look beaten down by all the losing, lost their pride? No, said Housley and winger Kyle Okposo, who scored the team’s last goal eight days ago in Chicago.

“Anytime that you put on an NHL sweater, put on a Sabres sweater, you better play with some pride, otherwise you shouldn’t (expletive) be here,” an agitated Okposo said. “I don’t believe that, that we’ve lost that, and if guys have, then they shouldn’t be here.”

Housley’s job seemed safe just a week or two ago. But if they keep losing, can he really return?

Housley, of course, said he’s not worried about his status.

“I’m not concerned about anything except tomorrow when we come to work to get ready for Carolina (on Saturday),” Housley said.

At this point, 70 games into a miserable season, a sudden turnaround seems unlikely.

Casey DeSmith made 26 saves for the shutout, outdueling Sabres goalie Carter Hutton who made 23 stops.