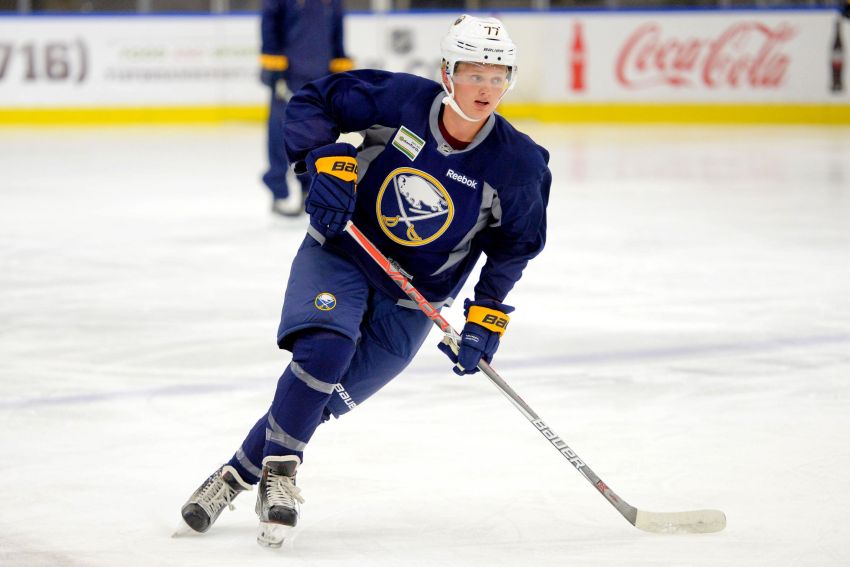 It started getting loud about 20 seconds earlier, when center Casey Mittelstadt put his head down and pursued San Jose Sharks defenseman Erik Karlsson as he raced out of the Buffalo zone on a two-on-one.

“It was crazy,” Krueger said following Wednesday’s practice inside KeyBank Center. “I mean, I’m watching the entire bench cheering Casey’s drive back to our net.”

Winning can breed a lot of things. For the 8-1-1 Sabres, who play a road game tonight against the New York Rangers, it has helped create a lively bench.

A few seconds later, a winded Mittelstadt intercepted Karlsson’s pass around his own net and skated into the neutral zone before circling back into his own end.

Mittelstadt appeared to be taking his time as Eichel and defenseman Rasmus Ristolainen jumped on the ice.

The Sharks, figuring they had a few seconds, also tried to change.

But Mittelstadt, 20, baited the Sharks, quickly passing the puck up to Ristolainen, who was streaking down the left wing on a two-on-one.

Before the Sharks could get their fresh players out, Eichel had buried Ristolainen’s rebound, securing the come-from-behind, 4-3 victory.

Then the Sabres bench exploded again.

“When you hear the players talk and use the word ‘tracking’ in front of you in a three-on-three overtime situation and everybody’s so excited and then it turns into a goal, it’s that lead up to the goal that really makes you proud of what the group is doing as a coach,” Krueger said.

Mittelstadt said he couldn’t remember what transpired before he fed Ristolainen.

“I think was just going to wait for our guys to get on the ice,” he said. “I didn’t think that they were going to change right away. Then when I saw all their guys jump off, then it was pretty easy play for me, I think. Risto and Eichs were pretty open and pretty far apart.”

Mittelstadt downplayed his backchecking, saying he had to pursue Karlsson during the three-on-three session.

“I don’t think it’s that big a deal,” he said. “I think anyone on our team would’ve done it. I guess it’s just something you got to do.”

Krueger, however, made Mittelstadt’s play the focus of Wednesday’s team meeting.

“Pretty much everything that’s happening here on the positive offensively … is coming out of excellent defensive work and decisions that guys are making,” he said.

Krueger said Mittelstadt’s effort Tuesday “was just a microscopic example of what’s going on in this team in general and the character we’ve shown.”

“The commitment we’ve shown without the puck is what’s making even these victories possible,” he said.

“Uh, no,” Mittelstadt said when asked if he ever thought he’d be compared to Lidstrom. “I think that’s my roommate’s job.”

Mittelstadt is roommates with Rasmus Dahlin, a young Swedish defenseman.

After the game, Mittelstadt said one of his friends sent him the clip of Weekes analyzing the play.

“They were just making fun of me the whole time,” he said. “It’s pretty good. It’s pretty funny.”