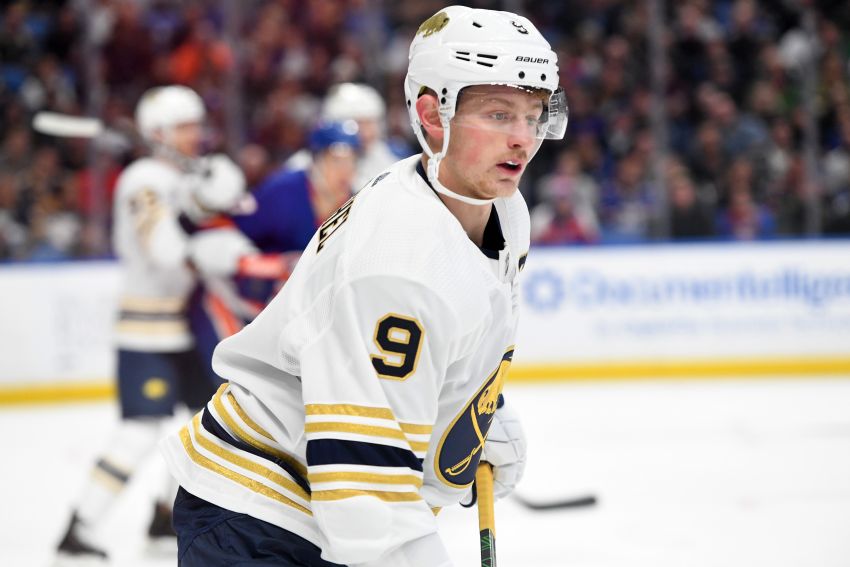 BUFFALO – Coach Ralph Krueger said he could feel the electricity hours before captain Jack Eichel starred in the Sabres’ wildly entertaining 6-4 win over the Toronto Maple Leafs. The season’s first meeting against their fiercest rival would be more than a normal regular-season contest.

“You could feel that it was a highlight day,” Krueger said following Friday afternoon’s win before the bipartisan sellout crowd of 19,070 inside noisy KeyBank Center. “It was an experience outside of the regular 82-game schedule.”

The entire afternoon was a unique experience for the Sabres, who won for just the fourth time in 16 tries (4-9-3).

In addition ending their five-game losing streak to the Leafs, the Sabres’ often feeble offense busted loose, scoring six goals for only the second time this season. They had scored two or fewer goals in 11 of the previous 15 outings.

“(We) finally got an explosion of goals in the second period, which should do our psyche a lot of good,” said Krueger, whose team couldn’t finish its chances in recent games. “In the end, scoring six goals feels very good and very deserved.”

For one of the few times in the last five weeks, the Sabres handled adversity well, roaring back from a 2-0 deficit early in the second before grabbing the lead barely 12 minutes into the period.

Eichel, not surprisingly, was their offensive catalyst. After winger Jeff Skinner scored, he tied it after leaving the penalty box almost halfway through the game. Later in the second period, his nifty moves created linemate Victor Olofsson’s goal that made it 4-2.

Still, what impressed Krueger liked most about his No. 1 center on Friday was the passion he showcased late in a one-goal contest.

“I was most excited about his last couple of minutes, how he came to play without the puck, how hard he defended when they pulled the goalie out,” Krueger said following the Sabres’ first win over the Leafs since March 26, 2018. “He did put one in the empty net but it was the work he did before that I think that shows Jack is maturing right in front of our eyes. Every day is fun coaching Jack Eichel.”

Sabres center Marcus Johansson said: “The way he can take over games, it’s impressive. Not a lot of guys can do that. He’s so dominant when he gets going like that.”

Clearly, Eichel loves facing the Leafs. His 12 goals in 14 career games against them is his highest total and goal-per game output (.86) against any opponent.

The Sabres play the Leafs again tonight in Toronto.

Right now, having scored eight goals and 15 points during his eight-game point streak, Eichel is scorching.

But the Sabres are starting to receive critical secondary contributions.

Sabres winger Jimmy Vesey scored for the third straight game Friday after a 19-game drought to open the season. Meanwhile, winger Casey Mittelstadt scored for the first time in 17 games, briefly giving the Sabres a 3-2 lead.

“A lot of guys stepped up for us,” Vesey said.

“That’s what good teams do – they don’t let the opposition hang around when they have leads, they know how to put teams away, and it’s important that we start to learn how to do that,” Eichel said.

Goalie Linus Ullmark’s effort will get lost, but a slew of critical saves early – he stopped two breakaways – held the Sabres in the game.

“I could’ve probably done a lot more for my boys to keep that third and fourth one out of the net,” said Ullmark, who stopped 25 shots in his fifth start in six games.

But Ullmark, who started the season as Carter Hutton’s backup, has often looked like a difference-maker throughout the busy stretch.

“It’s definitely been a test for him,” Krueger said of Ullmark’s workload. “We like the way he’s growing through the experience. I think it’s one that he’s ready for. …

“If you look at his last couple of wins, he’s been tested at critical phases. We’ve left guys alone in front and he’s had to make big saves. I thought it was a special win for him tonight.”