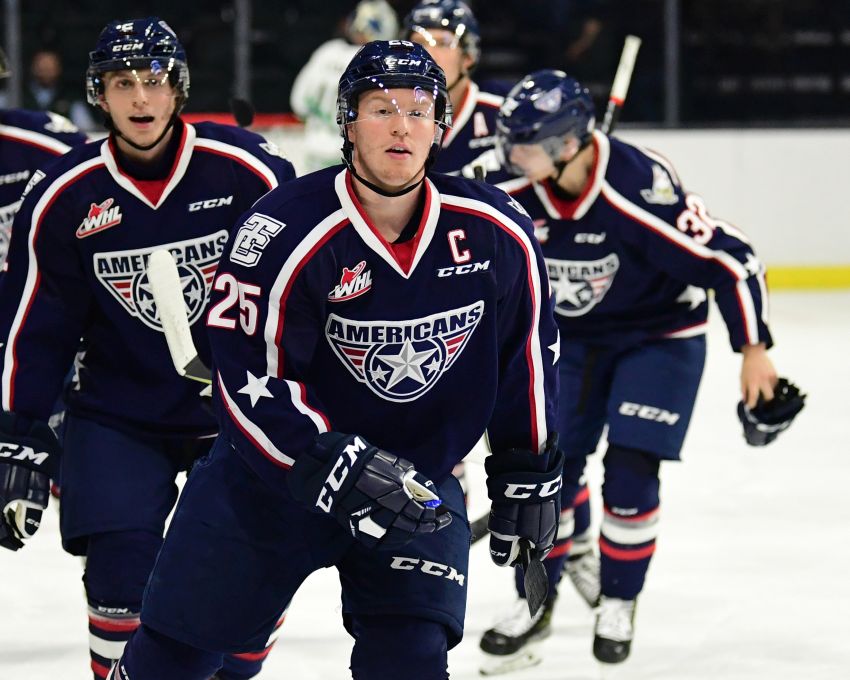 The quick goal turned out to be a harbinger for the rookie camp invite.

Olson, 20, has looked impressive throughout the Sabres’ two wins, showcasing his speed, tenacity and versatility.

Those talents could land Olson, 20, a pro contract. Sexton said Olson has been on the Sabres’ radar a long time. He looked so good at the team’s development camp in June he earned a spot on their rookie camp roster.

“This camp has been kind of a fresh start for me, coming to a new team, a new city,” Olson said following Saturday’s 4-3 win over the Boston Bruins inside Harborcenter.

The Anaheim Ducks drafted him in the fourth round in 2017, 122nd overall, but passed on signing him.

“When one door closes, another door opens,” Olson said. “I’m trying to make the most of this opportunity.”

Of course, playing pro hockey is Olson’s goal in 2019-20. But if he doesn’t earn a contract, he can return to junior for his overage season and captain Tri-City.

If Olson wows again in this afternoon’s tournament finale against the Pittsburgh Penguins, perhaps the Sabres will invite him to training camp or send him to the Rochester Americans’ camp.

Clearly, his style fits well with the Sabres.

“I think it’s just my compete level,” Olson said. “That’s one thing I try to focus on every night, every game. I try to keep that really high. That’s something I pride my game after.”

As a winger Friday, Olson buried a rebound in front in a 6-4 win over the New Jersey Devils. As a center Saturday, he assisted on linemate Matej Pekar’s first goal.

Olson also had a two-on-zero break beside Pekar they couldn’t convert.

“He’s the type of center he’s very responsible on defense,” Pekar said. “He’s always on the right side of the puck. He works hard. Like, he will not lose a battle.”

While Olson doesn’t possess notable size, he has been aggressive and in the middle of scrums.

“That’s part of my game,” he said of his physicality. “I’ve loved doing it. I’ve done it all the way since I was a little kid.”