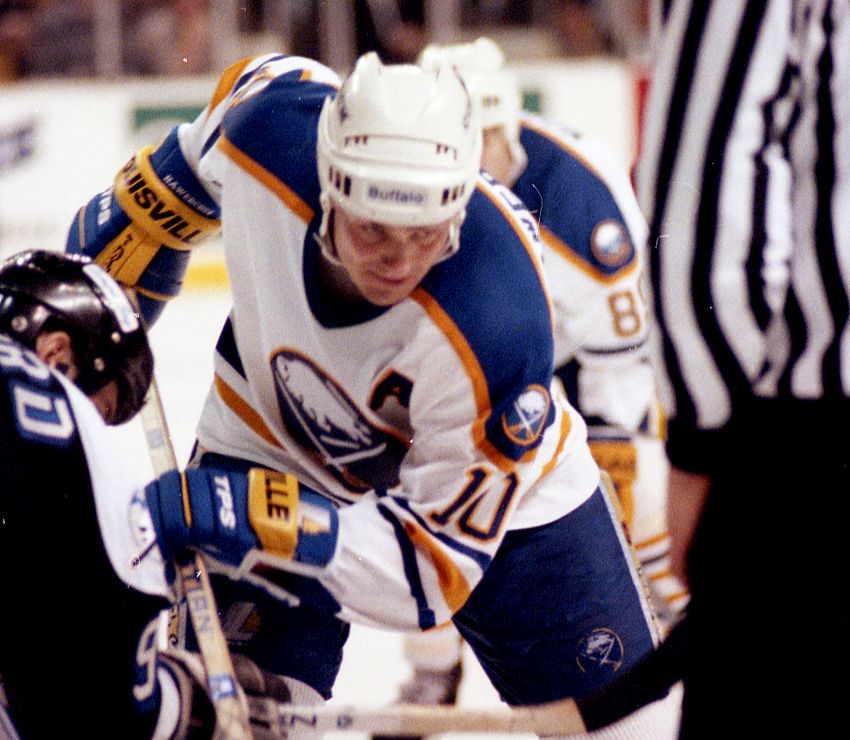 Dale Hawerchuk starred for the Sabres during his Hall of Fame career. ©2020, Janet Schultz

Former Buffalo Sabres star Dale Hawerchuk, one of the most prolific scorers in NHL history and a member of the Hockey Hall of Fame, has died at the age of 57 after battling stomach cancer for a year.

Hawerchuk’s son, Eric, announced his father had passed away in a tweet this afternoon.

Hawerchuk amassed 518 goals and 1,409 points in 1,118 games over his illustrious 16-year NHL career with the Sabres, Winnipeg Jets, St. Louis Blues and Philadelphia Flyers. He ranks 20th in NHL history in scoring.

The Jets drafted Hawerchuk first overall in 1981, and he quickly established himself as a superstar, scoring 45 goals and 103 points as an 18-year-old rookie.

The Sabres acquired Hawerchuk in blockbuster trade in 1990, dealing another future Hall of Famer, defenseman Phil Housley, to the Jets. Hawerchuk quietly enjoyed one of the greatest four-year runs in franchise history, compiling seasons of 89, 98, 96 and 86 points.

“The Buffalo Sabres are saddened to hear of the tragic loss of one of the team’s all-time greats, Dale Hawerchuk,” the Sabres said in a statement. “As we mourn Dale, we reminisce on the wonderful memories he brought Sabres fans during his five seasons in Buffalo. We’d like to send our heartfelt condolences to Dale’s wife, Crystal, and the entire Hawerchuk family during this difficult time.”

After injuries limited him to 23 games during the lockout-shortened 1994-95 season, he signed with the Blues. He retired in 1997.

He coached the Ontario Hockey League’s Barrie Colts for nine seasons before taking a leave of absence last year.

After an incredibly brave and difficult battle with cancer, our dad has passed away. My family is so proud of him and the way he fought. #HawerchukStrong pic.twitter.com/xZ1xcaqAOv