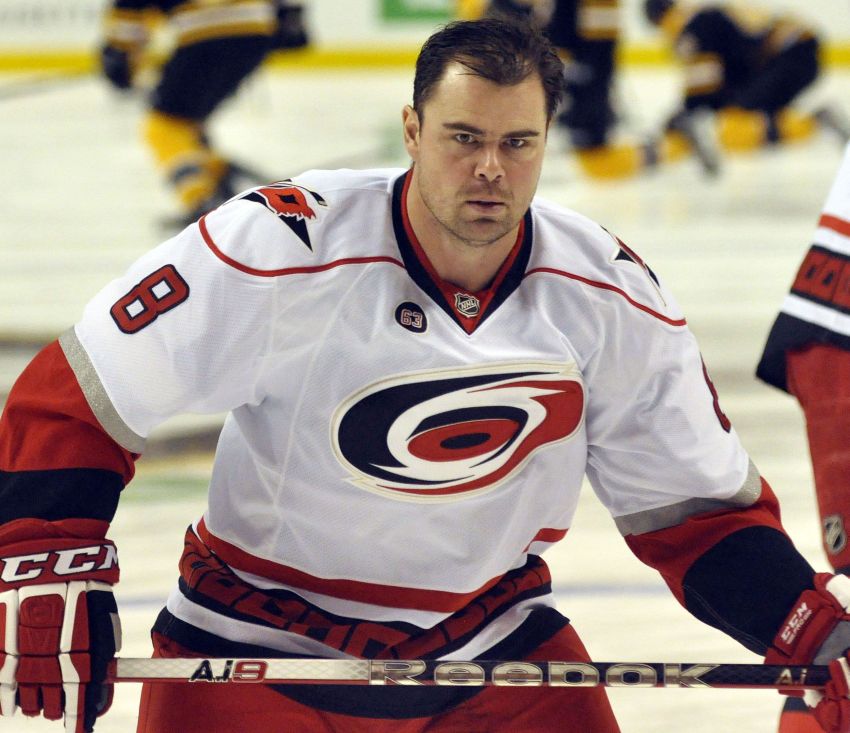 BUFFALO – With three Canadian sports networks and thousands of blogs and message boards bandying his name around all trade deadline day, a nervous Jaroslav Spacek tried to escape the commotion by taking a nap.

The likable Carolina Hurricanes defenseman made one big mistake, though. He left his cell phone beside him. He was barraged with text messages.

“I tried to lay down, enjoy (it). But after 30 minutes I was like, ‘Jesus.’ I turned it on silent,” Spacek said Wednesday prior to scoring a goal in the Hurricanes’ 3-2 overtime loss to the Sabres. “It was crazy – my wife, people back home and even all over Canada. You know, the Canadian press, they were asking me.

“I didn’t respond to anybody. I was just waiting until it was over.”

Finally, Spacek’s wife, who’s staying with their children in Montreal, where he played three seasons, texted him at 3:15 p.m. and told him he was staying put.

“I was kind of happy,” Spacek said.

The 38-year-old’s experienced enough moving around. Counting two stints in Chicago, he’s played for eight teams, including a successful three-year run with the Sabres from 2006-09.

This season might be the most difficult of Spacek’s 13 NHL campaigns. He moved from Montreal to Carolina on Dec. 11 and has been living in Raleigh alone. He’s also endured a few injuries and played only 42 games.

Even leaving the Canadiens was an ordeal.

“They told me, ‘You’re traded to one of the teams you have on the list. I can’t tell you where,’” said Spacek, who was swapped for defenseman Tomas Kaberle. “I was like, ‘What are you talking about?’ It wasn’t approved by the league yet.”

Spacek called his wife, who “was like freaking out (about) where I’m going.”

He found out about 30 minutes later he was going to Carolina.

“I’m actually happy I stayed on the east coast,” Spacek said. “It was easy for me to travel around.”

But he thought an overtime loss to Florida three days before last Monday’s deadline had sealed his fate in Carolina after only 10 weeks.

“I’m like, ‘Oh, I’m gone, just go somewhere else,’” he said. “They kept us all together, and I think that’s a good thing. After I joined the team I think we started to do a better job climbing the ladder. Obviously, we’re pretty far behind (14th place). We’re playing pretty good hockey right now.”

Spacek, an unrestricted free agent following the season, wants to stay with the Hurricanes. This could be his last NHL contract.

He still looks like a solid defender, skating about 16 minutes a night. His goal Wednesday – a heavy one-timer from the point past goalie Ryan Miller – was a typical Spacek tally.

“He said he likes me around,” Spacek said. “I like it there, too. That’s something we got to look at offseason.”

“He’s been doing a lot of hard off-ice (work),” Ruff said. “He hasn’t had hard on-ice stuff that we like to put players through.”

The news isn’t as good for center Jochen Hecht, who’s “kind of stuck in no man’s land” after suffering his third concussion in 10 months, Ruff said. The 34-year-old has missed 20 games.

“With the extra exercises, he’s had some good days and had some days that weren’t quite as good,” Ruff said. “So we’re kind of stuck in that area where we don’t know where he’ll be going next.”

Meanwhile, defenseman Andrej Sekera (flu) missed his second game. He could join the team in Ottawa if he feels better, Ruff said.