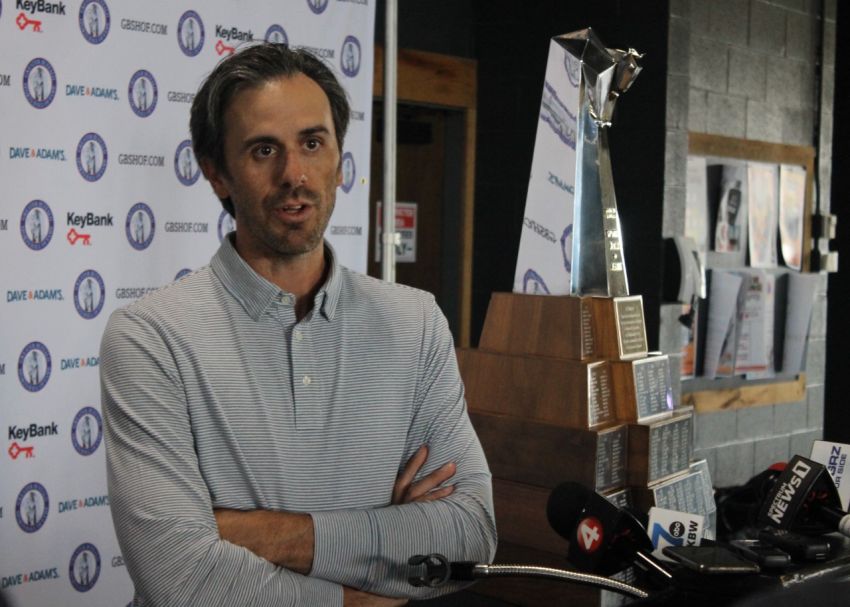 BUFFALO – This place, ex-Sabres goalie Ryan Miller said, is part of “the family folklore.” Having been traded more than eight years ago, his son, Bodhi, had only heard about the city where his father became a hockey legend.

So when Miller, 41, was recently elected to the Greater Buffalo Sports Hall of Fame, he knew this visit would be extra special. He and his wife, actress Noureen DeWulf, could show their 7-year-old why Buffalo remains so special to them.

They could stop by KeyBank Center, their old house and other locales. Miller said they promised Bodhi “all kinds of fun stuff here.”

“That’s my first thought, get to go home and kind of have a nice family celebration of what Buffalo meant to me over the years and another chance to say thanks,” Miller said Wednesday during a news conference at Buffalo RiverWorks to introduce the 2022 inductees.

Miller grew up in Michigan, played for three NHL teams after leaving the Sabres and currently lives in California. Still, he referred to Buffalo, where he spent his first 11 seasons, as “home.”

“I always feel like this is where I kind of grew up,” said Miller, the Sabres’ all-time leader in wins and the 2009-10 Vezina Trophy winner. “I went to college in my hometown, and then this was my chance to kind of step out on my own.”

These days, Miller joked he leads “very much a homemaker’s life.” He retired following the 2020-21 season, his 18th in the NHL and fourth with the Anaheim Ducks.

With DeWulf pregnant – she gave birth to a girl, Kaia, on April 4 – and COVID-19 still around, Miller mostly took it easy in the months following his retirement.

“Very much a slower existence, kind of focus on making sure our new little girl Kaia got into the world OK, and now we’re kind of venturing out,” said Miller, who was visited Wednesday by legendary play-by-play man Rick Jeanneret and some former teammates. “This is kind of the first trip we’re able to take.”

Miller, however, has kept one foot in hockey. He was supposed to serve as an assistant coach on David Quinn’s Team USA staff for the Beijing Games before COVID forced the NHL to pull out of the Olympics.

“I was trying to dip my toe in,” Miller said of coaching. “The Olympic thing just didn’t work out. My familiarity was with the NHL roster. And when the NHL stepped back, they changed the coaching staff and everything.

“Noureen was about six months pregnant by the time we were going to go to China. So that coupled with they weren’t guaranteeing you an exit out of China (if you tested positive for COVID), I just thought it was best to kind of pump the brakes and back off. But I’m looking to do some other stuff.”

Miller, who served on the competition committee as a player, said he has been working with the NHL’s Hockey Operations Department “helping out with on-ice rules and game play stuff.”

He said he plans to stop by the NHL Draft next month and stop by the general managers’ meetings. He could also eventually do other work for USA Hockey.

Miller, who’s known for his cerebral view of the game, seems like a natural for an NHL management position someday.

Of course, Miller keeps tabs on the Sabres, who are still searching for his replacement. They haven’t had a top-tier goalie since they dealt him to the St. Louis Blues.

Miller said the Sabres, who finished the season on a 16-9-3 run, their most significant stretch in years, are “making good progress.”

“They’re making the right decisions,” Miller said. “They certainly had the resources and the flexibility in the last few years to make big choices and they’ve stayed patient. I think that’s the key, stay patient, let the players develop the right way. That’s what helped so many teams you see performing at a high level.”