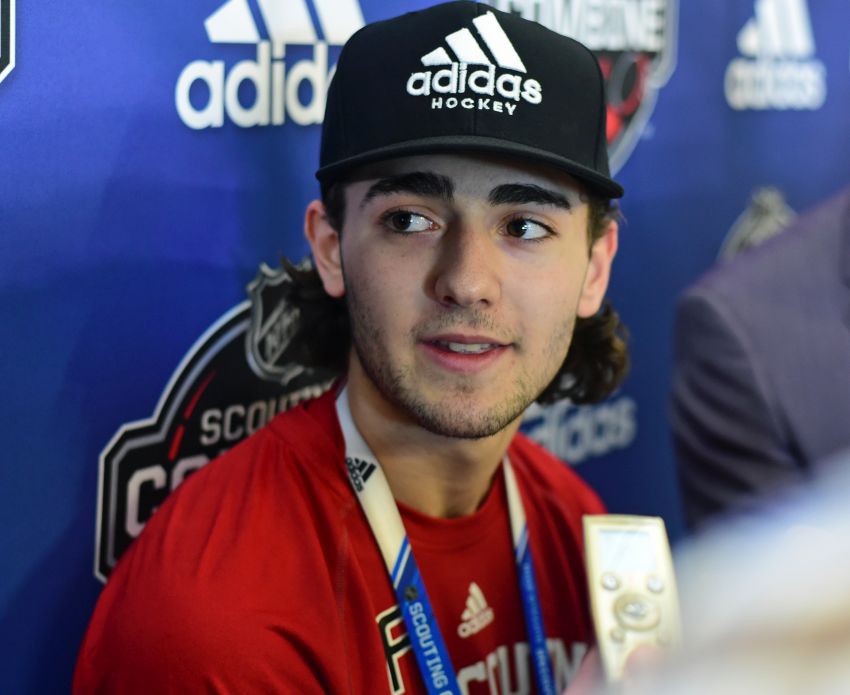 BUFFALO – Even after Liam Kirk reached the pinnacle of British hockey, earning a spot in his country’s top pro league at just 16 years old, the NHL remained a far-flung dream for the English prodigy.

After all, in the NHL’s long history, zero players who were born and trained in the United Kingdom have played even one game. So while Kirk said he always believed he possessed the talent to make the NHL, he never thought an opportunity could materialize.

“As a kid from Britain, you don’t expect this,” Kirk told a throng of reporters Saturday after undergoing fitness testing at the NHL Scouting Combine inside HarborCenter.

But then last October, as Kirk began his first full season competing against men in the United Kingdom’s Elite Ice Hockey League, word began spreading about the largely unknown forward.

“There started to be some talk about this draft-eligible player playing professional hockey in England, which at first glance, (it’s like), ‘OK,’” NHL Central Scouting’s Dave Gregory told the Times Herald. “But then some legitimate hockey people started saying it looks like there’s something here with this kid.”

So Central Scouting examined the videos they had of the 6-foot-1, 156-pound Kirk. Some of the organization’s scouts also watched him in person around midseason.

“Even in that little bit of time, a couple viewings, you saw there was something there,” Gregory said. “That’s what our guys in Europe said, and a lot of teams verified that as well, to accomplish what he did as a 17-year-old in a league where if you look at some of the names in that league, these are guys that have played in the NHL.”

Central Scouting rated Kirk 65th among European skaters in its final rankings of the 2018 draft-eligible prospects. He was also invited to the combine, becoming the first Brit to ever participate in the event.

Kirk, 18, could be a late-round pick at the NHL Draft on June 23 in Dallas. He said he spoke to 10 teams at the combine, including the Sabres, who reportedly have a strong interest.

“He can open the door to the big old world, the NHL, that there are guys here that are learning and doing and eating and training the right way,” said Paul Thompson, Sheffield’s coach. “He’s so humble about it. He’s got his head firmly placed on his shoulders. …

“He knows exactly what he wants and when he wants it.”

What kind of talent does the speedy Kirk possess?

“He can get himself open, he can … drive wide on a guy, he’s pretty nifty down low,” Thompson said. “I think the wow factor is, is he going to create something, is something going to happen? He does. He finds a way to create offense, and because of his speed, things happen. …

“But the wow factor is, ‘Jesus Christ, is he going to get a scoring chance again?’”

On Saturday, about 20 media members crowded around Kirk to learn more about his unlikely journey. He said simply talking about hockey with the media was a “pretty cool” experience.

Kirk understands he’s a bit of an oddity. Only a few Brits have ever been drafted.

“I’m just unique and from England,” he said. “That’s kind of a talking point for people. I know a lot of time in interviews the questions are, ‘You play hockey from England?’ It’s probably just that.”

Why did a kid from Great Britain choose hockey over, say, soccer, a sport far and away the country’s most popular.

When Kirk was growing up in Sheffield, some friends invited his family to a Steelers game. His parents knew little about the sport. Still, Kirk began playing hockey and fell in love with the game.

He also played cricket, his father’s preferred sport. But hockey became his passion.

At first, Kirk’s ultimate goal was to play for his hometown Steelers. Then he learned about the NHL.

“When I realized what the NHL is and what it meant, that was always my goal,” he said.

Kirk’s development into a draft prospect is stunning considering the obstacles he overcame. The coaching for youngsters in Britain is, well, not the greatest.

“The coaching in Britain’s mainly just parents and players on the team,” Kirk said. “There’s no kind of coaches that have been taught the North American style or anything like that. They kind of just pick it up themselves.”

Ice time is also very limited. While Kirk was talented enough to skate regularly, most kids might only receive an hour or two of ice time a week.

Incredibly, Kirk said Thompson was “kind of the first real coach I’ve had that taught systems, how to play the game.”

Since British hockey doesn’t utilize a junior system to feed the pros like in North America and many European countries, Thompson started what he called an “apprenticeship” system after he took over the Steelers.

So for the 2016-17 season, Thompson invited Kirk to join Sheffield on a limited basis. He practiced with the Steelers but mostly played in a lower league.

Kirk impressed Thompson enough to earn 19 games with the Steelers, becoming the team’s youngest goal scorer ever as a 16-year-old. Thompson also made Kirk pay his dues, so he often cleaned the team’s bus or picked up after breakfast.

“You got to learn the ropes,” Thompson said.

By the 2017-18 campaign, Thompson felt Kirk deserved an opportunity to play with the Steelers regularly.

Britain’s hockey history isn’t exactly storied, although it’s only one of six countries to have won a gold medal (1936) in the Olympics.

The EIHL, Thompson said, is better than Britain’s national team, which qualified for the 2019 World Championship earlier this spring. For the first time in 25 years, the country will compete against the top group of hockey heavyweights. Kirk played on that team, again facing men who have experience in elite pro leagues.

Thompson believes EIHL teams are at a level in between the ECHL and AHL. Former NHL players and draft picks are sprinkled throughout the league. Each team is allowed 14 imports.

For example, three of Kirk’s recent Sheffield teammates had NHL experience. He also played with center Colton Fretter, who scored 24 goals for the Portland Pirates in 2008-09 under the Sabres’ AHL affiliation. Former Sabres defenseman Tyson Strachan just won a championship with the Cardiff Devils.

Not surprisingly, Kirk acclimated a little slowly to the league.

“We play a similar style to the North American hockey, so there’s quite a fast pace and quite tough and physical,” he said.

Thompson said: “He still wasn’t physically quite there at the start of the year.”

Then everything started clicking around Christmastime. Thompson said Kirk realized “what it took to be a professional.”

“I’ve never seen a rise in a kid for three months like I did with him,” he said.

In 52 games, mostly in a third- or fourth-line role, Kirk compiled nine goals and 17 points.

Kirk is done in Sheffield, at least for now. He plans to play junior in the Canadian Hockey League next season as an import. He’s eligible for any of the CHL’s three leagues. His preference would be an Ontario or Western Hockey League club.

Talent and maturity helped buoy Kirk this far. Thompson said the teenager makes the proper sacrifices for his career.

“He’s prepared to put his life on hold while he chases what to do,” he said. “It’s what every good athlete needs to do, rightly or wrongly.”

Kirk doesn’t consider himself a pioneer.

“I’ve always believed I could do it,” he said. “It would be great if I’m not the only one who does it.”