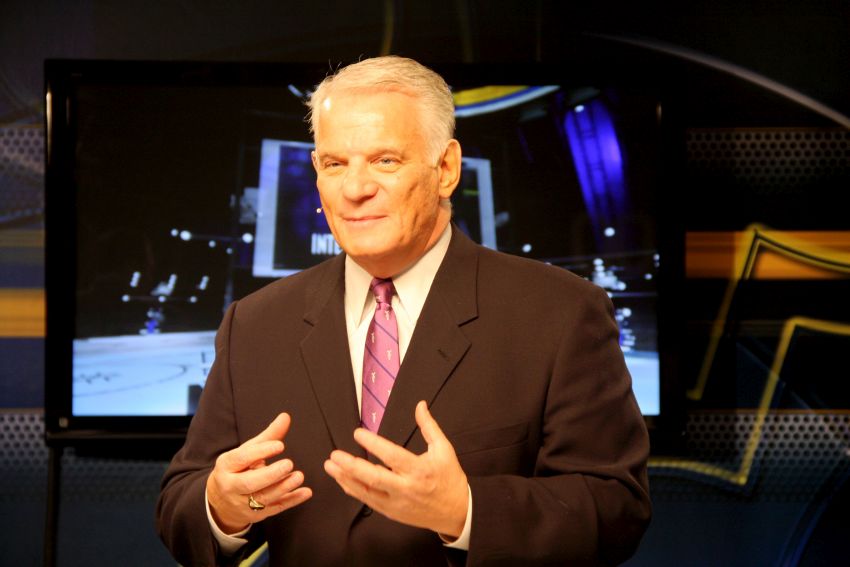 Editor’s note: This is the first in a three-part series on popular ex-Buffalo Sabres defenseman Mike Robitaille.

Until a few weeks ago, Mike Robitaille would wake up every morning dreading the shower. Taking one felt like hell. Moving his hands up to his head or below his waist might send a high-voltage shock through his chest, down his neck or even into his feet.

Of course, the searing pain he experienced wasn’t exclusive to the shower.

Simple tasks most people take for granted – getting out of bed, shaving or putting on a pair socks – could be arduous or downright impossible for Robitaille, the popular ex-Buffalo Sabres defenseman and broadcaster.

“There’s a whole bunch of bones in my back that are broken, fractured and out of place,” said the 73-year-old Robitaille, who will be inducted into the Greater Buffalo Sports Hall of Fame tonight.

Robitaille’s chronic pain can be traced to a neck injury he suffered during a road trip in early 1977. When he informed the Vancouver Canucks about it, they told him it would be addressed when the team returned home.

“Every time I’d play a game, a guy would touch me and I’d be involuntarily shaking,” he said.

Robitaille was contusing his spinal cord. He couldn’t move his neck and had trouble swallowing.

Still, he would play about 25 or 30 minutes a game, albeit hunched over.

“I was just ready, like a time bomb, ready to go off,” he said. “I just needed something to set it off.”

Then on Jan. 19, 1977, the Pittsburgh Penguins’ Dennis Owchar throttled Robitaille as he was looking down for the puck on the Pacific Coliseum ice.

“That was the end of my career,” Robitaille said.

Instead of receiving medical attention on the ice, Robitaille, who had a broken neck, was dragged off by a trainer and a few teammates.

“I can’t believe that they didn’t call for a stretcher,” said a commentator calling the game. “I don’t understand it.”

Underneath the stands, Robitaille was put on a stretcher face-first and wheeled away, the trainer holding his legs as they dangled over the end.

“Robitaille now being wheeled, I would suspect, to an ambulance and to a hospital,” said the other commentator.

But Robitaille never made it to the hospital that night.

“They said, ‘Go home and have a shot of Courvoisier, you’ll be fine in the morning,’” Robitaille said.

At 6 a.m. the next day, the trainer knocked on Robitaille’s door and told him he needed to go to the hospital.

The Robitailles’ ensuing fight with the Canucks over their negligence nearly left him penniless and blackballed from hockey. The team told reporters the injury was all in Robitaille’s head and it was simply a shoulder problem. Some of his friends deserted him.

Robitaille and his wife, Isabel, did something unthinkable for that time and battled the Canucks in court. They won $355,000 in damages.

In addition to his duties as an analyst, Robitaille helped run Robitaille Real Estate and was later general manager of Fort Erie Race track.

The Robitailles, who have two daughters, Anique and Sarah, have enjoyed a nice life since those turbulent years.

But Robitaille has endured a life with chronic pain.

When he was working games as a color analyst or co-hosting the popular “Hockey Hotline” postgame show, he might feel stabbing pain is his feet.

He would grit he teeth and talk through it. The viewers never knew he was in agony.

In 2010, Robitaille suffered another spinal cord injury when his car was rear-ended. Another accident could’ve put him in a wheelchair, so he had surgery to protect him from sustaining further damage.

Robitaille battled through the end of his career. When he worked as a studio analyst, the cold rink worsened his fragile condition. Following games, the pain was so severe he could barely get out of his car.

Robitaille couldn’t take it. When he made into his Williamsville home, he would tell Isabel to phone the Sabres in the morning and inform them he was finished. No money in the world was worth what he had to endure.

Then in the morning, he’d poke her in the ribs and tell her to cancel that call. He felt better.

In 2014, Robitaille decided to retire.

“It was a good day when I decided to pull the plug on that and just say, ‘That’s enough,’” he said.

Then last month, Robitaille received a steroidal injection at the bottom of his spinal cord from University at Buffalo Neurosurgery. Suddenly, the pain declined.

“I was a seven or eight on a pain scale out of 10 before, now it’s like a two, three,” he said. “But it doesn’t necessarily mean it’s going to stay there. It’s just a trial-type thing. And if it stays that way, boy, I’ll tell ya, it’ll make a difference.”

So far, it has made such a difference that Robitaille can take a normal shower, put his socks on and do other everyday activities. At church, he kneels and stands up straight. He even showed off to Isabel by dropping down for some push-ups.

“These infusions with the steroid is like a miracle,” said Isabel, who loves that her husband can get out of bed without a rolling start.

Late last month, on a mild morning, Robitaille woke up around 5 or 6 a.m. and started his normal morning routine by putting on the BBC to catch up on the news.

Robitaille has a one-mile walking route around his neighborhood he had often wished he could complete.

But on that day, he felt so good he went back upstairs, got dressed – “Put socks on and everything,” he said – and completed that walk.

“I couldn’t (expletive) believe it,” he said. “I mean, I haven’t gone for a walk like that, it was just awesome.”

When the Robitailles learned Mike would be inducted into the Hall of Fame, Isabel worried about how he could handle a busy night on his feet. That, however, won’t be much of a concern.

Robitaille, who also credits the other work chiropractors have done for him, is cautiously optimistic about his health. He probably hasn’t felt this good since the 1970s. He said he can receive an injection every three months. One can last for up to a year.

“It’s great,” he said. “It’s like I’m just waiting for something and it’s not happening. I stand up straight and I’m not hunched over. I can go for a walk with Isabel. It’s nice. She used to have the dog to go for a walk. Now she has me.”