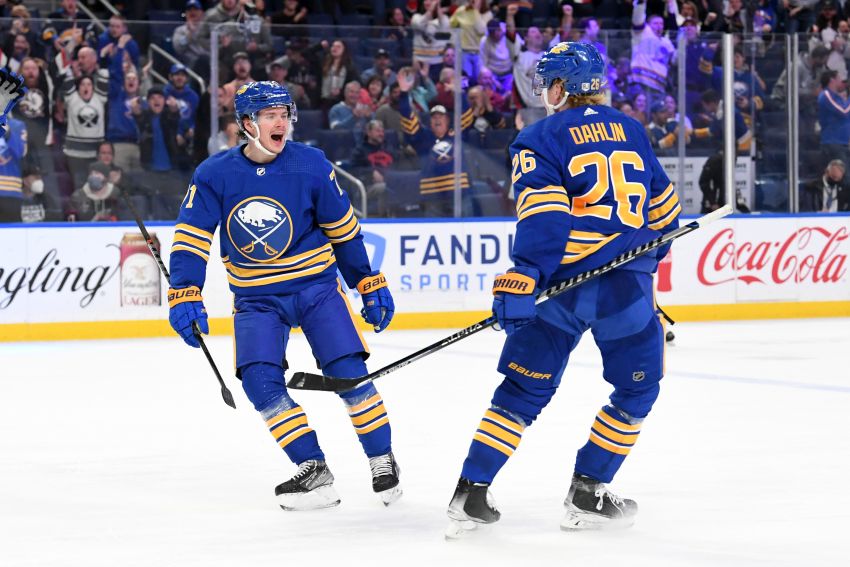 As the puck rimmed around the left boards with Tuesday’s game tied late, it appeared to be leaving the Carolina Hurricanes zone. But Sabres defenseman Rasmus Dahlin said he “fake pressured” one of the Hurricanes, forcing him to move the puck. Dahlin then batted it down inside the blue line before quickly spotting Olofsson in the right circle.

No one was near Olofsson, who unleashed a wicked shot, putting the Sabres up 3-2 12:08 into the third period.

“I had all the time in the world,” Olofsson said after the Sabres’ 4-2 win, their first triumph over the Hurricanes since March 22, 2016. “It was a great play.”

“We’ve talked about no hesitation, being fearless, and when you’re that it unleashes the ability, it unleashes the skill,” Granato said. “He stayed engaged. He had his net behind him and 120 feet of ice to cover but he stayed in the battle right in front of them.”

Dahlin said he found Olofsson “in his office.”

“You have to give him the puck, he knows what to do down there,” he said. “So great shot by him, huge goal.”

Olofsson then registered the primary assist on center Dylan Cozens’ power-play goal at 15:11, which sealed the Sabres’ eighth win in their last 13 games.

Following a wretched, career-worst stretch in which he endured a 30-game goal drought, Olofsson has caught fire. Clearly, he’s recovered from the upper-body injury that hampered his shooting, his best asset.

The Swede has scored nine goals in his last 17 games and has scored 16 times overall this season.

“When you don’t score for 30 games, it obviously goes to your head and you think a little bit too much whenever you get a good chance,” Olofsson said. “I feel way more way more confident right now and the puck seems to keep finding the net, which is a little bit of a relief and makes things a lot easier.”

Tuesday’s victory before a vocal crowd of 8,984 fans inside KeyBank Center was just the Sabres’ latest against a heavyweight opponent. In another tight game, they pulled away late, a sign of their growing maturity.

“We’re super confident as a group right now,” Olofsson said. “Even when they scored at 2-2, we just kind of settled down a little bit and just kept it a little bit more simple.”

After Carolina’s Jesper Fast opened the scoring 14:58 into the game, winger Jeff Skinner tied it 1:21 into the second period, connecting on a nifty feed from center Tage Thompson on a two-on-one.

Thompson held the puck and looked like he was going to shoot from the right circle before feeding Skinner for his 29th goal.

As Granato watched the play unfold on the bench, he wanted Thompson to shoot.

Granato said the play illustrates what Thompson can create playing center, a position he moved to late in training camp.

“He’s a 30-goal scorer, he’s staring right at the net, and he still has the presence to manipulate and make that play,” Granato said.

You think Skinner enjoys playing his old team? He has now recorded six goals and eight points in eight career outings against the Hurricanes.

Center Casey Mittelstadt put the Sabres up 2-1 5:59 into the second period, his ninth point in the last nine games. Then Nino Niederreiter tied it 4:10 into the third period.

If goalie Craig Anderson hadn’t kept the Sabres in it early, the game could’ve gotten out of hand. The veteran made 12 stops in the first period and 32 overall.

“That was huge,” Dahlin said of Anderson’s early play. “I mean, we all are so calm when he’s in the net, and he makes those big saves and keeps us in the game. … He was awesome tonight.”