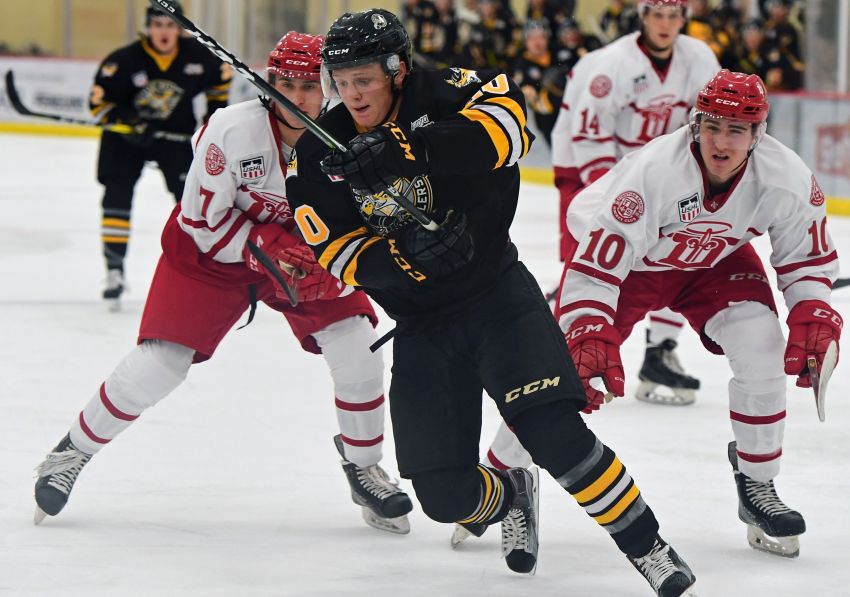 BUFFALO – Lee Smith figured Casey Mittelstadt was simply reacting to Eden Prairie’s emotional, season-ending loss. Once the high school hockey superstar settled down, the coach thought to himself, he would change his mind.

In the moments after Smith’s Eagles lost in the final of the 2016 Minnesota State High School Hockey Tournament, Mittelstadt, the eighth overall pick by the Sabres on June 23, told Smith he would return for his senior season.

“My first reaction was, ‘Yeah, sure you are,’” Smith told the Times Herald.

As a top prospect, Mittelstadt enjoyed some nice options for his senior year of high school. The slick center could join the United States Hockey League, a junior circuit that helped produce 48 NHL draft picks last month, or play at the University of Minnesota because he had earned enough credits.

“I thought the advisers and everyone would pretty much get a hold of him and would pretty much force him to (go),” Smith said. “They didn’t. A lot of people told him, ‘Casey, wherever you play, people will come and watch you.’”

Mittelstadt wanted to win a state championship so badly he returned to Eden Prairie in 2016-17, an unusual decision for an elite prospect. He only played with the USHL’s Green Bay Gamblers before and after the high school season.

Mittelstadt, Smith said, had “one goal.”

“Nick Leddy’s a legend in our town because he won a state tournament,” Smith said of the New York Islanders defenseman. “(Florida Panthers winger) Kyle Rau is another one. Casey wanted to be looked at in one light as far as … helping lead his teammates to a state championship.”

“It’s such a gift to be able sit back and watch him do his thing,” Smith said. “The thing people don’t understand is the teams we play are pretty damn good.”

Mittelstadt’s talents, of course, are special. Forty prospects will be on display at the Sabres’ annual development camp over the next four days, starting with two sessions today (2 and 4 p.m.) at HarborCenter.

“It’s a gift,” he said. “You throw out a name like (Chicago Blackhawks superstar) Patrick Kane, you say, ‘Well, that’s a pretty big name to throw out. But Casey’s style of play is a lot like his, skate into the zone and come across the line and enter the zone, pull up.

“To be able to make that play at full speed and see his teammates, to be honest with you, it’s a challenge to find guys that are good enough to play with guys who are that talented.”

Sabres fans, of course, will be interested in getting their first glimpses of the 18-year-old Mittelstadt, who plans to play NCAA hockey at Minnesota next season.

Smith said they will also like Mittelstadt the person.

“He’s very humble for what he does,” he said.

Smith said Mittelstadt “kept challenging himself” and “sacrificed” to get drafted, choosing to hone his hockey skills over other teenage activities.

He believes all those qualities have made Mittelstadt a “very detailed” youngster.

“He’s as much a professional player as far as temperament as I’ve ever coached as far as showing up, being ready to play, practicing hard, calling teammates out – not in a bad way,” he said.

Smith has been asked if Mittelstadt’s unusual decision to play high school as a senior meant he was afraid to go to the next level.

Mittelstadt compiled 13 goals and 30 points in 24 contests with the Gamblers. Incredibly, Smith said Mittelstadt thought it was easier to score in the USHL.

“The (high school) game isn’t really reffed closely, so he took a lot of physical abuse in the game this year because they’d send a guy on him, and anytime he’d touch the puck, they send another guy on him,” he said. “He was pretty much double-teamed, if not triple-teamed, at all times.”