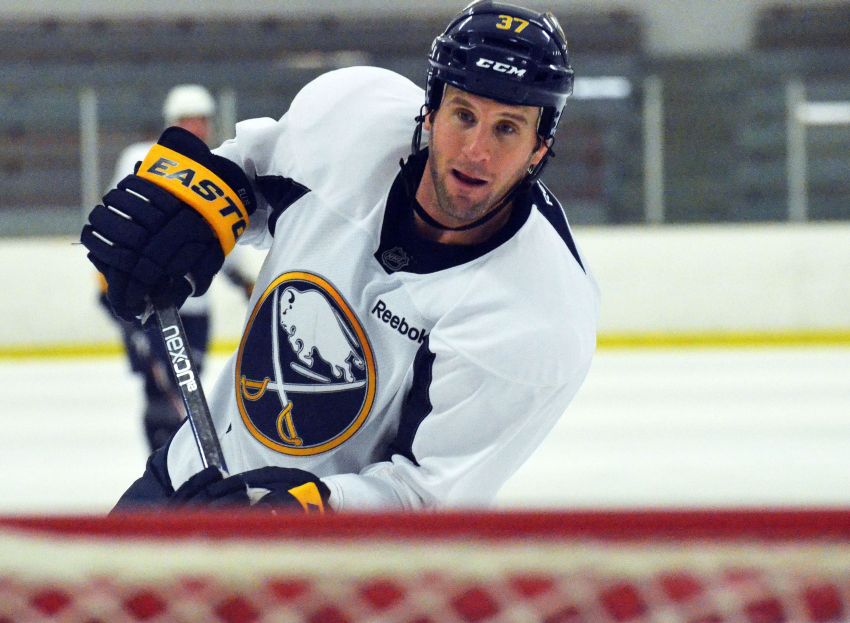 Matt Ellis believes players must get their “nose to the grindstone.” ©2013, Dan Hickling, Olean Times Herald

AMHERST – For the first time in the NHL’s agonizing 109-day lockout, players “know there could be an end in sight,” Buffalo Sabres forward Matt Ellis said today, “whether we are playing or whether we’re not playing.”

Of course, nothing’s finalized yet, but positive signs are emerging a schedule of 48 games or so could begin later this month. The NHL and the Players’ Association have been tight-lipped as they’ve exchanged detailed proposals over the last week – “playing Ping-Pong,” Ellis called it – a strong signal talks could be progressing.

NHL commissioner Gary Bettman recently imposed a Jan. 11 deadline for a new collective bargaining agreement and a Jan. 19 deadline to start the season. Both sides seem to be respecting the dates.

“Obviously, word has been pretty quiet right now, and I think that’s a good thing,” Sabres winger Drew Stafford said today after skating inside the Northtown Center. “That means they’re working. … Both sides seem like they’re focused on getting a deal done.”

In the meantime, the Sabres skating locally are ramping up their workouts. Today’s session had more zip than usual. With a shortened training camp possibly starting soon, players want to add more skates.

“You can actually say it’s time to get our nose to the grindstone and be ready,” Ellis said. “You lay it all out there for the next couple weeks and make sure you’re ready if need be. That’s the attitude we have right now.”

He added: “You can tell guys are starting to get ready and step it up a notch.”

Stafford said players must “prepare like we are playing in two weeks because if we don’t, we’re just cheating ourselves and we’re letting everyone else down.”

As Stafford and the others left the ice today, a group of children in town for a tournament kept saying hockey needs to come back.