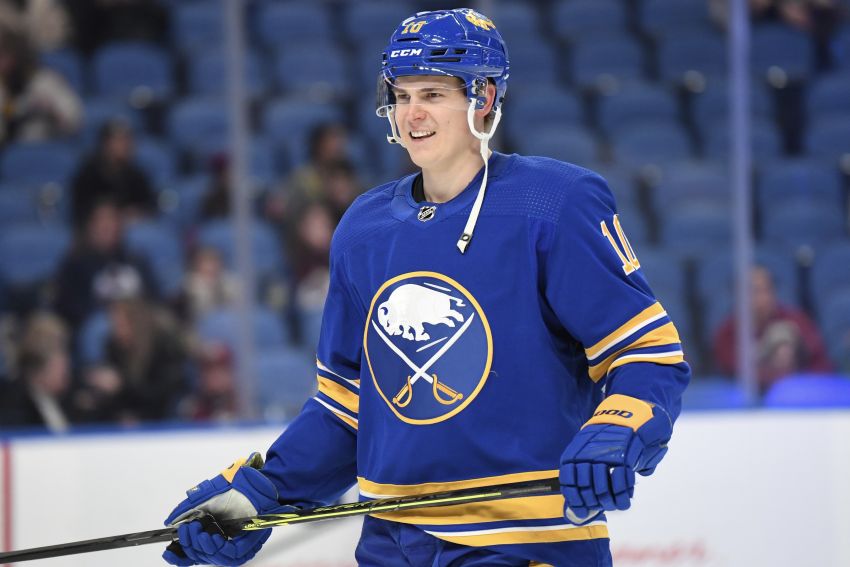 Coach Don Granato wanted to check with the medical staff before confirming any players would return.

“There’s a lot of guys really close, that as close as tomorrow’s lineup,” Granato said following Wednesday’s practice. “So … in likelihood, yes, guys will be back in the lineup, or a guy or two. If not tomorrow, based on what I just watched, they’re pretty darn close.”

Jokiharju is still on the active roster. If the Sabres want to activate the other players from injured reserve, they would have to make roster moves.

Winger Alex Tuch, who joined the Sabres on Nov. 4 in blockbuster trade with Vegas, said he has known Eichel since they were children.

“We’re the same birth year and our history goes way back, so there’s been a lot of times we played against each other, with each other on U.S. teams and stuff,” he said. “It is a little weird being traded for one another, I guess, especially when you know a guy.”

Tuch, who was acquired with forward Peyton Krebs and two high draft picks, said he doesn’t think of tonight’s game as himself versus Eichel.

“It’s not like I’m gonna go and stick him tomorrow or anything like that,” Tuch said. “It wasn’t our decision to get traded for each other.”

After spending about a week playing left wing, Granato shifted Casey Mittelstadt back to center on Wednesday, this time between Victor Olofsson and Kyle Okposo.

Granato moved Mittelstadt last week because he was having trouble moving following his return from another upper-body injury.

“He’s still progressing toward feeling good and better, and I think his skating is coming along and he can cover more ice with a faster recovery, less fatigue, doing it based on playing more games,” Granato said.

Granato said he’s “leaning toward” starting goalie Craig Anderson, 40, tonight. It would be the second time he tries to earn his 300th NHL win.

“He works at his craft,” DeBoer said. “I had Marty Brodeur play at 40. When you talk about players playing at 40, I had (Jaromir) Jagr, I had (Joe) Thornton, I think a goaltender playing at 40-plus or at that age is even more exceptional, because of know how athletic you have to be, the rigors on the body, the way your body has to move.

“So my hat’s off to him. He’s worked at it. He’s had a fantastic career. And I’m really happy for him.”