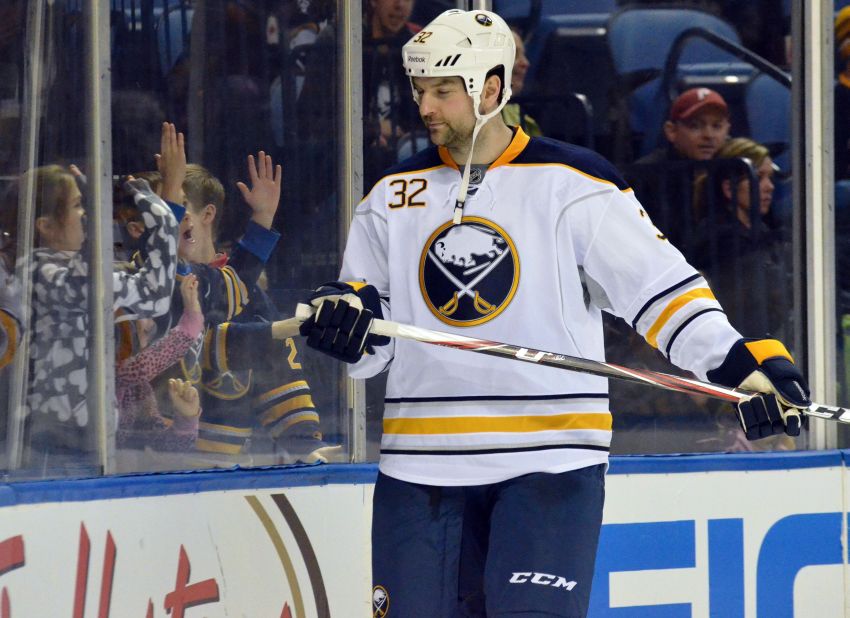 BUFFALO – John Scott, the stay-at-home Michigan Tech University defenseman, had no future playing big league hockey. Ten years ago, the NHL “really wasn’t on my radar at all,” the Sabres’ new enforcer said.

Scott was merely an average NCAA player. His hockey life would expire with his eligibility.

But Scott hadn’t yet grasped his 6-foot-8 stature could transform him into an NHL prospect. He possessed size, a precious commodity.

“My coach at Tech,” Scott recalled earlier this week inside the First Niagara Center, “he kind of took me under his wing and said, ‘You know, you can make a run at this. You can’t really teach size. So if you worked at it and worked on your foot speed and stuff, you could maybe make a living out of this.’”

Today, Scott’s the NHL’s biggest and arguably most intimidating fighter. The Sabres, a team in dire need of a true tough guy, signed the 280-pound heavyweight to a one-year, $600,000 contract in July.

What do they have in Scott?

Cody McCormick, the Sabres’ most prolific fighter the past two seasons, fought Scott in 2009.

“I held on and survived that,” McCormick said.

Some observers rank Scott undefeated in his 22 NHL fights, a number they say would be higher if opponents didn’t fear him.

“I’ve had some good fights,” Scott said. “Luckily, they’ve all gone my way so far. I don’t want to jinx myself and say anything.”

It’s likely Scott will only skate several minutes a game as a fourth-line winger, a position he learned in the NHL. He probably won’t dress for every contest, either. But even his presence on the bench and his name on the roster send a strong message.

“When you have a player of his magnitude when it comes to the physical sense, if somebody does do something really stupid against your team, they know they’re going to have to deal with somebody that’s really tough,” said Sabres coach Lindy Ruff, who called Scott “a real character” who’s great in the dressing room.

Sabres winger Steve Ott said: “He makes everybody in this room bigger.”

Some incidents during recent years, most notably Milan Lucic’s running of goalie Ryan Miller last season in Boston, exposed the Sabres as a soft team.

If Scott has his way, teams will stop taking liberties with the Sabres, he said. He’ll extinguish any fires.

“That’s why I’m here,” the St. Catharine’s, Ont., native said. “I don’t want stuff to go on. Whenever it happens and whoever it happens with, that’s my job. I’m here to prevent that stuff. So, yeah, if I was on the team last year I would like to think something like that wouldn’t happen. If it happens again, I’ll take care of it.”

Scott gradually developed the skills necessary to play in the NHL. Since the NCAA bans fighting and most players stay until they’re 21 years old, he had time to focus on his all-around game.

“College was a benefit for him,” Russell said.

“It went from no interest at all … to not quite a bit,” Scott said, “but my senior year I thought maybe I could have a shot at it.”

Finally, Minnesota signed him to an AHL contract in 2006 and sent him to its affiliate in Houston.

“It was a pretty tough guy my first fight,” Scott said. “I did well. It was off to the races from there.”

Scott earned an NHL deal midway through his first season, and he played 20 games with the Wild in 2008-09.

Early on, though, the job wore him down mentally.

“It’s not natural to kind of know you’re going to fight someone on a night-in, night-out basis,” Scott said.

Thinking about fights would give Scott butterflies or even keep him awake at night. He feared losing a bout would cost him his job.

“But I’ve learned to deal with that and kind of embrace it a little bit and whatever happens happens,” he said. “If I lose, there’s always another night. Move on from it.”

Despite the limited ice time, the 30-year-old believes his talents play a role as vital as any on the team.

“I think you play the hand you’re dealt,” Scott said. “I’m obviously not a goal scorer. I don’t have hands like some of the guys on the team. You know, I did what I had to do to get in the NHL, and this is my role.”

Along with five assists and 236 penalty minutes in his 146 NHL appearances, Scott has one goal, a rebound from the point he dragged and put past goalie Cam Ward on Nov. 15, 2009 in Carolina.