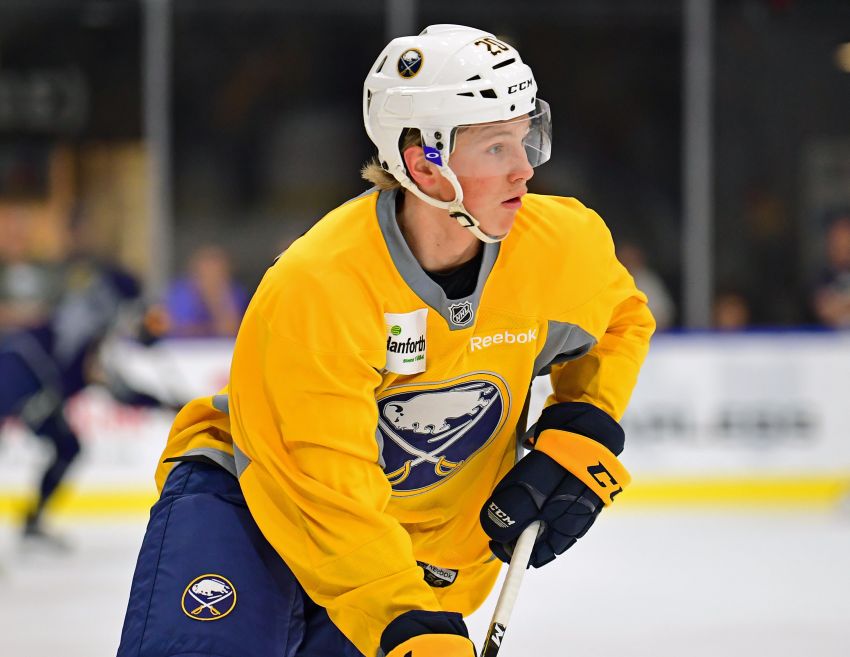 BUFFALO – Sabres prospect Oskari Laaksonen figured the text message from his agent couldn’t be true, that someone had to be playing a prank on him.

“I’m like, ‘No, this is something fake,’” the defenseman recalled Sunday following a session of development camp inside HarborCenter.

But the news Laaksonen received June 24 was real. The Sabres had just selected the unknown Finn in the third round, 89th overall, at the NHL Draft.

Laaksonen, 18, said he talked to a lot of NHL teams before the draft. If someone grabbed him, he thought he’d go in the fifth, sixth or seventh round.

Still, Laaksonen wasn’t even sure he would be taken.

“But it was a nice surprise,” he said.

Laaksonen’s selection surprised just about everyone. Even in this age of information, essentially only some statistics and his outdated height and weight were available to journalists and fans.

So when someone searched the internet for Laaksonen, they saw him listed at just 5-foot-9 and 130 pounds. When a fan on Twitter asked Laaksonen if he he was really that small, he responded with his current height and weight.

Of course, if Laaksonen ever comes to the NHL, it won’t be for years. He played most of last season with the Ilves under-20 junior team in SM-liiga, compiling six goals and nine points in 27 games.

“A lot of offensive creativity,” Laaksonen said of his style. “I like to make plays in the offensive zone, read the play and score points.”

Jeff Crisp, the Sabres’ assistant director of amateur scouting, called Laaksonen a “late-bloomer” at the draft. The Sabres tracked him for two years and even flew him to Buffalo for a pre-draft workout. They expect him to develop into a puck-moving defenseman.

“I knew they were really interested,” Laaksonen said. “That was the one team I was looking for in the draft.”

So why was Laaksonen so overlooked?

“I have never been on the national team,” he said. “That’s one thing. But I didn’t stress about it. I know my talents. I know that I get my chances.”

Laaksonen hopes he can get a chance this year in the Finnish Elite League.

“That was one of my goals, play there (with a) big role and big minutes,” he said.