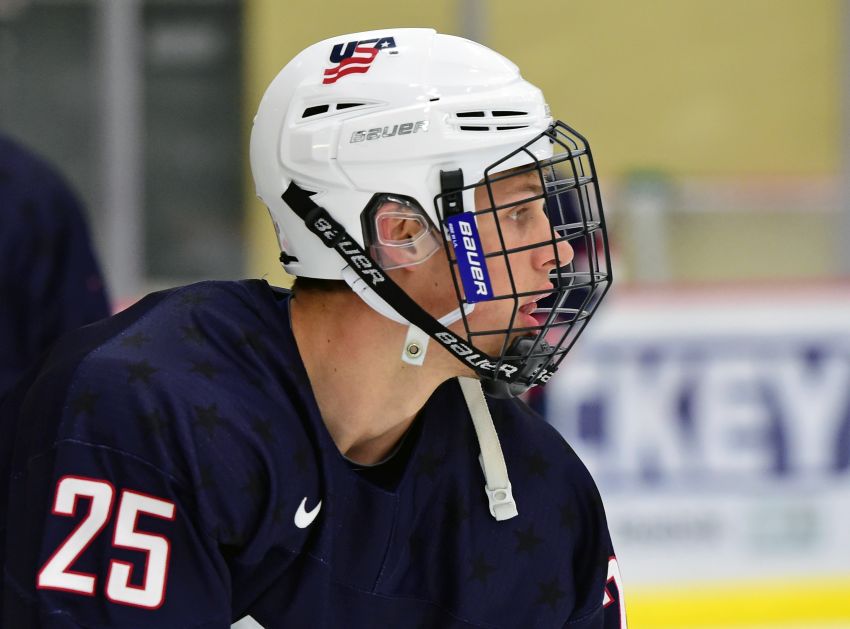 “He used to take advantage when I was a little guy,” Griffin Luce, 18, said Saturday following fitness testing at the NHL Combine inside HarborCenter. “He’s just really competitive.”

Luce, a 6-foot-3, 214-pound defenseman set to attend the University of Michigan next season, possesses the competitiveness that runs in the family.

That meant any competition – “Grandpa was big on the video games,” he said – often became fierce.

“We were both very competitive about stuff,” said Don Luce, who couldn’t control his laughter when a reporter relayed what his grandson said about their relationship.

Don Luce, 67, rarely won any Xbox matches when Griffin visited his Williamsville home. Still, if he beat his grandson, Griffin said he would “rub it in my face.”

“I think he gave me that competitive edge because I saw that in him as a player (and) in all aspects of his life,” Griffin Luce said. ‘He’s a really mellow guy, but he likes to win. He takes everything seriously.”

Luce has taken hockey so seriously he could be drafted anywhere from the third to the seventh round June 25 in Buffalo.

“I’m very proud of him,” Don Luce said. “He’s put in a lot of work. He’s a dedicated kid. He’s not going to be outworked. He’s put in the time and he’s listened. He’s listened to myself and his dad, even his older brother, (Harrison). I think he’s open, he’s very coachable.”

As his stats illustrate, Luce has embraced a defensive role.

“I’d say more of a shutdown guy,” he said. “That’s what I’m going to be at the next level, being able to shut down the team’s first line and playing penalty kill and not giving guys an inch.”

Luce, whose father, Scott, just spent 15 seasons in the Florida Panthers’ front office, was born in Wisconsin. He moved to Canada when he was two years old before coming back about five years ago.

He said he identifies more as an American, and joining the U.S. National Development Program in 2014-15 was a special experience that helped buoy his development.

“Going to the rink every day, putting on that sweater for your country, it’s a very special feeling,” Luce said. “You don’t really get used to it until you’re leaving, because you might not ever get that opportunity again.”

Having a father who has spent so much time in player development – Scott Luce was Florida’s director of amateur scouting and director of scouting – has certainly helped prepare him for the draft.

“He’s given me insight into what I should tell the people, what they should look for,” Griffin Luce said. “He knows best out of, I would say, everybody, because he’s been through this plenty of times, seeing many kids come through here. I think just preparing me best came from him – both mentally, physically.”