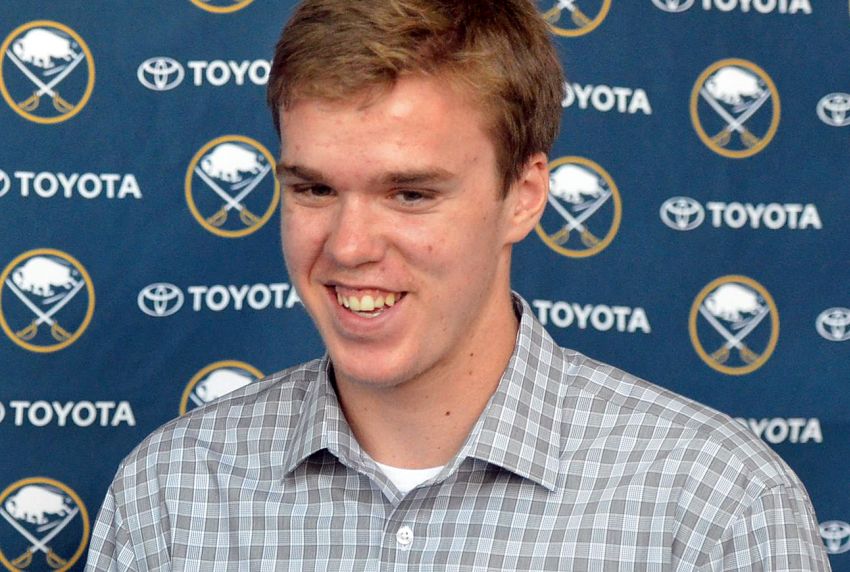 For good measure, he was even photographed with a Sabres banner behind him.

If you ask the junior superstar, he’ll acknowledge that, yes, he can envision himself wearing blue and gold come 2015.

“It’s a great organization,” the slick center said Thursday after touring the rink, where his Erie Otters will face the Niagara IceDogs in a Oct. 22 Ontario Hockey League game. “It would be an awesome spot to play.”

The prospect hailed as the next Sidney Crosby might be a once-in-a-generation talent.

But McDavid’s only human, you know. He understands the Sabres, the NHL’s worst team last season, could be wretched again in 2014-15. They also have three-first rounders next year.

McDavid’s so coveted many believe the NHL just changed its draft lottery odds to discourage teams from tanking the season for a chance to select him.

Thursday’s visit impressed him. He’s been to a couple of Sabres games, including the season finale last year. He’s playing just 100 miles away. His billets are huge Sabres fans.

“It’s a pretty nice spot,” he said about Buffalo. “The fans are crazy here.”

Of course, the NHL isn’t collegiate athletics; the Sabres can’t simply recruit McDavid here. But they can wow him and Jack Eichel, the consensus No. 2 pick next year, perhaps get the youngsters excited about Buffalo. Eichel’s scheduled to play a prospects game with Team USA here Sept. 25.

McDavid’s visit comes two months from today, the early portion of what could be a special season. The OHL granted him exceptional player status in 2012, meaning he was just the third 15-year-old to play in the league since 2005.

Even against older competition, McDavid, who’s listed at 6-feet and 185 pounds, thrived as a rookie, compiling 25 goals and 66 points in 63 games. He dominated last season, scoring 28 goals and 99 points in 56 games. He also earned a prestigious spot on Team Canada’s world junior squad as a 16-year-old, a rarity.

“Not only can he do certain things that few can do, but he can also do it at an incredible speed,” Otters coach Kris Knoblauch said. “His skating is off the charts.”

So is his maturity. While McDavid looks like a teenager, he sounds like a man. His answers are measured. He refused to say he had secured another spot on Canada’s roster. He wouldn’t speculate about NHL stardom.

“I guess I don’t even think about it,” McDavid said about being labeled the next great talent. “It’s something that’s a pretty good label to have on you. But it’s by no means what’s going to happen. I’m still 17 years old. There’s so much that could happen between now and next year’s draft or five years down the road, 10 years down the road. You have no idea what’s going to happen.”

“He doesn’t focus on the interviews and he doesn’t get caught up in what people say about him, where he’s supposed to be next year,” Knoblauch said. “Ultimately, (he) just enjoys playing the game.”