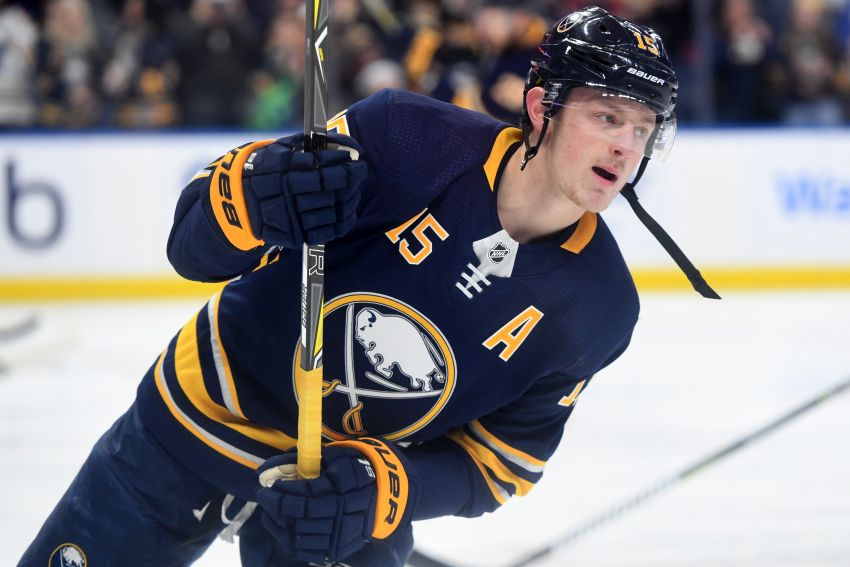 Jack Eichel has been on a tear. ©2018, Michline Veluvolu, Olean Times Herald

NEW YORK – Jack Eichel offered little explanation for his recent hot streak. The Buffalo Sabres center joked he took some vegetables out of his pregame meal.

Come on, Jack. Something clearly ignited you during the last month.

“I don’t really think I’ve changed too much,” Eichel said Sunday after the Sabres prepared for this afternoon’s Winter Classic against the New York Rangers at Citi Field.

Eichel can insist nothing has changed, but about a month ago, after the Sabres hit rock bottom with their third straight shutout loss, the third-year star started a tear he brings into today’s game.

It’s no coincidence the Sabres are 4-3-4 with Eichel compiling a gaudy eight goals and 15 points in that stretch. For the Sabres, who have only 10 wins all season, that qualifies as a hot streak.

“I thought earlier in the year there were some times where I was playing well and not getting rewarded, and I thought the same for our team,” said Eichel, who had only seven goals and 20 points in his first 27 games. “I think that over the last few games or so we’ve been a more consistent team shift in and shift out and it’s shown.

“We’ve figured out what’s made us successful and what we can do to put ourselves in the best position to win. I think that we’re all buying in a little bit better now. I think we’re starting to come together and things have been better, but we still have a long way to go.”

Eichel, 21, has quickly morphed into the Sabres’ MVP. Right now, the second overall pick in 2015 might be playing the best hockey of his 180-game career.

The Winter Classic, of course, is the NHL’s marquee event regular-season event, a time non-hockey fans tune into a game broadcast nationally on NBC just for curiosity’s sake.

If Eichel delivers a memorable outing before millions of viewers, he could become a more recognizable name in some parts of the country.

Sure, the Sabres, who hosted the first Winter Classic in 2008, might be celebrating the game’s 10th anniversary. Still, the NHL probably wanted the team, which hasn’t made the playoffs since 2011, partly because of Eichel and some of the other youngsters.

“You’re starting to see when Jack’s our best player, we’re winning a lot of games,” said Sabres winger Jason Pominville, who played in the first Winter Classic. (Defenseman Rasmus Ristolainen) and those guys are guys who are relied upon to play in every situation, to be leaders on this team for a lot of years.

“It’s been fun to see those guys play because they’re good players now and I think the sky is the limit as far as what they can bring to this franchise.”

“They were tough,” said Housley, a rookie coach. “We learned from that how we have to prepare, what it’s going to take to win in this league. … But at that point, Jack (really took) his play to another level. It was great to see, he’s a leader, he leads by example. You can see by his play on the ice.”

He added: “If you look at our games in the last two weeks, we’ve really played solid hockey, especially against really good competition, teams that are in playoff positions.”

Housley believes the unique game could boost the Sabres. He noticed how much they enjoyed their nearly 60-minute practice in chilly conditions – the wind made the temperature feel much colder than the mid-teens – at the home of the New York Mets.

“We get out there, it just sort of all of a sudden hits you that you’re playing in the Winter Classic game,” Housley said. “You’re sort of awestruck just with the depth perception of where the fans are.

“But once you get on the ice it’s just great being outdoors. It really brings you back to your childhood and the memories that you created growing up. I know everybody’s got their own examples, but guys were energetic today, you could see it out on the ice.”