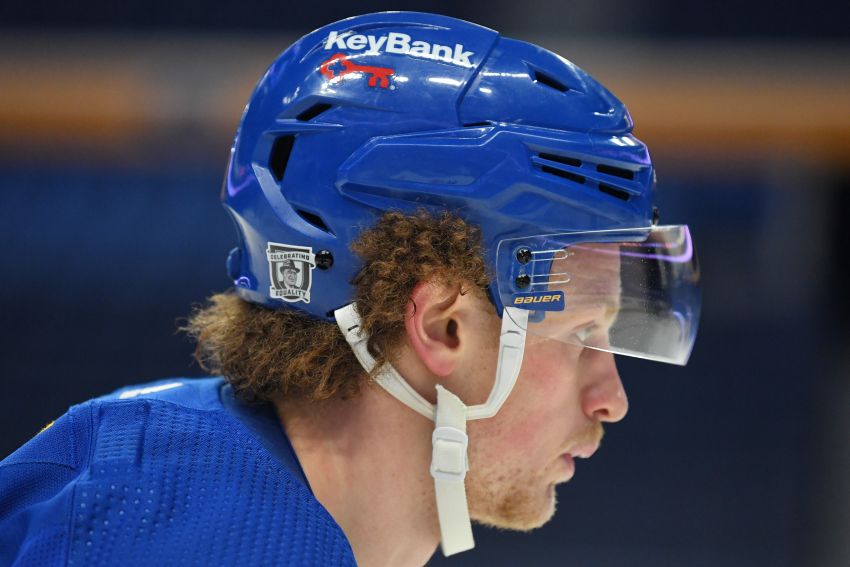 BUFFALO – Three weeks ago, Sabres captain Jack Eichel felt confident he would shake off his underwhelming start and, in his words, begin to “take off.”

Eichel, understandably, had trouble adjusting to the dizzying pace of the schedule earlier this season.

An upper-body injury sidelined him the first five days of an abbreviated training camp. Then he played 10 games in 18 days following barely a week of practice.

So the COVID-19 pause that began Feb. 2 helped refresh Eichel, who used the time off to rest his body and study video of his exploits from last season.

But Eichel, 24, hasn’t resembled his old self since the season resumed. In seven outings – a lower-body injury shelved him two games last week – he has registered zero goals and three assists.

In 17 games this season entering tonight’s road contest against the New York Rangers, Eichel has scored only two goals and 14 points. His shooting percentage is just 3.8. Last season, it was 15.9%.

Incredibly, Eichel has mustered only one goal and five points at even strength.

Instead of solidifying his place among the NHL’s elite centers, Eichel might be enduring the worst season of his career. It certainly looks like it could be the most turbulent.

“For me, it’s a confidence factor and he needs to stick with it and persevere here,” Krueger said following the Sabres’ 3-2 loss to the New York Islanders.

So why hasn’t Eichel looked anything like the player who generated MVP chatter while scoring 36 goals and 78 points in 68 games last season?

A scout who has watched Eichel throughout his career said he believes the lack of personal and team success is weighing on him. By now, after six seasons, he was supposed to have helped them morph into a perennial Stanley Cup contender.

Instead, he has yet to sniff the postseason. Considering the Sabres rank last in the loaded East Division, their playoff drought will likely hit 10 seasons, a stunning number that would tie the NHL record.

“He looks to me like an unhappy camper,” the scout said. “I have noticed it more this year. It’s my guess he knows it’s not working here. Yeah, he’s been nicked up a bit with some injuries, but nothing that should be keeping him at two goals.”

When Eichel was a surprise scratch after skating in Thursday’s pregame warm-up, it was believed the injury he suffered Tuesday in New Jersey kept him from playing. While he finished the 4-1 win against the Devils, he appeared to hurt his ankle or foot in a collision with Nico Hischier.

Then after Sunday afternoon’s 3-0 loss to the Philadelphia Flyers, Eichel said he was hurt Tuesday.

Why aren’t Eichel and Krueger on the same page?

Krueger said Sunday there was no miscommunication over Eichel’s injury and he did not hide it for a bit of gamesmanship.

His answer, however, was puzzling.

“When I mentioned it, the specific region that actually took him out of the game the first time I’d heard about it was warm-up,” Krueger said. “But that he was injured and he came out of the Jersey game injured was clear to me. But it turns out there were multiple lower-body injuries and whatever. The point is that he came out of Jersey hurt.

“The warm-up call and the region that ended up being aggravated, it was his first time back in his skates that game and it changed the game. Now we’re working on his health and getting him fit again. I definitely didn’t do gamesmanship there; it was just that we had hoped he was going to play that game.”

Notes: The Edmonton Oilers claimed goalie Alex Stalock on Monday. There was speculation the Sabres might be interested in him because a lower-body injury will sideline No. 1 goalie Linus Ullmark at least one month. … The Sabres sent defenseman Brandon Davidson back to the taxi squad on Monday. … The Sabres did not practice Monday.

7 thoughts on “Why is Sabres captain Jack Eichel having such a down season?”