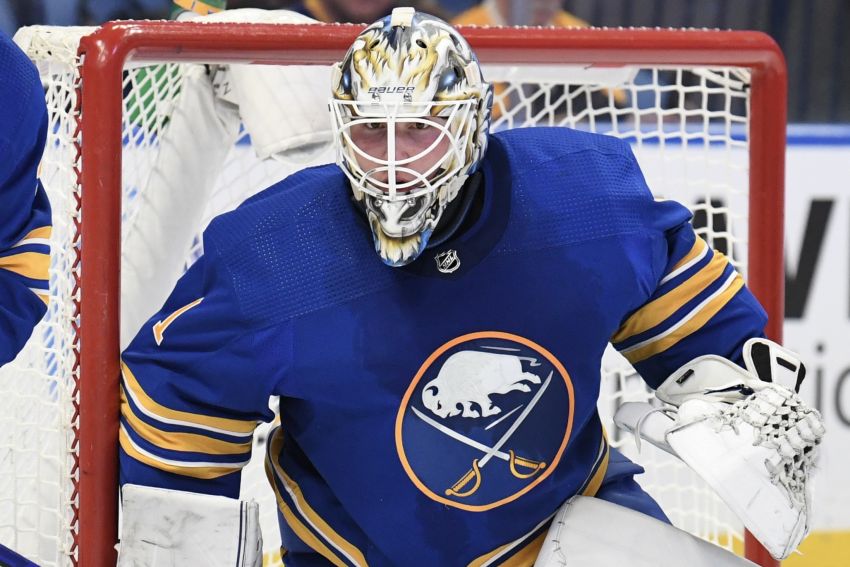 BUFFALO – Ukko-Pekka Luukkonen’s terrific 32-save outing in Saturday afternoon’s 3-1 preseason win likely won’t sway the Sabres. They decided months ago that the Finn, a prospect labeled as their goalie of the future, should start the season in the minors.

So as they trim their training camp roster in the coming days, they’ll almost certainly assign the him to Rochester, where he will carry the load for the Americans.

Buffalo’s net, at least early in the season, will belong to veteran Craig Anderson and newcomer Eric Comrie.

“As (general manager Kevyn Adams) said, it’s about the starts and becoming a better goalie,” Luukkonen said after the Sabres defeated the Pittsburgh Penguins before an announced crowd of 10,908 fans at KeyBank Center.

The 6-foot-5, 215-pound Luukkonen, having battled injuries over his first three pro seasons, has played just 59 times in the AHL since 2019-20. He missed all of the Amerks’ 10-game playoff run last season recovering from a lower-body injury.

Still, Luukkonen, 23, has often looked sharp during his recalls, including last season, when he compiled a 2.74 goals-against average and a .917 save percentage in nine games.

Coach Don Granato believes Luukkonen used those starts with the Sabres to shape his offseason training and become a better netminder. For example, he said this year the youngster has been doing a better job fighting for his ice.

“That was one thing we looked at last year with getting him games last year, was to develop that hindsight even when he went into an offseason of training,” Granato said. “What is he training for? What was he challenged with? He had some success last year, but there was enough there to say, ‘I need to get better, too.’

“And I think he internalized that well and we’re seeing that growth.”

The Sabres have been upfront with Luukkonen about their plan. When the Sabres signed Comrie on July 13, Adams called him and told him they still believed in him.

“It’s more about starts for him,” Adams said when camp opened Sept. 22. “It’s less about where he gets his minutes, more about him getting his minutes. And I truly believe that. Because he’s had some challenges with injuries and just getting himself into that rhythm of having that foundation to build on.

“What I’ve talked to him about is we believe in him, we believe in him 100 percent, he’s going to be a very good National Hockey League goalie. What I want to do is, when he’s here, he’s ready. And not just here to be here.”

Luukkonen said: “It helps getting the call from Kevyn. I appreciated that.”

Granato said he often tells players “you can be frustrated, don’t play frustrated.”

“Just plow through it and make sure you get your job done,” he said. “(Luukkonen) definitely put the work in this summer. He looked great from Day One and it was nice to see him out there. Very good performance today.”

Luukkonen made several splendid saves during second preseason start, including a point-blank stop on ex-Sabre Drake Caggiula early in the second period.

Ten minutes after Tuesday’s 2-1 win, goalie Malcolm Subban sat at his locker smiling, soaking up his 12-save relief appearance in the Sabres’ 2-1 preseason win over the Philadelphia Flyers.

“It meant a lot – more than you think,” Subban told the Times Herald following his first appearance since suffering a wrist injury Jan. 11.

If Subban, 28, had stayed healthy last season, he likely would’ve earned more starts as COVID-19 and injuries forced the Sabres to use their sixth goaltender of the year.

Instead, his season ended after just nine total appearances, including four with the Sabres, who acquired him from the Chicago Blackhawks on Dec. 2.

Subban said he talked to a sports psychologist and others about how he should approach his his rehab.

“You either just wait until you’re healthy again and then try to get back to where you were, or you can make sure that when you’re back you’re better than you were before, and that was kind of my goal in every aspect, to make sure that I’m a better professional and more ready to go, more prepared to go,” he said. “So a lot of patience, and when I get out there, I was like, this is what I’ve been working toward.”

Subban backed up Luukkonen on Saturday.